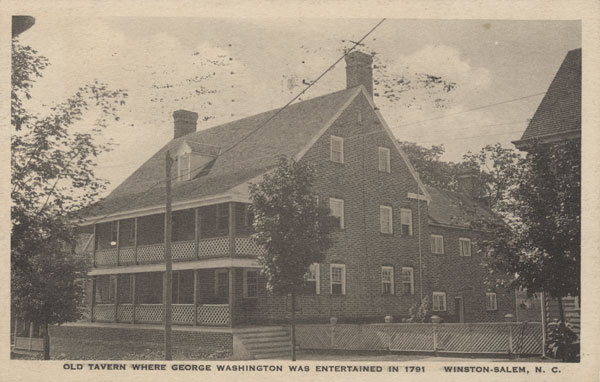 Washington's southern tour, which began on 9 Apr. 1791, was a journey that George Washington had been contemplating since before his inauguration as president of the United States. In May 1789 he decided to visit every state in the country "in order to become better acquainted with their principal characters and internal circumstances." He began traveling shortly after taking office. He had been to all the northeastern states by the end of August 1790 but had delayed a trip to the southern states largely because one of them-North Carolina-had yet to ratify the U.S. Constitution. Once that was accomplished, on 13 Nov. 1790, he started making plans to journey to the South.

With a carefully devised "line of march" and accompanied only by his senior secretary, Maj. William Jackson, and a handful of servants, Washington left Mount Vernon to investigate conditions in three states he had never seen: North Carolina, South Carolina, and Georgia. He traveled in a lightweight carriage; a wagon, the only other vehicle in his simple entourage, followed with his luggage.

By 16 Apr. 1791 Washington had passed through Virginia and reached Halifax, N.C. He found the town less than impressive: "It seems to be in a decline & does not it is said contain a thousand souls." From Halifax he made his way to Tarboro, where he encountered a humble but sincere welcome. On 19 April he "dined at a trifling place called Greenville" and then headed off in the direction of New Bern accompanied, much to his regret, by the Pitt Light Horse. (Of all the endless annoyances Washington encountered while traveling, he found none to be a greater nuisance than breathing the dust of other men's horses.)

Everything about Washington's stay in New Bern seemed to delight him, including his "exceedingly good lodgings" in the home of John G. Stanly, the entertainments at the Tryon Palace, and the beautiful women with whom the town apparently was amply endowed. His only complaint, certainly a minor one, involved the failure of his hosts to offer him griddle cakes during his stay.

Washington had nothing positive to say about the accommodations or the countryside between New Bern and Wilmington, but he found his reception in Wilmington, where he spent two days, nearly equal to what he had experienced in New Bern. He left Wilmington on 26 April, destined for South Carolina and Georgia.

After stops in Charleston, Savannah, Augusta, Columbia, and Camden, Washington returned to North Carolina on 27 May. Thirteen members of the Salisbury Military Company rode with him to Charlotte, which, like Greenville, he found to be a "trifling place," although he did enjoy dinner at the home of Gen. Thomas Polk. Congressman John Steele, who would later become a part of his administration, joined Washington in Charlotte and accompanied him to Salisbury. His impressions of Salisbury and Salem were favorable.

Governor Alexander Martin met Washington in Salem. The president was eager to learn what North Carolinians thought about their new ties to the federal government. Martin assured him that opposition to ratification was fast dissipating, that North Carolina officials would soon be taking oaths to uphold the Constitution, and that the state had no sympathy with land companies that attempted to usurp lands the federal government recognized as belonging to Native Americans. That was all good news. The next day, 1 June, Washington and Martin surveyed the location at Guilford Courthouse where Americans under Nathanael Greene and Englishmen commanded by Lord Charles Cornwallis had fought just a short decade before. While around Salem, Washington also visited Kernersville during his 1791 tour.  At the time, the community had not received the name Kernersville.  Washington visited "Dobson's" -- a tavern located at Dobson's crossroads to have breakfast. This area would later become Kernersville.

The Guilford Courthouse visit marked the end of Washington's southern tour. The rest of his trip was largely a matter of returning home, and by 12 June he was back at Mount Vernon.