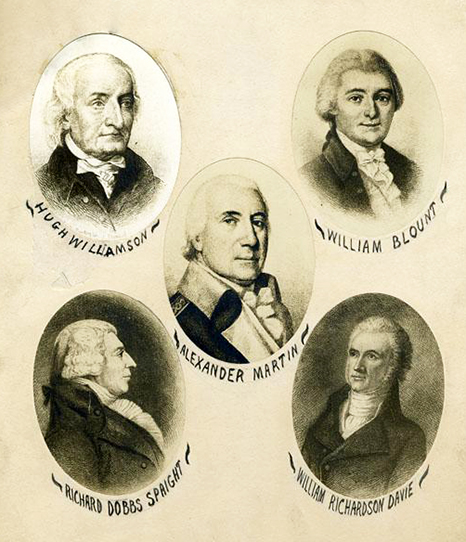 The U.S. Constitution, completed on 17 Sept. 1787, was signed on behalf of North Carolina by William Blount, a native of Bertie County; Richard Dobbs Spaight, a native of New Bern; and Hugh Williamson, a native of Pennsylvania. The North Carolina legislature of 1786-87 without enthusiasm had approved the call for a revision of the Articles of Confederation. On 6 Jan. 1787, the final day of the session, it chose Governor Richard Caswell, William R. Davie, Willie Jones, Alexander Martin, and Spaight to be its delegates to the Constitutional Convention, scheduled to meet in Philadelphia. Jones opposed the idea of a central government any stronger than that provided by the Articles of Confederation and declined the appointment. Caswell was not well and did not attend, but he named Williamson on 14 March and Blount on 24 April to fill the two vacancies.

With the exception of Martin, each of these men was strongly Federalist and favored a more powerful national government. Williamson proved to be the most active member of the North Carolina delegates, speaking frequently and serving on several committees. Williamson and Spaight were present from the time they reached Philadelphia until the convention adjourned, but Davie and Martin left early and did not sign the Constitution. Blount was present at the end but had been absent much of the time because he was also a member of the Continental Congress, then in session in New York City.