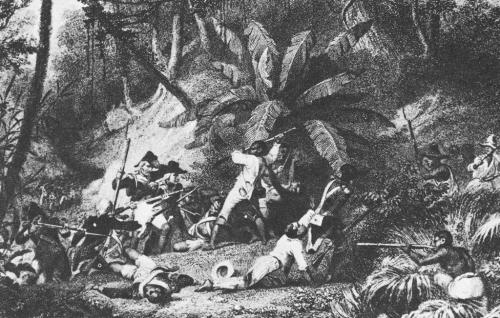 Slave rebellions were a recurring fear in North Carolina throughout much of its early history, although the state never experienced a large-scale revolt. Instead, it responded to internal rumors and rebellions that occurred in other states. The first major shock to white North Carolinians came in 1739, when slaves in South Carolina orchestrated the Stono Rebellion. Because it took place near the North Carolina border, the insurrection induced North Carolina slaveholders in 1741 to restrict their slaves' ability to carry guns.

The period between 1775 and 1800 was a turbulent time for North Carolina slave owners, as the American Revolution destabilized race relations in the state. As the people won independence from Great Britain and then struggled to define the new American nation, they kept a constant watch over their slaves. Many slaves were themselves involved in social and political pursuits. Black men fought for both sides in the Revolutionary War, and many supported the principles of liberty and democracy. During the war, white North Carolinians investigated numerous rumors of slave revolts. In 1775 whites in Wilmington gained peace of mind by disarming all blacks, imposing a 9:00 p.m. curfew, and requiring an oath of allegiance from their slaves. A posse of Beaufort County whites rounded up more than 40 African Americans believed to be plotting an insurrection, including the 2 alleged leaders. These men reportedly planned to kill white families and burn their houses on 8 July 1775 as they traveled to "black country" for weapons and a new black-led government.

Reacting to disturbances in the West Indies, especially the bloody Saint Domingue (Haiti) revolt in 1791, North Carolina restricted the influx of Caribbean slaves in 1794. A year later the law was revised, and in 1798 Governor Samuel Ashe banned the importation of all West Indian slaves to permit the state to settle its own domestic difficulties. A Granville County slave named Quillo had organized a massive revolt to take place in April 1794. His failed plan included holding elections for an African American government and uniting with insurrectionists in neighboring Person County to kill all in their path. In 1798 three slaves, arrested in Bertie County for planning a revolt of 150 slaves, received 39 lashes after being found guilty of a high misdemeanor.

The alarm of a "slave conspiracy" in 1802 actually involved a series of actions taken by whites in response to threats of a slave revolt. Arrests, trials, and the execution of two slaves in Nottoway County, Va., in January 1802 proved to be the beginning of two successive waves of conspiracy scares. The first wave was confined to southeastern Virginia, except for brief excitements in Halifax and Northampton Counties, N.C., during February. The second wave began with new suspicions in Halifax County, Va., in April and spread rapidly to nearly all of eastern Virginia and North Carolina. Discovery of an alleged plot to burn Norfolk prompted slave arrests, trials, and executions from Currituck County eastward and southward in late May and June. Annapolis, Md., was also affected.

White panic was especially evident in Bertie County, where 11 slaves were executed. Others were put to death in Hertford, Halifax, Edgecombe, Currituck, Camden, and Perquimans Counties. Altogether, about 19 slaves were executed in North Carolina and 10 in Virginia, in addition to numerous others reportedly killed by vigilantes and militia. Many more suffered whippings, the cropping of ears, and deportation. Neither trials nor investigations in both states produced credible evidence of actual plotting, but public tranquility did not return until midsummer. Some tightening of slave codes resulted, but there were no further widespread alarms in this area for nearly three decades.

Two rumors of slave rebellions, both originating in Virginia, swept through North Carolina prior to the Civil War. The first followed the brutal murder of 59 white men, women, and children in Southampton County, Va., under the direction of a self-anointed slave preacher named Nat Turner on 21 Aug. 1831. Turner's revolt elicited waves of North Carolina militia seeking to protect the state from similar unrest. One group, the Governor's Guards, reportedly killed 40 slaves while helping to suppress a rebellion in Cross Keys, Va. In this climate of heightened fear, white North Carolinians discovered a suspected uprising in Duplin County, where after hours of torture on 5 Sept. 1831 a slave confessed to devising the plot. On 4 October the insurrectionists were to begin marching south to Wilmington, killing white families along the way; on the coast they would be joined by a force of about 2,000 blacks and blaze a path of destruction on their return north to Fayetteville. The alleged leaders-slaves named Dave and Jim-were killed by a mob on 9 Sept. 1831. Their deaths did not stop the spread of terror to Wilmington, where on 17 September, several slaves confessed to planning an additional revolt.

Several years later John Brown, a white abolitionist of questionable mental stability, led an ill-fated raid on the arsenal at Harpers Ferry, Va. (now West Virginia) to procure weapons for a slave revolt to end slavery. In the attempt, Brown and his men were captured on 16 Oct. 1859 by U.S. Marines under the command of Col. Robert E. Lee. While initial reports in North Carolina exaggerated Brown's numerical strength, the seeming disinterest of black North Carolinians prevented the panic that followed the Nat Turner Rebellion. Nevertheless, in the wake of the raid numerous state newspapers clamored for a better slave patrol system. Black social outlets, including churches, were restricted as white North Carolinians perceived Brown's plan as part of a larger northern conspiracy to undermine southern society. Although his mission failed, Brown inspired a backlash among whites against all things "non-southern," which intensified the sectionalism in North Carolina leading to secession and theCivil War.