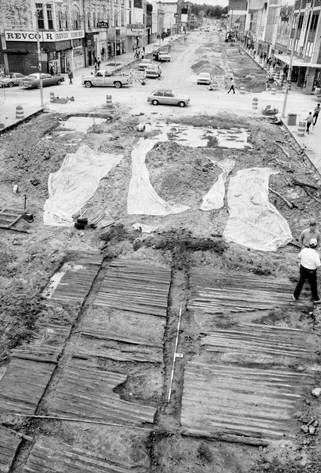 Roads made of several different materials have been common in North Carolina during various eras of its history. One of the earliest attempts at road building in the state was the construction of corduroy roads leading from Albemarle Sound in present-day Perquimans and Pasquotank Counties. The roads were created by laying logs lengthwise along the roadway, crossing them with small cuttings, and adding sandy soil to hold them in place. Although this method was common in swampy areas of northeastern North Carolina, it failed to become widespread elsewhere in the state. One of these early "floating roads" between Elizabeth City and the Camden County line was used until 1922, when it was replaced with a more modern surface.

Between 1836, when a successful Canadian experiment with plank roads became known, and 1860, when the Civil War ended their support and maintenance, North Carolina roads were commonly made of wood. During this period, so-called plank road fever accounted for 84 chartered roadways, of which some 500 miles were constructed using state and private funds estimated from $300,000 to $800,000.

The concept of the plank road was especially popular in areas where forests were abundant and wood was relatively inexpensive. The roadways were constructed of pine and oak sills six to eight inches thick placed on an adequately drained roadbed and covered crosswise with planks eight inches wide and at least three inches thick. The planks were then covered with gravel or sand, which was hardened by horse droppings into a firm surface. The Fayetteville & Western Plank Road, a toll route between Fayetteville and Bethania in Forsyth County covering 129 miles, has the distinction of being the longest wooden highway ever constructed. Built of oak and pine between 1849 and 1854, it was abandoned in 1862. Although plank roads served the purpose of rising above the mud in many places, they ultimately fell into disuse and disrepair due to insufficient maintenance.

Macadam roads, which gained popularity at the end of the nineteenth century, were an integral part of the state's modern attempts to improve roadways. Named for their inventor, Scottish engineer John L. McAdam, macadam (or macadamized) roads helped North Carolina rebuild its state and local highway system after nearly 40 years of neglect caused by the destruction and loss of capital that followed the Civil War and Reconstruction.

Before the advent of macadam roads, many North Carolina roadways were little more than wide clay paths. Rutted and dusty when dry and nearly impassable when wet, clay roads made travel very difficult and hindered the movement of goods to market and to rail stations. The macadam process helped to change all that because it required roadways to be graded so that they drained properly. More important, the graded roadway was covered with five to nine inches of crushed stone, creating a solid, stable base that was then rolled with a steam-powered roller, sprinkled with water, covered with dust, and rolled again. The addition of the dust served to repel water and helped to bind the stones together by filling the spaces between them. Later, a "bituminous" or liquid asphalt binder replaced the water binder. In many cases, macadam roads, covered with asphalt, became the foundations of new roadways.

Although in 1838 an internal improvements committee meeting in Raleigh had sought to gain state financial support for the construction of North Carolina's first macadam road, few if any were built until around 1880, when Charlotte mayor William Johnston implemented a plan to macadamize the Queen City's clay roads. After Charlotte covered five miles of road with stone pavement (at a cost of approximately $25,000), Mecklenburg County moved to improve roads outside the city. Several years later, Capt. S. B. Alexander influenced the State Senate to pass the Mecklenburg Road Law of 1885, which called for the use of convict labor and the implementation of a local property tax to help pay for road construction and improvement. With the money raised from the new tax and cheap labor supplied by inmates, Mecklenburg County was able to complete 30 miles of macadam road by 1894 and 75 miles by 1900.

Many other counties, including Forsyth, Iredell, Cabarrus, Alamance, and Wake, soon enacted improved road laws. With a few exceptions, such as New Hanover County's experiments with building roads of oyster shells, almost every new road project in North Carolina called for macadam. By 1910, however, many of the roads had deteriorated due to increased automobile traffic and damage from freezing water. Because macadam roads were so expensive to build and maintain, most counties stopped building them. In 1912 the state boasted 1,232 miles of macadam roads, but by 1929 the figure had plummeted to 313 miles. Many of these roads were in mountain counties where stone was more plentiful than sand. The macadam roads are at least partially responsible for three important advances: improved travel and communication, the advent of Rural Home Delivery, and far greater mobility to move agricultural and manufactured products around the state.

Sand-clay roads became a cheap and popular alternative to paved roads in much of North Carolina early in the twentieth century, especially starting around 1910. They were made by mixing sand with clay, proportioned so there was just enough clay to act as a binder for the sand. The related topsoil road was made of earth found near the road already naturally mixed in usable proportions of sand and clay. Sand-clay roads were most often found in the South, particularly in Georgia, North Carolina, South Carolina, and Texas. In North Carolina, there were 4,313.5 miles of county sand-clay roads in 1914-double the mileage of 1912. These roads held up well under horse-drawn vehicles and light automobile traffic. The sand-clay road has remained useful for certain routes, mostly rural secondary roads where asphalt is not needed.

Asphalt came into widespread use later in the century, with great improvements developed for military purposes during World War II. State road construction was given a boost by the federal government in 1956, when Congress passed the State Highway Act, designating billions of dollars for highway construction. North Carolina has one of the largest highway systems in the nation, with 78,000 miles of paved roads.