North Carolina writers and scholars support a number of literary publications in the state and have for decades. The Carolina Quarterly, one of the oldest and most influential university literary publications in the United States, traces its origins to the University Magazine, founded by a committee of senior students at the University of North Carolina at Chapel Hill in 1844. Financial difficulties ended the University Magazine's initial run after only ten issues, but the publication was revived largely under the influence of university president David Lowry Swain in 1852. It came to be filled with short histories, poetry, literary criticism, occasional commencement addresses, and reflections upon social issues of the day. Of particular value are short histories and biographies of North Carolinians and events contributed by UNC professors and other state leaders. Despite Swain's support, the magazine continued to face financial difficulties until 1859, when the university's two student literary societies became financial backers. 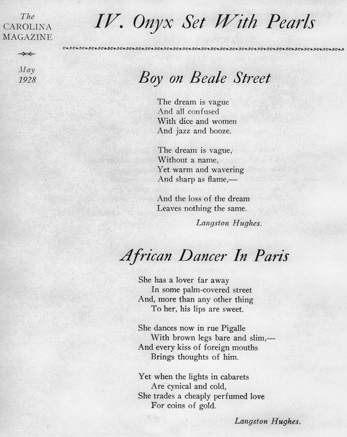 Difficulties linked to the Civil War caused the University Magazine to fold again in 1861. It was revived in 1882 through the efforts of student leaders. Fifteen years later, the two campus literary societies again began to back the publication. The year 1923 saw it receive direct funding from the student body through the creation of a Publications Union; in 1929, under the new North Carolina Magazine moniker, it became a supplement to the student newspaper by campus vote. In 1941 editor Henry Moll refashioned the magazine in the image of that day's popular press with features, interviews, and reviews of a nonliterary bent. The following year it merged with the campus humor magazine, Tar 'N' Feathers, causing a clash between the publication's humor and serious literary endeavors. Student pressure for a full-fledged humor publication led to a student referendum on the content of the magazine in 1948, and the University Magazine lost to the humor magazine Tarnation by four votes.

After the split, however, there was an immediate student outcry, and a petition was started for the creation of a campus literary magazine, the result of which was the founding of the Carolina Quarterly. During the early twentieth century, student writers such as Josephus Daniels, Phillips Russell, Jonathan Daniels, Paul Green, Thomas Wolfe, LeGette Blythe, Walker Percy, Joseph Mitchell, Walter Spearman, and Frances Gray Patton had exhibited their work in the pages of the University Magazine and the North Carolina Magazine. After the establishment of the Carolina Quarterly, the tradition of publishing new and emergent writers continued, although contributors were no longer limited to university students or even North Carolinians. The many fine writers and poets who have had their work published in the Carolina Quarterly include Richard Ford, Charles Wright, Fred Chappell, Lewis Nordan, Robert Morgan, and Cathy Song. The publication continues to be edited by students of the university.

Now more than a century old, the South Atlantic Quarterly, from the time of its first publication in 1902, has sought to inspire, enlighten, and even outrage its readers. The journal was the creation of its first editor, John Spencer Bassett, a Trinity College (now Duke University) history professor who represented a new generation of southern intellectuals. Born and raised in the post-Civil War South, this generation sought to move their native region into a brighter future through education and the free exchange of ideas. Bassett himself trained to become a historian at Johns Hopkins University in the 1880s, which was at that time an enviable position in the most innovative graduate program, a veritable haven for aspiring southern scholars. Bassett came to Trinity College in the mid-1890s, a time when North Carolina's political situation was filled with animosity and division that ran along both racial and social lines.

Following the Wilmington race riot of 1898 and the white supremacy political campaign of 1900, a campaign noted for its inflammatory use of antiblack rhetoric, Bassett was disgusted at the political and social scene in the state. True to his generation's outlook and professional training, Bassett became convinced that North Carolina and the South needed a literary magazine that would both educate its readers and provide intellectuals a means of escape from the tension-filled world of politics. The South Atlantic Quarterly was established in Durham to fill that need.

The journal offered a variety of articles on history and social commentary. Its contributors were some of the brightest minds of the new generation of southern scholars, including U. B. Phillips, William E. Dodd, Samuel Chiles Mitchell, and Edwin Mims, as well as Bassett himself. The South Atlantic Quarterly captured regional and national attention in 1903, when Bassett published the article "Stirring up the Fires of Race Antipathies," in which he criticized the white South for appealing to emotion rather than principle during its ascension back into political power. While that point itself would not have won many friends, Bassett worsened the negative reaction by daring to list Booker T. Washington alongside Robert E. Lee as the two greatest southerners born in the nineteenth century. The reaction was fast and furious, testing the extent of the journal's devotion to free speech and the open exchange of ideas-a test the South Atlantic Quarterly passed by virtue of its continued support for its besieged editor.

Successive editors during the mid-1900s maintained the journal's commitment to social commentary and the advocacy of education. The South Atlantic Quarterly also continued its explorations into the ever-changing world of literature, poetry, and historical interpretation while persisting in its cautious support of civil rights for African Americans. The journal expanded its interests during these years to include foreign affairs, featuring articles that examined the rise of fascism, Nazism, and communism before these were widely known and feared by the American public. The South Atlantic Quarterly continues to provoke, inform, and startle. In the last two decades of the twentieth century, entire issues were devoted to one theme, such as the works of Ezra Pound, the rise of maternalist feminism, and analyses of country music.

Throughout the twentieth century, North Carolina continued to spawn literary journals and critical reviews. Such publications include the Southern Literary Journal, founded in 1968 and published by the Department of English at the University of North Carolina at Chapel Hill, and the North Carolina Literary Review, founded in 1992 and published jointly by the Department of English at East Carolina University and the North Carolina Literary and Historical Association. The Appalachian Journal, founded in 1972, is an interdisciplinary, peer-reviewed quarterly featuring research studies, interviews, scholarly studies in various fields, and a variety of other items, as well as poetry and reviews of books, films, and recordings focusing on the Appalachian region. Started in the mid-1990s, the Asheville Poetry Review is a literary journal that publishes poems, interviews, translations, essays, historical perspectives, and book reviews. Many journals also exist in small publication, including various regional reviews and campus literary magazines, representing the entrance to a world of academic or literary publication within the state.

Langston Hughes poems featured in the May 1928 issue of the Carolina Magazine, one of the several incarnations of the modern-day Carolina Quarterly. North Carolina Collection, University of North Carolina at Chapel Hill Library.