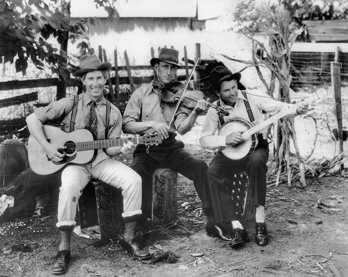 Country music is a distinctively American form of popular music based on traditional, southern, Anglo-American folk music and influenced to some extent by the blues. North Carolinians played a significant role in the development of this music, particularly in the 1930s, and its popularity has continued in the state. Dozens of the state's radio stations feature country music programming, and concerts featuring both local and national acts frequent North Carolina venues throughout the year. Modern-day country stars George Hamilton IV and Randy Travis are both from North Carolina.

The traditional Anglo-American music of North Carolina at the turn of the century encompassed a cappella ballad singing, fiddle and banjo duos, and sacred music. Settlers from the British Isles brought with them ballads of love and death as well as a style of fiddle music played for dances that combined a fast tempo, complex melodies, and a steady rhythm. By the middle of the nineteenth century, African American banjo players from the Piedmont began to teach white musicians how to play, and banjo-fiddle duos, the core of the later string band, appeared among both African Americans and whites. A strong folk hymn tradition also existed among various denominations in North Carolina, especially Baptists. In the early nineteenth century, the shape-note singing movement introduced harmony singing to churches across America. At the start of the twentieth century, blues music took form among the state's African American musicians. The pieces were in place for the development of a new musical style.

Country music in the early days centered around solo vocalists backed by guitar and string bands. The string band, usually a fiddle and banjo with rhythm guitar, was an ensemble rooted in folk tradition, and in the 1920s audiences came to appreciate the music through the new media of radio, records, and concerts. The textile mills of the Southeast played an important role in the history of early country music, providing a meeting place and a supply of steady work for musicians in between musical gigs. The most influential string band to arise from North Carolina's mill communities was Charlie Poole and his North Carolina Ramblers. The Ramblers' tightly arranged sound set them apart from other string bands of the day and had a strong influence on later musicians, particularly in bluegrass.

Several radio stations in North Carolina played country music, but none was more influential than WBT in Charlotte. Founded in 1922, the station played classical and "high culture" music for several years, but by 1929 it was featuring country music as part of its programming. In 1934 the Crazy Water Crystals Company, a laxative manufacturer, sponsored a Saturday night show called the Crazy Barn Dance, similar in format to Nashville's well-known Grand Ole Opry. Another popular country music show on WBT was Briarhopper Time, named for the band the Briarhoppers. In the late 1940s, the Briarhoppers, featuring Roy "Whitey" Grant and "Arval" Hogan, was one of the most well-known radio bands. One of their most popular songs was a version of "Jesse James," which they recorded in 1949 with a small recording company out of Pennsylvania called Cowboy Records.

The WBT programs also attracted a number of other country bands and performers, including Fisher Hendley and his Carolina Tarheels, Claude Casey, Homer "Pappy" Sherrill and DeWitt "Snuffy" Jenkins, and Mainer's Crazy Mountaineers, featuring brothers J. E. and Wade Mainer of Concord. Raised in Weaverville in Buncombe County, the Mainer brothers worked in the cotton mills until 1932, when J. E. started playing fiddle on a radio station in Gastonia. Perhaps the most influential old-time string band of the 1930s, Mainer's Crazy Mountaineers took their name from their first sponsor, the Crazy Water Crystals Company. The group recorded old-time fiddle tunes, such as "Johnson's Old Grey Mule," for Bluebird Records beginning in 1935. The band influenced the singing and playing of other musicians, particularly Clyde Moody, known as the "Carolina Wood-chopper." Wiley and Zeke Morris, members at one time of the Crazy Mountaineers, introduced "Salty Dog Blues," one of the most popular songs in a style that would later be known as bluegrass.

Other popular brother duets emerged in the country music scene. Although born in South Carolina, Dorsey and Howard Dixon eventually settled in East Rockingham, N.C., and began playing publicly in 1932. By 1934 the Dixon Brothers appeared on WBT as part of the Crazy Water Crystals Saturday Night Jamboree. With Dorsey playing guitar and Howard on dobro, the pair recorded more than 60 songs for record companies in the 1930s. Dorsey was an accomplished songwriter and the author of the classic "Wreck on the Highway." The brothers' lifelong work in cotton mills inspired mill songs such as "Weave Room Blues," an important part of their repertoire. Howard died in 1961, while Dorsey came back into national prominence during the folk revival of the early 1960s before dying in 1965.

Deriving their moniker from the fact that North Carolina's Blue Ridge Mountains are sometimes referred to as the Land of the Sky, the Blue Sky Boys (Bill and Earl Bolick) launched their successful musical careers in 1935 at WWNC in Asheville and earned great popularity during the 1930s and 1940s. Influenced by Kentucky's Monroe Brothers, the Blue Sky Boys featured Earl singing lead and playing guitar and Bill singing tenor and playing mandolin. Their music influenced many traditional country music duos, particularly the Louvin Brothers, Jim and Jesse McReynolds, Carter and Ralph Stanley, and the Everly Brothers. The band recorded some of their most popular songs on 16 June 1936 in an RCA Victor recording studio in Charlotte for the Bluebird label. Songs coming from that session included "I'm Just Here to Get My Baby Out of Jail," "Sunny Side of Life," "Down on the Banks of the Ohio," and "Where the Soul Never Dies."

Not only was country music played and broadcast in North Carolina, but after the mid-1930s, much of it was recorded in the state as well. RCA Victor made the first country recordings in Charlotte in 1927. The onset of the Great Depression diminished record sales nationwide and recording decreased. In 1936, however, RCA began making records in Charlotte, eventually turning the top three floors of the Hotel Charlotte into a recording studio. Many WBT acts recorded there, including Mainer's Crazy Mountaineers and the Monroe Brothers. By the 1940s, the golden age of country music recording in Charlotte was over, although a few companies made brief stops during this decade. Guitarist Arthur Smith opened a recording studio in Charlotte in 1959, and in 1977 he cofounded CMH Records, a leading bluegrass record label. Sugar Hill Records, founded in 1978 by Barry Poss and located in Durham, occupies a strong independent niche in country, bluegrass, and other traditional roots genres. Sugar Hill artists, who in 2005 included Dolly Parton, Willie Nelson, and Ricky Skaggs, have won ten Grammy Awards and maintain a stature in the country music scene that is rare outside of Nashville.