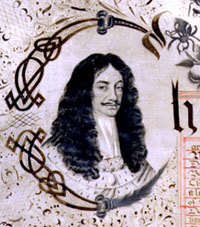 In 1663 Charles II, king of England, granted a large swath of land, part of which would become the state of North Carolina, to eight noblemen who had helped him regain the throne. (The area's name, "Carolina," came from the Latin version of "Charles.") The men, who became Lords Proprietors, received "true and absoelute" rule over the "Province of Carolina," which reached from the southern boundary of Virginia to the northern boundary of the Spanish colony of Florida and westward to the South Seas.

Because the Proprietors ruled from their homes in England, they were often out of touch with the lives of the colonists. They tried, mostly unsuccessfully, to run the colony as a profitable business. While they did their best to encourage settlement, for many years Carolina was a rather unsavory place. Epidemics, hurricanes, droughts, crop failures, political turmoil, religious dissension, and conflicts with Indians all added to the challenge of settling in a new land.

By 1729 most of the Proprietors were tired of dealing with their colony, and all but one had sold their shares back to the king of England. North Carolina became a royal colony until the American Revolution. During this royal period, conditions stabilized, and more settlers arrived. North Carolina's population increased from around 30,000 in 1730 to more than 265,000 in 1775. Settlement patterns shifted westward from the Coastal Plain toward the Piedmont and foothills. Thousands of incoming families traveled down the Great Wagon Road from Pennsylvania and other northern colonies, while many other new immigrants arrived from Europe.

As settlers colonized North Carolina, they gave new names to the places they encountered. Sometimes colonists retained Indian place-names or created Anglicized versions of Indian words. The names of local tribes were also used. Chowan County, Currituck County, Pasquotank County, and Perquimans County were all formed in 1672 and named after tribes who had lived in the northeastern portion of the colony.

Some colonial areas were named after local geographic features. Other places were called by the last names of their earliest settlers. A few North Carolina towns were even named after cities in Europe. Salisbury, in present-day Rowan County, took its name from Salisbury, England, while the Swiss Baron Christoph von Graffenried named New Bern, in present-day Craven County, in remembrance of Bern, the capital of his homeland. Perhaps the most popular way to name towns and counties, however, was to choose the name of a well-known person associated with the colony. For example, all eight of the original Lords Proprietors had districts, counties, or towns named for them. 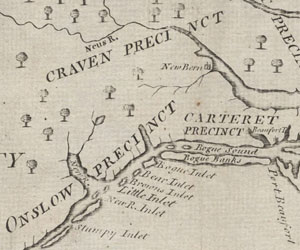 The northeastern part of North Carolina, where European settlement initially began, was known as "The Albemarle," or Albemarle County, after George Monck, the Duke of Albemarle. The influence of this Proprietor was felt for many years, as the citizens of Albemarle, in present-day Stanly County, named their town after him in 1841.

Craven County was named for William Craven, Earl of Craven, while Sir George Carteret gave his name to Carteret Precinct, which existed between 1671 and 1684, as well as to Carteret County, founded in 1722. Shaftesbury Precinct (1671–1684), which later became Chowan County, was named for Anthony Ashley Cooper, Earl of Shaftesbury.

John Berkeley, Baron Berkeley of Stratton, and his brother, Sir William Berkeley, both had areas named after them—the Berkeley Precinct (1671–1684), which became Perquimans County, and Berkeley County, an area that lies in present-day South Carolina.

As the original Proprietors died or sold their shares, new men took their positions and also lent their names to North Carolina places. From 1705 until 1712, the area that became Craven County was known as the Archdale Precinct, after John Archdale, who served briefly as governor and was one of the few Proprietors to ever visit the colony. The communities of Archdale in present-day Cleveland and Randolph counties were also named in his honor. In addition, for a short period, the area that became Hyde County was known as Wickham Precinct, for Archdale's home in England—Temple Wycombe.

In 1712 the Pamptecough Precinct (present-day Beaufort County) was renamed in honor of Henry Somerset, Duke of Beaufort, who had inherited the Duke of Albemarle's original share of the colony. The town of Beaufort, in present-day Carteret County, was also named for Somerset. Bertie County was named for brothers James and Henry Bertie, who received portions of the shares initially owned by the Earl of Clarendon and Sir William Berkeley. Granville County, created in 1746, was named for John Carteret, Earl Granville, son of original Proprietor Sir George Carteret. Tyrrell County, founded in 1729, was named for Sir John Tyrrell, who in 1725 acquired the share originally owned by the Earl of Shaftesbury. 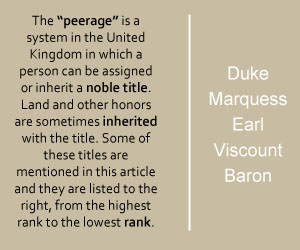 Several North Carolina counties and towns were named for the colony's early governors. In 1712 Hyde County was named in honor of Edward Hyde, who served as governor from 1711 to 1712 and was a relative of original Proprietor Edward Hyde, Earl of Clarendon. The town of Edenton, in present-day Chowan County, was initially called Queen Anne's Creek but was renamed in 1722 in memory of Governor Charles Eden, who held office from 1714 to 1722.

Johnston County, created in 1746, was named for the colony's longest-serving governor, Gabriel Johnston, who governed from 1734 to 1752. Rowan County's name honored Matthew Rowan, the colony's acting governor from 1753 to 1754. Martin County was named for Governor Josiah Martin in 1774, just one year before he fled the colony prior to the Revolutionary War. Wake County was named not for a governor but for his spouse. Margaret Wake Tryon was the wife of William Tryon, who governed from 1765 to 1771 and who built the governor's residence in New Bern that became "Tryon's Palace."

Some North Carolina place-names were associated with royalty. Orange County was named after William III, king of England from 1688 to 1702, who was also called the Prince of Orange. The town of Brunswick, in present-day Brunswick County, honored King George I, a native of Brunswick, Germany. New Hanover County also owes its name to George I's family, known as the House of Hanover. Cumberland County was named for William Augustus, Duke of Cumberland, son of King George II. Charlotte and Mecklenburg County both honored Queen Charlotte, of Mecklenburg-Strelitz, wife of King George III. Kinston, in present-day Lenoir County, is a shortened version of the town's original name, Kingston, which was given to honor King George III.

Other Noblemen or Government Officials

Still other places were named after British noblemen or government officials. Halifax County was named for George Montagu, Earl of Halifax. Wilmington, in present-day New Hanover County, was named for Spencer Compton, Earl of Wilmington, while Northampton County honored his father, James Compton, Earl of Northampton. Both Edgecombe and Guilford counties were named for men who held the post of lord of the British treasury, while Onslow County was named after the Speaker of the British House of Commons. Three places—Chatham County, Pitt County, and Pittsboro—were named to honor William Pitt, Earl of Chatham, an English statesman who defended the rights of the American colonies in Parliament.

A few colonial place-names had other origins. In 1764 the town known as Old Fords of the Tar in present-day Franklin County was renamed Louisburg, to honor the capture of the French fortress of Louisburg, Nova Scotia, during the Seven Years' War. Two years later, Moravian settlers in present-day Forsyth County took a different approach when they named their town Salem, after the Hebrew word for "peace."

Horne, Robert. 1666. A Brief Description of the Province of Carolina... (London, 1666). A transcription, with notes, can be found on ANCHOR: https://www.ncpedia.org/anchor/brief-description-province

Resources on the Lords Proprietors in libraries [via WorldCat]