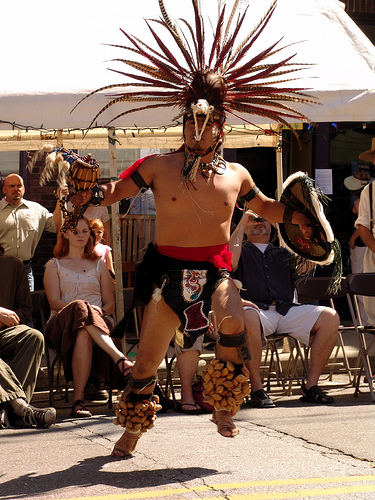 North Carolina's increasing ethnic and cultural diversity has spawned numerous festivals to promote understanding and community among peoples. Many festivals are held by Native American groups to highlight both traditional and contemporary expressions of Indian culture, including music, drumming, food, and crafts. Since 1996, the Occaneechi-Saponi Cultural Festival has been held annually on the banks of the Eno River in Orange County. It features handmade tribal crafts, dancing, food, and music to raise money and awareness for the preservation of Native American history. Festivals and powwows are also sponsored by the Cherokee, Waccamaw-Siouan, Meherrin, Lumbee, and other tribes in the state. For nine days annually in late June and early July, the Lumbee celebrates Lumbee Homecoming with pageants, sports, gospel singing, an elder's dinner, art shows, and other events. While rooted in a celebration of kinship and community ties, it has also become an opportunity to showcase the causes of tribal recognition and Native American sovereignty.

Across the United States, the expanding Latino population is integrating its culture with the American mainstream. Founded in 1994 and boasting an attendance of more than 60,000 in 2006, La Fiesta del Pueblo in Raleigh is billed as the largest Latin American cultural festival in the Carolinas. The two-day event in September presents not only traditional food, music, soccer tournaments, and artwork but also informational exhibits promoting health, housing, employment, and political concerns of the Latino community. Charlotte's Carnaval Carolina, founded in 1998, is another rapidly growing entertainment festival featuring Latino and Caribbean artists.

Perhaps the largest single festival day statewide remains the Fourth of July, when North Carolinians join their counterparts nationally in celebrating the birthday of the United States. One of the largest, Greensboro's Fun Fourth Festival, draws well over 100,000 people annually and provides a major economic boost to Guilford County. The summer months also bring somewhat curious celebrations of the Christmas holiday in several locations around the state; Statesville and Jefferson are among the cities and towns hosting "Christmas in July" celebrations.