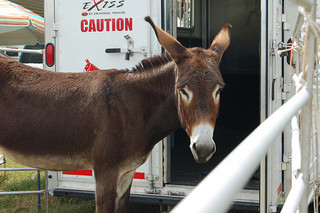 Mule Day is an annual celebration drawing tens of thousands of visitors to the small Johnston County town of Benson. Held in late September, the event was started in 1949 by Nowell Smith Jr., with the assistance of local livestock dealer Willis McLamb and a group of merchants, to recognize farmers and the area's major draft animal, the mule-the sterile offspring of a male donkey and a female horse. The first celebration featured more than 300 mules, and every float was pulled by the ornery beasts. Over the years this annual "exercise in nostalgia" has grown larger, while the number of mules participating has shrunk: despite the name of the celebration, the number of horses involved has often surpassed the number of mules.

It was fitting that Benson should be the site for an extravaganza recognizing the mule, since the town was once the location of a thriving mule trade-so much so that if one said he was from Benson the response would inevitably be, "You're from mule town." One publication on the annual celebration reminded visitors that the mule was a noble animal, and "that a relative of his mother is cheered to victory each year at the Kentucky Derby, and that a kinsman of his father walked through Jerusalem on Sunday 2,000 years ago, with palms beneath his feet."

The three to four days of festivities include swine judging, hog calling, a parade, a concert, beauty contests, political speeches, a street dance, a rodeo, a fiddler's convention, and fireworks. There are also a variety of mule-judging events, including awards for racing, pulling, youngest, oldest, ugliest, and largest. These culminate in the selection of a "grand champion mule." With recent social changes in the area have come added events, such as the Mule Day "Tee Off" golf tournament at Reedy Creek, arts and crafts shows, barbecues, and children's rides.

Spencer Carter, "Stepping out in Muletown," The State (August 1975).