Festival for the Eno 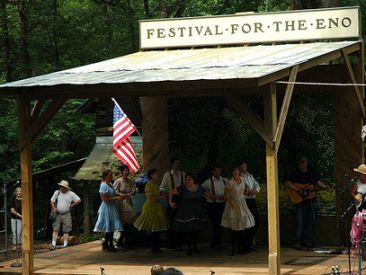 The Festival for the Eno, a multiple-day event held annually in northern Durham since 1980 and sponsored by the Eno River Association with the help of local establishments, is considered to be one of the premier folk and arts festivals in North Carolina and the Southeast. The festival is dedicated to conserving and protecting the natural environment, culture, and history of the Eno River basin, with proceeds supporting the association's work in the upkeep of the river and the purchase of land within its watershed. The first festival, a single-day event, was staged on 4 July 1980 by Margaret C. Nygard and a core of 100 volunteers. It featured two stages for performances as well as multiple arts displays, crafts booths, and food stands. The festival drew almost 12,000 people, a number that would steadily rise through the 1980s and 1990s (despite being hindered in some years by record high temperatures and other natural forces, such as a major flood in 1995).

In 1998 the Festival for the Eno first broke the 40,000 attendance mark, bringing more than $100,000 to the Eno River Association. The festival, which continues to be centered around Independence Day, has drawn hundreds of thousands of visitors through the years and, along with numerous local artists and craftsmen, such performers as Doc Watson, Emmylou Harris, and Etta Baker.

Festival for the Eno: http://enoriver.org/Festival/