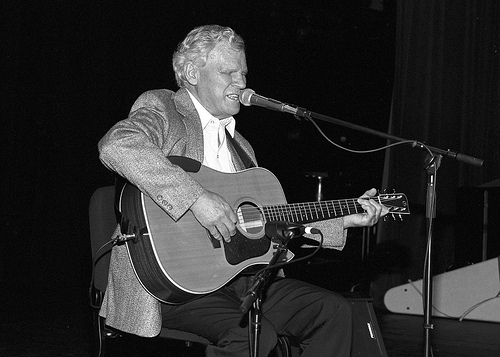 In 1923 Arthel “Doc” Watson was born in the Mountain region of northwest North Carolina in a Watauga County community called Deep Gap. An eye infection caused him to lose all of his vision before he turned a year old. Despite being blind, he remained an active child—climbing cherry trees, playing games with his eight brothers and sisters, and helping with household chores. When Watson was fourteen years old, his father put him to work on one end of a cross-cut saw, cutting timber. “It taught me that I didn’t have to sit in the corner as a handicap person, that I could work,” he later said.

Watson’s loss of vision made listening especially important, and there were lots of exciting sounds around his house and community. Doc’s father, General Watson, played harmonica and banjo and led singing in the family’s church. General gave his son his first harmonica when he was five. Around that time, the Watsons got a Victrola phonograph, (or record player), and a box of records. Doc was very excited and spent hours listening to blues guitar players, old-time fiddlers, and yodeling cowboy singers.

When Watson was eleven years old, his father made him a fretless, mountain-style banjo—a banjo without the metal bars or ridges found on the fingerboard of many stringed instruments—and taught him a few traditional folk songs well known in the region. One of those songs, “Ruben’s Train,” imitates the sounds of a train on the banjo. Doc Watson kept playing the banjo, but another instrument fascinated him: the guitar.

One morning, Watson was playing around with a guitar that his brother had borrowed from a relative. His father told him that he would help him buy a guitar, if Doc could play a song by the time he got home from work. General didn’t know that Doc already knew a few chords. When his father returned from work, Doc played “When the Roses Bloom in Dixieland.” He got his first guitar—and he has been picking one ever since. 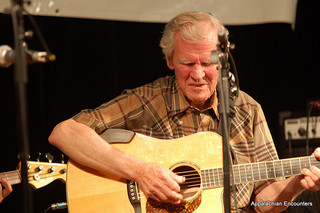 Watson attended a school for the blind in Raleigh for a few years, but his favorite place to be was back home in Watauga County. At home he could play with his brother David, listen to records and to relatives playing music, and work for money. He cut timber to pay for a new guitar, and he spent many hours practicing on it.

As he got older, Watson used his good ears and musical ability to make money. He worked for a while as a piano tuner. And sometimes he would walk or catch a ride several miles into Boone to play on the streets there for spare change. People heard Watson playing on the streets and invited him to play on local radio stations. During one of those performances, when he was eighteen, the announcer asked him for a nickname. It was common for performers to use a “stage name” on the radio. A girl in the audience yelled, “Call him Doc” (likely a reference to fictional detective Sherlock Holmes’s sidekick, Doctor Watson). The nickname stuck.

Doc’s cousin, Willard Watson, played the banjo and sometimes had music parties. Doc met fiddler Gaither Carlton at one of these gatherings, and the two began to play music together. Doc fell in love with Gaither’s daughter, Rosa Lee. The two got married and later had two children: a son, Eddy Merle, and a daughter, Nancy Ellen.

In order to help make a living, Watson started playing a regular gig (or paid performance) with a square dance band at the American Legion club in Boone. The square dancers preferred to dance to fiddle tunes, but the band did not always have a fiddler. Watson had to learn how to play fiddle tunes on his guitar. Because other guitar players were not playing fiddle tune melodies, he used creativity and invented his own way to play them. He spent hours practicing, learning to play the melodies by using a flat pick going up and down on the guitar strings. He got very good and could play lots of notes, fast and clean.

Watson sometimes performed with a group of musicians from nearby Mountain City, Tennessee, including a banjo player named Tom “Clarence” Ashley. In the 1960s many college students became very interested in folk music. They would travel to rural areas across the country to find traditional musicians to listen to and learn from. One student of music, Ralph Rinzler, came to find Ashley and ended up meeting Watson, whose amazing guitar and banjo playing impressed him. Rinzler knew that young people in college towns and cities would love the traditional mountain songs and tunes that Watson and the other musicians knew. Rinzler recorded some songs and spread the word.

Soon, Watson was traveling all over the country performing for enthusiastic audiences. He would sing touching ballads about mountain tragedies, finger-pick some soulful blues, then dazzle audiences with his fast flat-pick style. People loved the traditional songs and heartfelt blues, but there was something extra special about Watson’s flat-picking. He could play fiddle tunes on the guitar faster and more precisely than most people had ever heard. All of his practicing paid off. Watson could make a living for his family playing music full-time, although it required lots of time out on the road.

While Doc was away from home performing in the early 1960s, Rosa Lee taught their son, Merle, how to play the guitar. (Many of Doc’s family members are good musicians, too.) Merle, then a young teenager, had a natural talent and was a quick learner. Within a few months, he was on the road traveling and performing with his father. For twenty years, Doc and Merle traveled across the United States performing, and they made many albums together. (Listen to an excerpt of Doc Watson singing and playing "Walk on Boy" with Merle. [From Digital Library of Appalachia. Full recording owned by Blue Ridge Institute of Ferrum College].)

In 1985 Merle died tragically in a tractor accident. Since 1988, an annual music festival—called MerleFest—has been held in his memory at Wilkesboro Community College. Today, more than fifty thousand people attend this event, which lasts four days in April. It includes Doc as well as hundreds of other performers of many musical styles.

Despite his son’s death, Doc Watson has continued to perform and record. He has won several Grammy Awards, including the Lifetime Achievement Award. He has received the National Heritage Fellowship from the National Endowment for the Arts, the highest national honor for a traditional artist, as well as other awards. In order to acknowledge the traditions of Watson’s influential musical family, for example, the North Carolina Arts Council honored the entire family with its 1994 Heritage Award.

Though he is now world famous for his incredible guitar playing, Watson remains a very humble person. He still lives in Deep Gap with Rosa Lee, after more than sixty years of marriage. Of course, he continues to make music, helping carry on the traditional tunes and songs of the mountains and inventing new styles and techniques for the next generations.

Mark Freed works as a folklorist and with traditional arts programs in Watauga County, where he lives with his wife, daughter, and a dozen banjos.

Doc Watson passed away at the age of 89 on May 29, 2012 at Baptist Hospital in Winston-Salem, North Carolina.