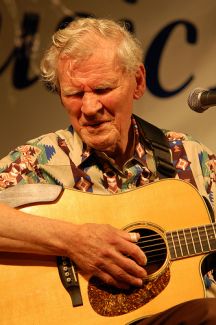 North Carolina boasts a strong tradition of folk music dating from the beginnings of settlement to the present day. Folk songs are transmitted primarily through oral and informal means among singers of a given community, with each singer often putting his or her own stamp on the material so that one song usually exists in a number of variant forms. The English scholar and folklorist Cecil Sharp defined a folk song as having been "created by the common people" rather than by the "educated." Sharp theorized an evolution of folk music turning on three factors: continuity, variation, and selection.

Folk songs address every aspect of life. Many ponder personal relationships or express an individual's emotions. Songs of courtship and love as well as the blues fall into this category. Other folk songs convey an individual's relationship with the community and perhaps remark on work or local features, places, or figures. Folk songs also include topics of national significance. In North Carolina, major political and military conflicts such as the Regulator Movement, Revolutionary War, and Civil War inspired folk songs that circulated until at least the beginning of the twentieth century.

Not all folk songs look outward to the world of human endeavors and relationships, however. Many religious songs and hymns are folk songs. In addition, many folk songs are functional in nature, their music and words used for practical purposes. Tunes played for dancing often have many accompanying verses. If instruments are scarce, these tunes can be used alone for dancing. Likewise, some songs, known as "play-party" songs, are associated with particular games, and most lullabies circulate as folk songs. Work songs pace manual labor or pass the time during repetitious tasks. Scholars often consider hollers, wordless but usually tuneful shouts used to communicate across great distances, and auctioneer's chants as quasi-folk songs.

To Whom It May Concern;

To Whom It May Concern;

My name is Daniel MacIsaac and I'm from Nova Scotia Canada. As a child, I grew up listening to my father playing songs from Bob Dylan, Luke Kelly, Clancy Brothers, songs written by Kavanaugh and so forth on the old record player.
Recently, I've been intrigued by this music again during these hard times and noticed the similarities in music (old poetry,songs) and influences that coincide with these musicians.

I remember watching a documantory on Bob Dylan (crave TV) and it was noted that some influences were Guthrow and "carolina music." I distinctly remember listening to an old tunes from this era which had remarkable similarity to an old celtic tune.

Boy, I would be some happy to find this tune again or some references to these songs.
I love this music.

Thank you for you time