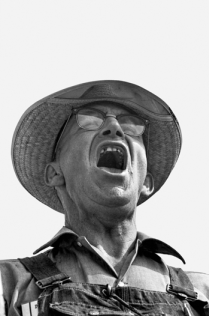 The Hollerin' Contest, an annual fair established in Spivey's Corner in 1969, celebrates the art of hollering, which, before the telephone, was an essential means of communicating for people in the rural areas of North Carolina. People used a repertoire of hollers to communicate with each other over long distances, from simple "good mornings" to messages alerting neighbors of an ongoing or impending emergency. This essential part of the rural culture of farm families of North Carolina eventually was obscured by the communication technologies of the twentieth century.

The idea for the Hollerin' Contest, which regularly attracts 2,000 to 3,000 people to Spivey's Corner every June, was first discussed on a local radio talk show; organization for the contest began shortly thereafter. The efforts of the local community were rewarded, as the contest drew national attention in its first year. North Carolinian and CBS reporter Charles Kuralt and reporters from Time magazine, the Associated Press, and United Press International wrote about the event. The first Hollerin' Contest winner, 70-year-old Dewey Jackson, hollered a rendition of "What a Friend We Have in Jesus." He was sent a letter of congratulations from President Richard Nixon and also appeared on NBC's Tonight Show.

The main goal of the Spivey's Corner Hollerin' Contest continues to be keeping the art of hollering alive in the state and raising funds for the Spivey's Corner Volunteer Fire Department. Since the first contest in 1969, the event has grown into a full day of family-oriented events, including a 10-K Hollerin' Run, a craft show, music, and dancing. The contests are often judged by invited guests, who have included a North Carolina agriculture commissioner, a North Carolina secretary of state, and U.S. congressmen.

In June 2016, the Spivey's Corner Volunteer Fire Department (organizers of the annual Hollerin' Contest) announced that the contest would cease due to difficulties keeping up with modern tastes and sustaining public interest in the tradition of hollerin'. In response to the termination of the annual contest at Spivey's Corner, former contest champions Iris Turner and Robby Goodman organized the first "World Wide Hollerin' Festival." The new contest intends to broaden its cultural reach by including hollering from other countries and traditions, including Germany, Switzerland, and American Indian hollering. The contest was held on November 5, 2016 in Hope Mills, N.C.

The Hollerin' Contest at Spivey's Corner from Brian Gersten on Vimeo.

H. H. Oliver of Goldsboro delivers his prize-winning holler at the second annual Hollerin' Contest at Spivey's Corner on 20 June 1970. Courtesy of North Carolina Office of Archives and History, Raleigh.