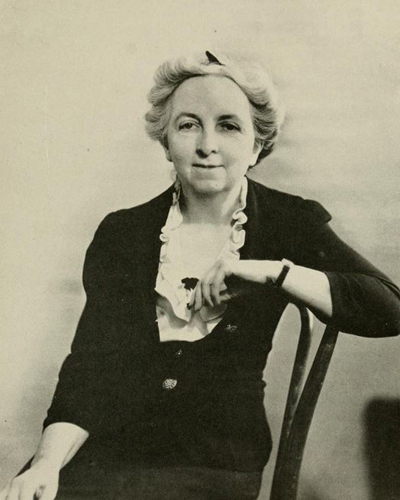 Lillian Frances Parker Wallace, educator, historian, author, lecturer, antiquarian, musician, watercolorist, and linguist, was born in Pine City, Minn., the daughter of Saidie Althea Feetham and the Reverend George Selby Parker (13 Apr. 1857–1 Sept. 1926). The Feethams were Canadian, with English forebears; the Parkers originated in Ireland. Mrs. Parker was a teacher and her husband, a Methodist minister. Lillian Parker Wallace had one brother, Selby Carlyle Parker, an investment banker who lived most of his life in Buffalo, N.Y.

She was educated in the public schools of Minnesota and Colorado, where her father's church assignments took the family. After graduation from the Leadville, Colo., high school, she earned an A.B. degree in languages in 1910 from the University of Denver, where she was an assistant as an undergraduate and where she taught for several years. Relocating in North Carolina, she took summer courses at Wake Forest College and The University of North Carolina; in 1929 she received an M.S. degree in education from North Carolina State College at Raleigh. She received a Ph.D. degree in history from Duke University in 1944, when she was elected to Phi Beta Kappa.

After teaching Latin at the Bainbridge, Ga., high school from 1919 to 1921, Mrs. Wallace moved to Raleigh, where she became an instructor in history and education at Meredith College. Advancing to the rank of professor, she devoted full time after 1944 to the history department. She was acting head from 1946 to 1948 and then department chairman until her retirement in 1962, when she was named professor emerita. During the summers she taught at Wake Forest and North Carolina State.

In 1948 her department and the North Carolina Department of Archives and History introduced the first undergraduate course in the nation to offer museum and archival training. She and Director Christopher Crittenden jointly supervised the students, who became junior archivists. The program received special commendation from the American Association for State and Local History.

Dr. Wallace became a patron and life member of the Japan Society, in which she held a fellowship as a Scholar in 1958. In 1960–61 she won a Southern Fellowships Fund grant to complete a book published in 1966. Beginning in 1958 she was a consultant and lecturer for North Carolina's televised in-school classes on American and world history and a panel member on world affairs for other WUNC-TV programs. She was a frequent lecturer and panelist on international affairs before professional organizations, other colleges, and civic groups, including the American and Southern Historical Associations, Raleigh's Institute of Religion, the Sir Walter Cabinet, and other groups. She was a member of the North Carolina Literary and Historical Association (executive committee), Trinity College Historical Society, Southern and American Historical Associations, American Association of University Professors (president, Meredith College chapter, and executive committee member, North Carolina division), American Academy of Political and Social Science, Asian Society, Societies for French and Italian Historical Studies, Conference on British Historical Studies, American Institute of Archaeology (life member), Southern Baptist Historical Society, and American Association of University Women.

In 1964 an honorary doctorate awarded by North Carolina State College cited her significant contributions to the development of education at all levels throughout North Carolina and the region, recognized her as an accomplished linguist, and noted her extensive accomplishments as a professional pianist and organist. The 1946 Meredith College annual Oak Leaves was dedicated to "Dr. Lillian Parker Wallace, whose friendly smile and kindly heart is an encouragement to all, whose genuine interest and enthusiasm, an inspiration, and whose willing cooperation and versatile talents, an incentive to greater accomplishments."

Dr. Wallace combined a musical career with teaching, having become an able pianist and organist largely through self-instruction. In the 1920s she played organ accompaniment for traveling plays and silent movies in local theaters. She was a member of the Bessie Rae McMillan orchestra, a quintet that played nightly during the dinner hour at the Hotel Sir Walter in Raleigh; played piano with the WPTF radio orchestra and ensembles; and performed for events at the Executive Mansion. In the 1930s she was pianist and choir director at Pullen Memorial Baptist Church, Raleigh, and later was organist and choir director at Hillyer Memorial Christian Church, also in Raleigh. For over thirty years she was accompanist for the North Carolina State College Glee Club and quartet and accompanied the college orchestra's public concerts. A life member of Local 500 of the American Federation of Musicians, she was its president for some years as well as dean of the Central North Carolina Chapter of the American Guild of Organists. With Dr. Harry E. Cooper, she founded the Raleigh Chamber Music Guild in 1941, serving as director and later as vice-president. Also with Dr. Cooper in 1942 she helped organize the Raleigh Oratorio Society and was long its accompanist and assistant director. For nearly thirty years she was a member of the Saint Cecelia Choral Club, first as a singer and then as a pianist. For many years she was director and vice-president of the Raleigh Civic Music Association and a member and patroness of Sigma Alpha Iota, the national music sorority. With other officers of the North Carolina Literary and Historical Association, she helped initiate Music Day of Culture Week on 3 Dec. 1957. In 1969 the North Carolina Federation of Music Clubs presented her an award of merit "for distinguished service to the cultural, musical, and artistic life of the State."

A talented watercolorist, Dr. Wallace annually exhibited her paintings as well as drawings, cartoons, and calligraphy in the Meredith College art gallery, beginning in 1947, and in other years in the Raleigh Woman's Club Sidewalk Art Show. Many of her watercolors depicted local scenes; others were executed during summer vacations at Lake Chatauqua, where she joined artists from the Lake Chatauqua Artists' Colony in afternoon painting groups. Her works are owned by a number of personal friends and collectors in the Raleigh area, as well as by Meredith College.

At Meredith, Dr. Wallace created the role of the White Rabbit in the faculty's quadrennial presentation of "Alice in Wonderland," playing that part in all twelve productions between 1924 and her death (even after her retirement). In sports, she was an expert marksman, an archer, a bowler, and an avid tennis player. Long after her health forced her off the courts about 1953, she retained her membership in the Raleigh Tennis Club and the National Tennis Foundation. She was also a skilled chess and scrabble player.

Dr. Wallace collaborated with Dr. Alice Barnwell Keith of the Meredith history faculty in writing A Syllabus of the History of Civilization, which they revised ten times between 1933 and 1962 for use by their students. She was the author of The Papacy and European Diplomacy, 1869–1878 (1948), Leo XIII and the Rise of Socialism (1966), and "Bismarck and Decazes: The War Scare of 1875," South Atlantic Quarterly (Spring 1958). She was coeditor with William C. Askew of Power, Public Opinion, and Diplomacy: Essays in Honor of Eben Malcolm Carroll, by His Former Students (1959), to which she also contributed a chapter. The volume was one of the twenty-two winners of the eighth annual Southern Books Competition in 1959. Unpublished at the time of her death were two other manuscripts of history, "The Vatican and the Rise of Mussolini" and "The Vatican and European Diplomacy before World War I." She also was coauthor with a former student, Rachel Rawls, of an unpublished historical novel set in the fifteenth century.

In political preference she was a Democrat. A Baptist, she was a member during all her years in Raleigh of the Pullen Memorial Baptist Church, where in addition to her musical role she was an adult leader in the young people's organization.

Mrs. Wallace's marriage on 12 June 1911 to William Harvey Wallace ended in separation. A son, Wesley Herndon Wallace (b. 18 Apr. 1912), became a radio announcer, general manager of the Manila (Philippines) Broadcasting Company, and professor in the Department of Radio, Television and Motion Pictures Department of The University of North Carolina, where he was chairman from 1962 to 1977. A daughter, Marian Frances Wallace (b. 18 Sept. 1916), married Preston W. Smith and was for some years head of the immunology laboratory at Duke Hospital, Durham.

On 14 May 1971, sixteen days before Dr. Wallace's death, the Meredith College class of 1971 announced that it was establishing the Lillian Parker Wallace Fund to finance visiting lecturers and eventually a visiting professorship. By commencement it had given or obtained gifts totaling $7,000, with plans for enlarging the fund annually. The first Lillian Parker Wallace Lecture, presented in the college auditorium on 18 Sept. 1978, featured the Right Honourable Sir Harold Wilson, former prime minister of Great Britain.

Dr. Wallace's died after a short confinement at Rex Hospital in Raleigh. She was buried in Oakwood Cemetery.