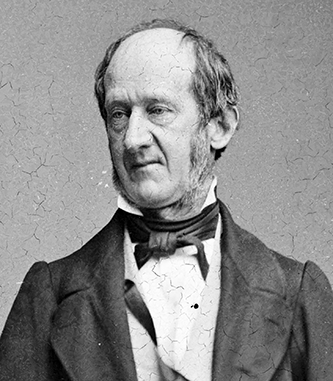 Edward Stanly, congressman and Union military governor of North Carolina, was born in New Bern, the son of Elizabeth Franks, of Jones County, and John Stanly. His father was twice elected to Congress as a Federalist, was frequently a borough representative to the North Carolina House of Commons, and served as speaker. Edward Stanly attended the New Bern Academy and at sixteen was sent to The University of North Carolina, but his father's illness interrupted his studies after one term. In May 1827 he enrolled in the American Literary, Scientific, and Military Academy, then at Middletown, Conn. Graduating in 1829, he studied law, was admitted to the North Carolina bar in 1832, and began a practice in Washington, N.C.

In 1837 Stanly was elected to Congress as a Whig after two older men had declined the nomination. His irritable temper and sarcastic tongue soon made him a well-known Whig partisan; John Quincy Adams called him "the terror of the Lucifer [Democratic] party." Twice reelected to Congress, he engaged in several personal encounters on the floor of the House and narrowly avoided a duel with Henry A. Wise of Virginia in 1842. In 1851 he fought a bloodless duel with Samuel W. Inge of Alabama. Defeated for reelection in 1843, in part because of his vote for the Whig tariff of 1842, he was prominently mentioned for the Whig gubernatorial nomination in 1844. However, it was said that he was "too young, rash and indiscreet," and the nomination went to William A. Graham. Stanly was elected to the House of Commons from Beaufort County in 1844 and reelected in 1846. At both sessions he was speaker and won the respect of the Democrats by his impartial conduct in the chair. In 1847 the legislature elected him attorney general of the state, but he resigned the following year and returned to the House of Commons. He was again passed over by the Whigs for governor in 1848, when Charles Manly won the nomination.

Narrowly elected to the House of Representatives in 1849, Stanly was one of the few southern Whigs to follow President Zachary Taylor's lead during the congressional debates over the Compromise of 1850. After Taylor's death in July 1850, Stanly cordially supported the compromise measures. In 1851 he stumped his district denouncing the secession doctrine and was reelected by an increased majority. He exerted influence with northern Whigs in Congress because of his strong Unionism and devotion to the Whig party.

The election of 1852 sounded the death knell of the Whigs in North Carolina, and Stanly did not seek reelection the following year. Instead, he moved to California and established a successful law practice in San Francisco. He was an active layman in the Episcopal church. In 1857 he accepted the Republican nomination for governor of California, although he had not joined the party and disagreed with its position on slavery in the territories. He was heavily defeated by the Democratic candidate, John Weller.

Stanly opposed the Secessionists in California in 1861 and spoke out eloquently on behalf of the Union. Convinced in his own mind that North Carolina had been tricked into secession, he offered to return to the state as a peace emissary. President Abraham Lincoln responded by appointing him military governor of North Carolina with the duty of promoting Unionist sentiment in the state. Soon after his arrival in New Bern on 26 May 1862, he learned that he faced an impossible task. Shut up within the Union lines, he could get no hearing from those who regarded him as a traitor and renegade to his native state, while his refusal to countenance Negro schools at New Bern aroused the antagonism of Northern abolitionists. He resigned his office on 15 Jan. 1863 after Lincoln had issued his final Emancipation Proclamation. Stanly warned the president that it would do "infinite mischief" and crush any hope of realizing peace by conciliatory measures. Lincoln named no successor, and presidential reconstruction was abandoned in North Carolina for the rest of the war.

After the Civil War Stanly supported President Andrew Johnson in his struggle with the Radical Republicans in Congress, and in 1868 he canvassed California on behalf of the national Democratic ticket. But he never ceased to lament the Whig party's demise and always considered himself an "inveterate old line Whig." He died in San Francisco and was buried in Mountain View Cemetery, Oakland.

Stanly was married twice: on 24 Apr. 1832 to Julia Jones, of Hyde County, who died in December 1854, and on 10 May 1859 to Cornelia Baldwin, of Staunton, Va., the sister of lawyer-author Joseph Glover Baldwin. There were no children by either marriage. There is a photograph of Stanly by Mathew Brady in the Brady-Handy Collection, Library of Congress.

A Military Governor Among Abolitionists: A Letter from Edward Stanly to Charles Summer (1865).

Stanly, Edward. "To the people of the State of North Carolina." [Washington. 1840. https://archive.org/details/topeopleofstateo00stan (accessed June 3, 2013).