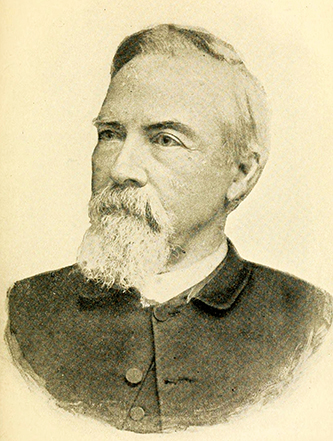 Jacob Henry Smith, Presbyterian minister, was born in Lexington, Va., the eldest son of Samuel Runckle and Margaret Fuller Smith, daughter of Jacob Fuller. His father was of German ancestry and may have been a cabinetmaker; his mother's forebears were of Scotch-Irish, French, and German lineage. Smith attended Washington College (now Washington and Lee University) and was graduated with distinction in 1843. Deciding to enter the ministry, he spent the next three years at Union Theological Seminary, where a fellow classmate described him as a methodical, disciplined student whose preparations were uniformly perfect, but who was, at the same time, vigorous and "of a cordial and joyous temperament."

Smith finished his seminary studies in August 1846 and the following month began his ministry at Pittsylvania Court House, Va. On 15 Mar. 1848 he married Catherine Malvina Miller, the daughter of Thomas Miller of Powhatan County. Two years later he became principal of the Samuel Davies Institute in Halifax County, Va., where he also taught Latin and Greek. While there he received calls from churches in Chicago, Richmond, Petersburg, Danville, Greensboro, and Charlottesville, but only after the death of his wife in June 1854 did he leave the institute to accept the call of the Charlottesville church. In Charlottesville Smith oversaw the construction of a new church building and helped organize a Literary-Theological Club, one of whose members was Judge Egbert Richard Watson. On 8 Jan. 1857 the thirty-seven-year-old Smith married Watson's twenty-year-old redhaired daughter, Mary Kelly Watson. Smith already had a six-year-old son from his first marriage, and from this second marriage were born five sons and three daughters; however, one son and one daughter died in early childhood.

In 1859 a second call was made to Smith by the First Presbyterian Church of Greensboro, and this time he accepted, arriving in April to take up his new duties. When the Civil War broke out, he served as a visiting chaplain to Confederate troops at Wilmington and in Virginia, and in March 1865 the church was turned into a hospital to care for the wounded from the Battle of Bentonville.

The ties between minister and congregation were close; Smith wrote in 1865 that the membership's "love and liberality have relieved me during these times from scarcity and from worldly anxiety." From small beginnings, he built his church into one of the largest and most influential in the synod. In 1877 he reported to the presbytery that 407 members had joined the church since his arrival and that 200 were enrolled in the Sabbath School. Two churches were formed from the First Presbyterian—in 1868 its 139 black members established St. James Presbyterian Church, and in 1887, in response to an appeal for a church in South Greensboro, 80 members formed the Westminister Presbyterian Church. But the First Presbyterian was still too small for its membership, and in 1889 plans were made for a new building that was completed in 1892.

During these years Smith played an active role in the courts and General Assembly of the Presbyterian church and served on the board of trustees of Davidson College and Union Theological Institute. He was awarded honorary doctor of divinity degrees by Hampden-Sydney College (1872) and The University of North Carolina (1877).

Smith was an outstanding preacher with a rich, full voice. At a time when revivals were a regular part of the church year, he was in great demand throughout North Carolina and Virginia. Governor Alfred M. Scales was so impressed that he offered to pay Smith's salary for him to be a full-time evangelist, but his congregation (and probably Smith himself) would not allow it. Smith did not use "hellfire and damnation" preaching but, instead, relied on scholarly, intellectual persuasion and an appeal to the consciences of individuals to transform themselves into the persons God would have them be. This reflected the affection, warmth, and joyous nature of Smith's own personality. He was a sprightly conversationalist with a good sense of humor who remained young in spirit.

By selling off tracts of his land, Smith was able to send all his children to college. His five sons became outstanding in their own right, three as ministers and two as educators; all reflected the intellect and spirit of their parents. In 1893 Smith's son Egbert was called to be copastor of First Presbyterian in order to relieve his aging father of some of his duties. Four years later Smith died at age seventy-seven after thirty-eight years of service to his congregation and city. The citizens of Greensboro, by public subscription, raised funds for a tall granite monument that stands over his grave in the city's Green Hill Cemetery. Smith's notes and some sermons are in the archives of the First Presbyterian Church.