Robert Rice Reynolds, U.S. senator and attorney, was born in Asheville, the son of William Taswell and Mamie Spears Reynolds. Reynolds was descended from a distinguished pioneering family. Colonel Daniel Smith, his maternal great-great-grandfather, was a hero of the Battle of Kings Mountain during the Revolutionary War and James M. Smith, Reynolds's great-grandfather, was the first white child born west of the Blue Ridge Mountains. Reynolds attended the public schools in Asheville and matriculated at Weaver College, a college preparatory school. He entered The University of North Carolina in 1902 and attended sporadically until 1907. An indifferent student, Reynolds failed to earn a degree but was active in campus activities such as football, track, wrestling, and the college newspaper. After college he worked briefly as a clerk with the Washington Times and published the Asheville Magazine. After one year of study, he was admitted to the bar and began a practice in Asheville in 1908. 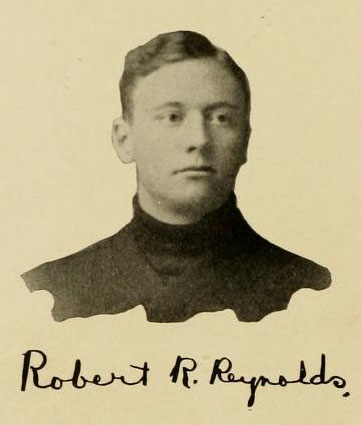 A lifelong Democrat, Reynolds was elected prosecuting attorney of the Fifteenth Judicial District in his first try at public office and served from 1910 to 1914. He ran unsuccessfully for the U.S. Congress in 1914, losing to James M. Gudger. A peripatetic traveler all of his life, Reynolds announced his candidacy for lieutenant governor of North Carolina in 1924, while traveling abroad. Although he polled a large number of votes, he failed to get the nomination. He entered the race for the U.S. Senate against Senator Lee S. Overman in 1926 and once again lost in spite of an impressive vote. Encouraged by his vote in 1926, Reynolds announced his candidacy for the Senate in 1932 on a populist platform featuring the repeal of the Eighteenth Amendment (Prohibition), redistribution of the national wealth, a downward revision of federal taxes, the end to immigration to America, and vigorous enforcement of the Sherman Antitrust Act. Reynolds's most formidable opponent was the former governor and incumbent senator, Cameron Morrison.

Although most observers believed that Reynolds had no chance to win, he ran an enthusiastic race as a poor man who would serve as champion of the little people of the state against the trusts, big business, and the Republicans—the root causes of the depression according to him. Morrison gained the support of the Democratic party hierarchy and the majority of the newspapers in the state, but "Our Bob" Reynolds launched a colorful, demagogic campaign that was a prolonged vaudeville in the old political tradition of the South. Reynolds demonstrated a personal, intimate style that appealed to the voters, and he tirelessly stumped the state in an ancient Model T Ford. He abjectly described his own poverty-stricken status (an exaggeration) while chastising Morrison for his limousine, huge mansion, and immense wealth. Reynolds mimicked Morrison's pomposity and accused him of eating "Red Russian fish eggs" (caviar) instead of "good ole North Carolina hen eggs." He blamed the wealthy trusts for the depression and managed to tie Morrison to big business by emphasizing his public defense of the Duke Power Company as a "charitable institution."

Reynolds astounded the experts by leading the first primary and then won an overwhelming victory against Morrison in the runoff with 65.4 percent of the vote—the largest majority attained in a Democratic primary in North Carolina up to that time. The incredible victory was achieved by a candidate who had never won a major political office, had limited experience and resources, and was the first wet candidate for a statewide office since state Prohibition was instituted in 1908. Reynolds won because Morrison failed to take Reynolds's candidacy seriously until it was too late, and because Reynolds shrewdly parlayed the peoples' discontent with government, big business, the depression, and Prohibition into a personal attack on Morrison.

In his first term in the Senate, Reynolds served on the Committee on Territories and Insular Affairs, Banking and Currency, Military Affairs, and the District of Columbia Committee, which he later chaired. He voted for practically all of the New Deal legislation, an unusual political stance for a southern politician, and was an avid supporter of Franklin D. Roosevelt in the 1936 election campaign. From 1936 to 1944 Reynolds, along with Representative Joseph Starnes of Alabama, unsuccessfully introduced a series of bills designed to reduce immigration to the United States and to deport alien criminals. Reynolds made the reduction of immigration one of his most important political goals but had only a slight impact on immigration legislation. Senator Reynolds demonstrated a strong isolationist position on foreign affairs. He opposed America's entrance into the World Court and supported the concept of nonintervention in the affairs of foreign countries. He advocated military preparedness to create a strong fortress America capable of defending the country against all enemies.

Reynolds constantly made headlines with such antics as kissing actress Jean Harlow on the steps of the capitol and endorsing Lucky Strike cigarettes. Due to continual publicity and his support of the popular Roosevelt, Reynolds was reelected to the Senate in 1938 by a decisive margin over Frank E. Hancock, Jr., in the Democratic primary and Republican Charles Jonas in the general election. In 1939 Reynolds broke with President Roosevelt over the issues of patronage and foreign policy. He became more outspoken in his isolationism and opposed most of Roosevelt's foreign policy decisions including Lend Lease and the decision to participate in the United Nations at the end of World War II (the Connally Resolution). Also in 1939 Reynolds formed an organization called The Vindicators Association, Inc., a patriotic group dedicated to 100 percent Americanism, an end to immigration, defense against alien enemies, and keeping America out of war. In 1944 he changed the name of the Vindicators to the American Nationalist party and this organization survived until October 1945.

Because of his isolationist attitudes and some ill-considered remarks praising Nazi Germany, Reynolds was marked by the press as pro-Nazi, and this allegation followed him throughout his political career. The charge was unfounded, but the pro-Nazi allegation, his rigid isolationism, his clowning, his inattention to crucial legislation, and his failure to sponsor any meaningful legislation led to his increasing unpopularity and his decision not to stand for reelection in 1944. In 1942 Reynolds was next in seniority to succeed as chairman of the Military Affairs Committee, the committee most involved with military preparedness in the United States. After the death of Senator Morris Shepherd, the press and several key senators opposed the elevation of Reynolds as chairman because of his isolationist views, and Reynolds's critics vigorously attacked the antiquated seniority system that had thrust him into a position of power. After a protracted struggle Senator Reynolds was approved as chairman, but he exercised little real power during World War II as the key decisions were made by Roosevelt and the military establishment.

Reynolds left the Senate in January 1945 and spent most of the remainder of his life in the practice of law and in semiretirement on Reynolds Mountain near Asheville. In 1950 he emerged from retirement and announced his candidacy for the U.S. Senate seat held by Frank Porter Graham but campaigned very briefly and managed to get only 58,752 votes, which placed him third in a four-man race.

He was a Methodist, Moose, Elk, and a member of Beta Theta Pi and the Junior Order of United American Mechanics; he also belonged to the Asheville Country Club and the National Press Club in Washington, D.C. Reynolds was the author of Wanderlust and Gypsy Trails. He died of cancer in Asheville and was buried in Riverside Cemetery.