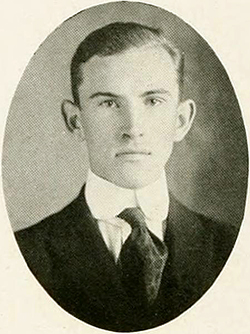 William Tannahill Polk, editor, author, and lawyer, was born in Warrenton of Scots-Irish ancestry. His father, Tasker Polk, was a lawyer, orator, poet, and the nephew of President James Knox Polk. His mother was Elisa Tannahill Jones Polk, a housewife and artist; she was descended from Edward Jones (ca. 1698–1751) and Abigail Sugars Jones, two of the earliest settlers in present-day Warren County. He attended the Miss Lucy Hawkins School, widely known throughout the state, and Warrenton High School, operated by John Graham, both private schools. At age seventeen he entered The University of North Carolina, where he received an A.B. degree in 1917. At Chapel Hill he was a member of Golden Fleece honorary society, Phi Beta Kappa, and Zeta Psi. In his freshman year, he broke an ankle playing baseball and while in the infirmary wrote a story that won a prize. He started writing for the Tar Heel, later becoming managing editor and then editor; he also wrote university news for the state papers. Polk studied journalism at Columbia University and read a set of books called The Library of Original Sources, to which he ascribed most of his education. Afterwards he took law courses at Harvard, rooming during his first year in an attic with Albert Coates, Thomas Wolfe, and Thomas S. Kittrell.

During World War I Polk entered the army as a private (1917) and was promoted to second lieutenant. After receiving his license to practice law from the court where Walter Clark was chief justice, he joined his father in the firm of Polk and Polk (1922–28) and then practiced in the firm of Polk and Gibbs (1928–42). In addition to his legal work, he wrote book reviews, poetry, magazine articles, and short stories. Most of his short stories appeared in Story Magazine. One, "The Patriot," was reprinted in O'Brien's Best Short Stories of 1930. "The Fallen Angel" and "The Hunter's Moon" were published in North Carolina in the Short Story, edited by Richard Walser. The first short story that he wrote after college, entitled "Croix de Cuisine," was about the army; Collier's bought it for $400 and changed the title to "So Long, Lilly." "The Hated Helper" appeared in the South Atlantic Quarterly. His book, Southern Accent, was an immediate success. Dr. Clarence Poe, editor of the Progressive Farmer, said, "William Polk was one of the best interpreters of Southern life that we have had in this generation. And he was one of the wisest in his thinking about what should be done about our present problems in North Carolina and the South."

During a cruise around the world in 1931, he met Marion Campbell Gunn, of Canada, whom he married on 30 June 1931 in Toronto, Ontario. They had two daughters: Marion Knox, a composer, and Catherine Ross. William T. Polk was a member of the Episcopal church and a Democrat. A portrait by Warren Brendt is owned by the Greensboro Public Library. At the time of his death in Washington, D.C., he was attending a conference of the National Editorial Writers Association. He was buried in Fairview Cemetery, Warrenton.