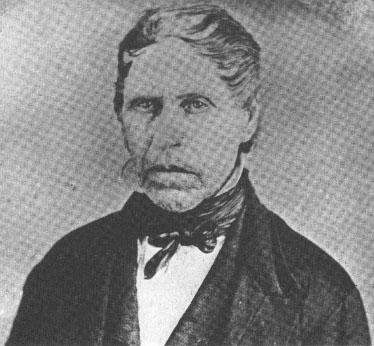 Archibald Monk, political leader and educator, was born on Monk's Branch of Dunhams Creek, Moore County, the oldest of eleven children of James and Catherine Monk, both natives of Scotland. His father, veteran of a stint in the North Carolina Continental Line during the American Revolution, was for many years a precentor at Union Presbyterian Church near the Monk farm.

Educated at Moore County Academy and at Fayetteville Academy, Monk in 1815 opened a dry goods store in Fayetteville in partnership with David D. Salmon of Sampson County. He informed the Fayetteville public in August 1818 that he would "attend to the Renewal of Notes in any of the Banks of this place" on the condition that the interested parties furnish him "with the requisite sum of money." By 1820 he had moved to Sampson County, where he operated a general store in Piney Grove District with his brother, Cornelius H. Monk. He soon relocated in Westbrooks District and acquired extensive landholdings on both sides of the public road that ran from Clinton to Smithfield. He also became the owner of a general store from which the agricultural community in which he lived derived its name, Monk's Store (now Monks Crossroads). By the time of the Civil War, Monk's plantation was the largest producer of cotton in Westbrooks District.

Civic responsibility early absorbed Monk's attention, and he expended time and energy on behalf of his neighbors and county in numerous ways. With unfailing regularity he served as witness to wills and deeds, executor of wills, administrator and auditor of estates, guardian of minors, poll keeper, overseer of roads, patrol committeeman, and justice of the peace. Monk "read" medicine and traveled about his area on horseback tending to the sick from a saddlebag full of medical books and supplies. Politics and education, however, proved to be the fields in which he made his most outstanding contributions as a public servant.

In 1829 Monk was elected to his first term in the General Assembly as a representative of Sampson County; he remained in the House of Commons until 1835. As a legislator he was active in various committees and wrote numerous bills and resolutions. He gave special consideration to public education, serving on the committee on education during five sessions. Monk's support of state aid for internal improvements was a logical corollary to his belief in the imperative of public education in North Carolina. In the legislative session of 1832–33, he worked on the committee on internal improvements and later guided a Sampson County committee to help promote a broad program of expansion, notably railroad construction. He proceeded to break with the Democratic party when it became clear that President Andrew Jackson opposed distribution of federal funds to the states for internal improvements.

One of the founders of the new Whig party in Sampson County and that party's most influential spokesman in the area, Monk was defeated by a Democrat when he ran for the state senate in 1835 and again when he sought election to the lower house five years later. He did have the satisfaction of keeping Westbrooks District faithfully in the Whig column from 1835 to the end of the antebellum period. Whether as a delegate to Whig state conventions or as a party committeeman or assistant elector, Monk pressed the cause of every Whig gubernatorial and presidential candidate in North Carolina.

Notwithstanding his strong Whig affiliation in a Democratic county, Monk effectively promoted public education locally after his terms in the House of Commons. The Whig-controlled General Assembly finally succeeded in passing a comprehensive common school law early in 1839. That summer Monk was counted among those citizens named by the Sampson County Court of Pleas and Quarter Sessions to comprise a committee to launch the common schools in the county. Immediately elected chairman of the board of county superintendents, he continued in that capacity until 1865. Under Monk's zealous and efficient leadership, Sampson County developed one of the most progressive school systems in North Carolina. In 1859 he proudly informed Calvin H. Wiley, state superintendent of common schools, that Sampson County "goes ahead of any of the adjoining counties in the cause of education." Unfortunately, the progress achieved by his many years of dedication to the common schools was mostly undone by the Civil War.

Monk had diverse interests to complement his political and educational commitments. Long an active Mason, he was the first secretary of Hiram Lodge No. 98 in Clinton, organized with his assistance in 1827. Like his parents he was a Presbyterian, and on a visit to Moore County in 1843, he too became a member of Union Church. The post office established at Monk's Store in 1848 had Monk, the community's leading citizen, as its postmaster. Two years later his respectable stature earned him a place at the district meeting in Wilmington to select one Whig and one Democratic representative to attend a convention in Nashville, Tenn., to try to resolve the controversy then raging over the territorial extension of slavery. By the time he made his will in 1856, Monk could state that his handwriting was so well known in Sampson County that he had no need for any witnesses. As befitted a son of a soldier of the American Revolution, he lent his best efforts the next year to raising money for the erection of a monument on the battlefield at Moore's Creek Bridge. He retained his position as postmaster at Monk's Store under the Confederate government when North Carolina seceded from the Union. Receiving a presidential pardon after the Civil War, he resumed his postmastership under the federal government, only to lose that job with the advent of Reconstruction.

On 5 Aug. 1824 Monk married Harriet Hargrove, the daughter of Aaron and Jane Carr Hargrove of Piney Grove District, by whom he had nine sons and two daughters. He died at his home at Monk's Store of an intestinal disorder and was buried next to his wife in the family cemetery on his plantation. In 1979 his house was moved to Newton Grove, where it was restored as the centerpiece of Heritage Place in Weeks Park.

In appearance Monk was of medium height and build, with brown hair and eyes. At least one daguerreotype of him reveals a strong but narrow face etched with age and character. A number of his informative common school reports and letters are in the Reports of Chairmen of County Superintendents of Common Schools (1841–46), the Common School Reports of the Superintendent of Public Instruction (1852–64), and the Calvin H. Wiley Papers—all in the North Carolina State Archives, Raleigh—and in the Calvin H. Wiley Collection in the Southern Historical Collection at the University of North Carolina at Chapel Hill.