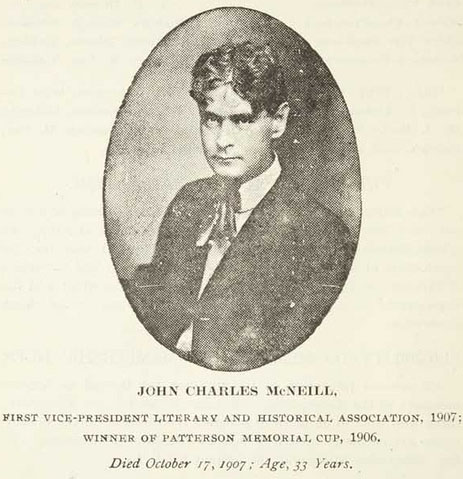 was a Baptist minister who had been converted from Presbyterianism. John Charles, as he was always called, was the youngest child of Captain Duncan and Euphenia Livingston McNeill, both industrious, thrifty, and educated. Captain McNeill, a graduate of old Trinity College in Randolph County, had been a newspaper editor and poet. One of his last efforts was a eulogy to his son (Charlotte Observer, 18 Jan. 1908). John Charles had three sisters and a brother: Mary Catherine (Mrs. Jasper Lutterbok Memory), Ella (Mrs. Daniel A. Watson), Wayne Leland, and Donna. In and around Wagram lived his many cousins and kinfolk, the Johnsons and the McMillans.

Young McNeill's boyhood was an unusually happy one. He worked on the farm alongside the white and black laborers; he roamed the woods and swamps beside the Lumber River; he went swimming and hunting and fishing. He attended Richmond (later Spring Hill) Academy, a one-teacher old-field school three miles from his home, where he won most of the prizes offered. Adjoining the academy was the unique Hexagonal House, in times past the meeting place of the local Temperance Society. When he was twelve, the family moved to neighboring Riverton, a community of McNeills and Johnsons and McMillans. His preparatory schooling nearing an end, he was sent for a year to the Whiteville Academy, where he lived with his sister, Mary Memory, and paid for his board by working in a store and doing other odd jobs. The year following, at eighteen, he taught in a rural school not far from Statesboro, Ga., where he lived with his second sister, Ella Watson. Like John Charles, his sister Donna never married.

Predictable it was, perhaps, that sooner or later he would go to Wake Forest College. McNeill was past his twentieth birthday when he enrolled there as a freshman in 1894. Almost immediately he attracted the attention of his English teacher, Benjamin F. Sledd—"Old Slick" to the students—who, because he was impressed with the maturity of McNeill's first composition, signed him up as his theme reader. McNeill's first printed poem seems to be one included in the December 1894 issue of the Wake Forest Student, a campus journal of which he later became editor. His years as an undergraduate were busy ones. He excelled in all his subjects, particularly the courses in English, French, and German. He read carefully prepared papers before the college Historical Society. During his junior year he studied law and in the summer of 1897 passed an oral bar examination. He was graduated with an A.B. in 1898 summa cum laude, the valedictorian of his class, and returned to Wake Forest as an instructor in English, receiving an M.A. in 1899. Then he went to Mercer University in Georgia and taught English for a year while a professor was on leave.

At this time, McNeill was tall and angular, with gray eyes and black hair, and rather poetically careless of his appearance. Many writers who knew him have remarked on his "melodious voice." He was twenty-six, and, with the notion that he ought to settle down, he opened a law office in Lumberton. His interests lay in people and writing, not in abstract law, which bored him. Only when a case presented the personalities and capricious actions of his clients was he avidly involved. For the most part he lazed about his office, where he kept a pet possum, or fished in the Lumber River. He purchased an interest in the weekly Argus of Lumberton and, it is said, wrote poems and editorials for it. (No copies of 1900–1902 are extant.) When requested to do so, he happily wrote a brief county history to be included in the Dictionary 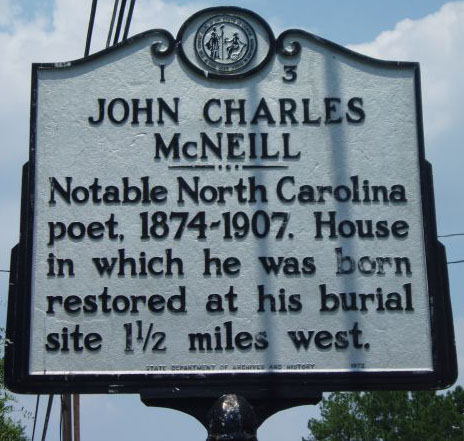 In 1904 McNeill sold his interest in the Argus and moved to Laurinburg to practice law among his home folks. He entered politics and in 1903 was elected to the state house of representatives. Among the many local bills he introduced was one to prohibit the sale of liquor in Scotland County and another to "prohibit the sale of fire-crackers more than three inches long." Meanwhile, he was pursuing his love of poetry. "Barefooted" appeared on 6 June 1901 in the Youth's Companion, one of the nation's most popular periodicals. Between January 1902 and December 1905 the prestigious Century Magazine used eighteen of McNeill's poems, both lyrics and dialect verses. On 6 Sept. 1903 the Charlotte Observer printed two selections he had sent in. In this way McNeill's reputation as a poet began to grow.

In Charlotte, editor Joseph P. Caldwell of the Observer, a man of humor and ability, was searching for a feature-story writer to succeed Isaac Ervin Avery, recently deceased. When in the summer of 1904 H. E. C. (Red Buck) Bryant, a traveling representative of the Observer, called on McNeill in Laurinburg, McNeill admitted he was ready to leave the law profession; and after an interview in Charlotte, Caldwell hired him. Immediately McNeill started sending in copy to the Observer, though he did not officially join the staff until 1 Sept. 1904. Caldwell specified no definite duties. McNeill was to write whatever and whenever he wished; if he turned in no copy, Caldwell would understand. For the next three years, the editor's faith in McNeill was amply rewarded. True, his columns came out irregularly, often on successive days, then nothing appeared for weeks. Perhaps McNeill was off to a courthouse town reporting a murder trial, or perhaps he simply lacked inspiration. His columns had various titles: among them, "From Street and Lobby," "Little Essays," "Sunday Observations," and "Unclassified Stunts." A popular column of poetry began—before he settled in Charlotte—with "Coonalities" on 10 August. He first used the heading "Songs Merry and Sad" on 2 October.

Besides the columns, he wrote news stories on weddings and fires and funerals, reviews of current periodicals, and criticisms of music and dramatic performances in Charlotte. A series of fables delighted Observer subscribers. Often he left town as a roving reporter, covering the Baptist State Convention, the dedication of the agriculture building at State College, the inauguration of President Theodore Roosevelt, commencement at Chapel Hill, and political speeches anywhere and everywhere. His comments on books were alive and unconventional. Of the popular but turbulent Reconstruction novels of his friend Thomas Dixon, Jr., he wrote: "No one of enough reading to form a comparative judgment would accuse our own Tom Dixon . . . of writing literature." Yet McNeill could himself transform violence into poetry, as he did in his much admired "To Melvin Gardiner: Suicide," about the death of an itinerate alcoholic journalist. His reports on the famous Dargan murder case in South Carolina read more like the installments of a mystery novel than like press dispatches. Though an unashamed and proud man of his region, McNeill relished a visit to New York, where he attended the theater and called on publishers; and almost the event of his life was a railroad trip through New England with Governor R. B. Glenn's party in September 1905.

On 19 October the Patterson Cup, the first literary trophy in North Carolina, was awarded McNeill for a manuscript of poems published later as Songs Merry and Sad (1906). President Theodore Roosevelt, in Raleigh at the time, presented the cup to McNeill during ceremonies conducted in the senate chamber at the state capitol. McNeill was now in demand. He was reluctant to accept an invitation to read his own poems to the Round Dozen Book Club in Hickory on 2 Jan. 1906, but accounts of the event prove how thoroughly he charmed the ladies. Archibald Henderson recalled an occasion when McNeill mesmerized his listeners with "a running fire of dialect verse, humorous commentary, negro anecdotes, and folk-lore tales."

His popularity merely stimulated his productivity. He wrote his poems on a rough tablet, sought criticism from his well-disposed colleagues, then finally located a typewriter, using his two index fingers, to prepare smooth copy for the compositor. But often no typewriter was available in the "Mule Pen," the city office at the Observer. An irregular member of the staff, McNeill was simply not assigned one. Sometimes he retreated to the Manufacturers Club, where he resided in a room on the upstairs floor, or went up to the roof garden and gazed down at the traffic in the street and on the sidewalks. To the rural McNeill, Charlotte seemed like a metropolis, and he was always delighted with the throngs coming and going. Yet his mind was never far away from Riverton, and when he occasionally disappeared, even during a busy time at the Observer, everyone knew he had gone for a while to walk the banks of the Lumber River. In the summer of 1907 he became ill and went to Wrightsville Beach in hopes of regaining his strength. When his condition worsened, he left his work and retreated to Riverton. There in "Thunder Castle," his large room on the second floor of his parents' home, he died of what was diagnosed as pernicious anemia. He was buried in the family plot at Spring Hill Cemetery. On the tombstone were engraved lines from his "Sundown" and the designation "Poet Laureate of North Carolina," an unofficial title tendered him after he received the Patterson Cup.

McNeill's contemporaries described him as a gentle man of an even disposition, joyous, considerate, companionable. About his poetry, McNeill declared: "The little loves and sorrows are my song." He wrote nature poems, love poems, and religious poems. He phrased scores of his verses in the dialect of his people, exhibiting their humor and their folklore. Songs Merry and Sad, primarily a selection of lyric poems, contains "When I Go Home," "Sunburnt Boys," "Sundown," "The Bride," and fifty-five other poems. At the time of his death, McNeill was making selections for a second book, perhaps to be titled "Possums and Persimmons." The manuscript, prepared for the press by others and published as Lyrics from Cottonland in December 1907, included "The August Meeting," "Legion," "A Few Days Off," "Punishment," "The Crown of Power," "Holding Off the Calf," "Autumn," "To Sleep," and sixty-nine others, mainly in dialect. There are hundreds of uncollected poems.

McNeill was a Democrat and a Baptist. A bronze bust (1913) of him by the Chicago sculptor, Mable Landrum, is in the Public Library of Charlotte and Mecklenburg County, and a posthumous portrait by William C. Fields hangs in the restored McNeill Birthplace near Wagram.