James Green Martin, Confederate officer and lawyer, was born at Elizabeth City, the oldest son of William and Sophia Scott Daugé Martin. His father, a prominent planter and shipbuilder, had served in the North Carolina General Assembly. Martin himself was named after his grandfather, James Green Martin, a Methodist minister of Norfolk, Va. His mother was the daughter of General Peter Daugé of Camden County. Young Martin received his early education at St. Mary's in Raleigh and then at a boys' school. Entering the U.S. Military Academy at West Point in 1836, he was graduated in 1840 fourteenth in his class, ranking behind two other prominent Civil War officers: Richard S. Ewell and George H. Thomas.

Commissioned as second lieutenant of artillery in the U.S. Army, Martin served on the northern coast, chiefly in Maine, and participated in the coast survey. While in New England, he met and married Marian Murray Read, the great-granddaughter of George Read, a signer of the Declaration of Independence for the state of Delaware. Two years later, in 1846, Martin served with distinction in the War with Mexico as a battery commander, participating in the fighting around Monterey and Vera Cruz. His leadership abilities quickly earned him promotions on 16 Feb. 1847 to first lieutenant and on 5 August to captain. In the advance of the American army on Mexico City, Captain Martin participated in the battles of Cerro Gordo, Contreras, and bloody Churubusco. In the latter engagement his right arm was shattered by grapeshot and had to be amputated. On 20 August, for his gallantry and meritorious conduct, he was brevetted with the rank of major.

After recovering from his wound, he saw action at Fort Monroe, Va., at Schuylkill Arsenal, Pa., and on the midwestern frontier at Nebraska City. At the latter place his wife died, leaving him with their four young children, but Martin was fortunate enough to meet Hetty King, the daughter of Charles King, president of Columbia College. They were married in 1858. Afterwards Martin accompanied Albert Sidney Johnston as quartermaster on Johnston's Utah expedition of that year. His last service in the "Old Army" was at Fort Riley, Kans., on staff duty. 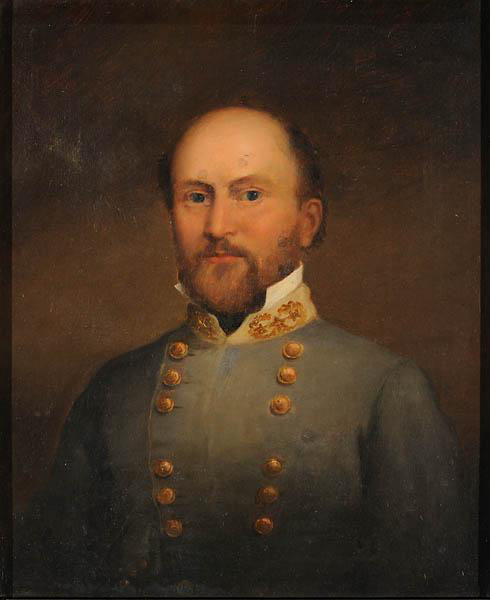 On the outbreak of the Civil War and the secession of North Carolina from the Union, Martin resigned his commission (14 June 1861) and hurried to Raleigh to offer his services to the state. Initially, he received a commission as captain of cavalry in the Confederate Provisional Army. On 20 Sept. 1861 he was appointed adjutant general of North Carolina Troops, a force of ten regiments being raised to serve for three years or the duration of the war. In this capacity Martin was responsible for organizing, training, and equipping the ten state regiments, a task for which his natural energy and previous military training were well suited. Eight days later, when state Adjutant General John F. Hoke resigned to take command of an infantry regiment, Martin was appointed as his successor with the rank of major general of militia. This post gave him command of all of the state's military forces and defenses, subject to the orders of the governor, and charged him with organizing, arming, training, feeding, and clothing the troops as well as overseeing the defense of North Carolina, particularly the vulnerable coastal sections.

Martin tackled this enormous responsibility with his characteristic energy; in fact, it was for his accomplishments in this role that he received his greatest recognition. Through his efforts, volunteers were raised, regimented, armed, and trained. By January 1862 Martin had forty-one regiments ready for Confederate service, representing about 12,000 men above the quota that had been established for the state. At his suggestion militia laws were revised and updated, and the state purchased a number of fast, sleek steam vessels to act as blockade-runners for the purpose of bringing supplies and war material from Europe. The scarcity of quartermaster stores was met by sending purchasing agents throughout the new Confederacy to procure them for the state. Martin also contracted with individuals and firms to manufacture arms and ammunition in various towns and cities in North Carolina.

To enable his newly organized regiments to meet that first winter of 1861–62, Martin established or contracted with cloth factories to manufacture uniforms, blankets, and other articles. In addition, purchasing agents bought spare cloth and articles of clothing from the general populace and went to other Confederate states to buy cloth. It is to Martin's credit that the state's soldiers on the whole endured the winter comfortably and that North Carolina was the only Confederate state to clothe its own troops in the field. Only in the area of coastal defense did his energy and skill fail to make a significant impression. Here, through no fault of his own, sufficient heavy cannon and naval forces were simply not available in time to stop the overwhelming onslaught of the Burnside expedition.

After establishing the state's offensive and defensive capabilities at an operational level, Martin applied for a field command. This he received with his appointment as brigadier general in the Confederate army on 17 May 1862, to rank from 15 May. On 2 June he was assigned to command the District of North Carolina, with headquarters at Kinston. However, on the night of 30 June General Robert E. Lee ordered Martin to move at once to Virginia to reinforce Lee's Army of Northern Virginia, then engaged in the fierce Seven Days' Battle around Richmond with General George B. McClellan's Union army. Leading a brigade of North Carolina regiments then under his command, Martin arrived too late to participate in the fighting and was ordered back to North Carolina. There he assumed the double duty of adjutant general and commander of all the state's forces. For reasons not disclosed in the records, he resigned his commission on 25 July but was reappointed to brigadier general on 11 August (confirmed 30 September). On 18 August he was formally assigned to command the District of North Carolina, comprising all the territory from the Roanoke River to the South Carolina line. He continued in this capacity until the fall of 1863, when he was instructed to organize a brigade of troops from the regiments under his command.

Martin formed a brigade consisting of the Seventeenth, Forty-second, Fiftieth, and Sixty-sixth North Carolina regiments and encamped at Wilmington. The brigadier general was a strict disciplinarian, a quality that was usually unpopular with the rank and file, but he made these regiments a well-drilled and efficient military unit. In February 1864 he led his brigade up the coast to attack Morehead City and Fort Macon as a diversionary operation while Confederate General George Pickett attacked New Bern. Martin had pushed his way as far as Newport when he received word that Pickett's attack had failed, whereupon he returned to Wilmington. On the opening of the spring offensive of the Union forces in Virginia in May 1864, Martin's brigade was ordered to reinforce the defenses of Richmond. Arriving on 14 May, his brigade took part in the "bottling" of General B. F. Butler's Union army in the Battle of Drewry's Bluff two days later and on 20 May, as a part of D. H. Hill's division, participated in an attack resulting in the capture of part of Butler's advanced entrenchments near Howlett's House. Martin's conspicuous role in this attack won him the admiration and enthusiasm of his men, who hoisted him on their shoulders and jubilantly carried him about, shouting "Three cheers for Old One Wing!" Afterwards Old One Wing became his nickname to the troops, coined because of the loss of his right arm in Mexico, and they regarded him with warm affection.

His brigade became a part of Major General Robert F. Hoke's division and joined Lee's army in its desperate struggle against Ulysses S. Grant's Union army outside Richmond. In the battles around Cold Harbor on 1–3 June, the division occupied a critical sector on the right center of Lee's battle line, which was held against Grant's famous grand attack on the morning of the third. Afterwards Hoke's division was shifted to Petersburg and enabled General P. G. T. Beauregard's thin Confederate line to hold out against Grant's attacks on the city until the rest of Lee's army arrived to protect it. Martin's brigade played a prominent role here and in Grant's subsequent siege around Petersburg. During this engagement, Martin's health failed due to the constant strain and exposure in the stagnant trench lines. This compelled him to relinquish his field command and accept a quieter assignment as commander of the District of Western North Carolina, with headquarters in Asheville, where he remained until the end of the war. His last service for the Confederacy was to resist George Stoneman's Union cavalry raid through western North Carolina. Some of the forces under Martin's command were among the last Confederate units to surrender, and he himself was paroled at Asheville on 3 May 1865.

Martin's war record had been brilliant and untarnished. He had won the respect and admiration of his men and superiors alike—among them General Robert E. Lee, who said: "General Martin is one to whom North Carolina owes a debt she can never repay." After the war, dispossessed of much of his former holdings, Martin took up the study of law and practiced successfully in Asheville from 1866 until his death twelve years later. He also devoted some of his time to the Episcopal church as a layman and a delegate to the diocesan and general conventions. He was buried in Asheville.

F. B. Heitman, Historical Register and Dictionary of the United States Army (1903).