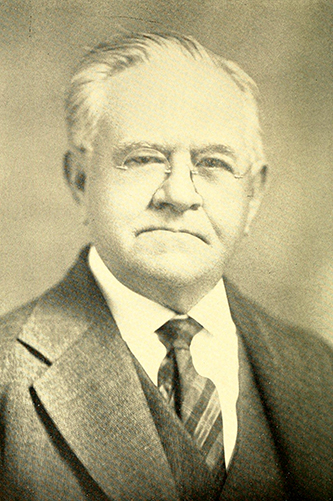 Livingston Johnson, Baptist clergyman, administrator, and editor, was born in Richmond (now Scotland) County, the son of Duncan and Catharine Livingston Johnson. As a boy he worked on his father's farm in the summer and attended Spring Hill Academy in the winter. A valuable supplement to this schooling was his participation in debates and declamations of the Saturday afternoon programs of the Richmond Temperance and Literary Society, which his mother had helped to organize. After a year's study at Wake Forest College (1877–78), the young man returned to farming. Always an active church worker, he yielded to a strong conviction that he should preach and so attended the Southern Baptist Theological Seminary in Louisville for a year (1888–89). On 18 Apr. 1889 he was ordained to the Christian ministry in the Spring Hill Baptist Church, which his maternal great-grandfather, a native of Argyllshire, Scotland, had organized in 1813.

Soon after his ordination Johnson began a six-year ministry as pastor of five churches—Rockingham, Lilesville, Pleasant Grove, Cartledge's Creek, and Roberdel. Later he was pastor of the Lumberton Baptist Church (January–October 1895), First Baptist Church of Greensboro (1895–1900), and First Baptist Church of Rocky Mount (1916–17). This experience in country, town, and city churches—in all of which, Senator Josiah William Bailey said, he was "singularly beloved"—prepared him well for the two positions of leadership he held in the denomination. From 1901 to 1916 he was corresponding secretary (now called executive secretary) of the North Carolina Baptist State Convention, and from 1917 to 1930 he edited the Biblical Recorder, the Baptist state paper. While he was secretary, the denomination made marked progress in all phases of its work. Numerically North Carolina Baptists increased 61 percent; even more significant was the 321 percent increase in contributions to missions.

During his editorship of the Biblical Recorder, two highly controversial issues seriously threatened the unity of North Carolina Baptists. The first involved the widespread objection of religious fundamentalists to the teaching of evolution, which led in 1925 to the Scopes trial in Dayton, Tenn. Several years earlier in North Carolina, such teaching had prompted harsh criticism of William Louis Poteat, a professor of biology who was then president of Wake Forest College. Extreme fundamentalists branded Poteat as unfit for the presidency of the college, accusing him of undermining the Christian faith of the students. Johnson, though his views differed from Poteat's, staunchly defended him as a devout Christian who, no matter what his convictions concerning the process by which God created man, held fast to the fundamental beliefs of the Christian faith.

The second controversy occurred during the 1928 presidential campaign of Republican Herbert Hoover versus Democrat Alfred E. Smith, one of the bitterest in the country's political history. A firm believer in the separation of church and state, Johnson held that a denominational paper should take no part in politics unless a moral issue was involved. Because of Smith's emphatic advocacy of repealing the Volstead Act, which made illegal the sale of alcoholic beverages in the United States, Johnson believed that the contest presented a clear-cut moral issue. Therefore, though he was a lifelong Democrat, as were most North Carolina Baptists, in his editorials he vigorously opposed Smith. Wishing to be fair, he opened the Recorder to letters from supporters of both candidates and repeatedly asserted that he was speaking only for himself, not for North Carolina Baptists.

Though the Recorder was, of course, primarily concerned with Baptist affairs, the paper during his editorship reflected the breadth of his interests and his warm sympathy. He made pleas for equality for blacks before the law and in employment, for increased support of the public schools, for federal aid to the unemployed during the depression, for prison reform, and for legislation that would reduce fraud and dishonesty in elections.

As secretary of the Baptist State Convention for fifteen years and as editor of the Biblical Recorder for thirteen, Johnson was called by Tom Bost of the Greensboro Daily News "the most influential and best beloved Baptist in North Carolina." In the centennial issue of the Recorder, 2 Jan. 1935, J. W. Bailey said he was "the foremost Baptist of his generation." According to Bailey, "Such was the kindliness of his heart and the brightness of his faith that few paused to consider his remarkable intellectual capacity or his indefatigable industry."

Johnson was for many years a trustee of Wake Forest College, of Meredith College, and of the Southern Baptist Theological Seminary, serving on the executive committee of the first two institutions. He was also a member of the executive committee of the Southern Baptist Convention and of the Baptist World Alliance. He was the author of two books: History of North Carolina Baptists (1908) and Christian Statesmanship (1913). Wake Forest awarded him the D.D. degree, and the administration building of Meredith College was named for him.

In 1882 Johnson married Mary Frances Memory of Whiteville, and they became the parents of five children: Wingate Memory, Foy Elisabeth, Duncan Munroe, Frances Livingston, and Mary Lynch. His funeral was held in the First Baptist Church of Raleigh, followed by burial in Oakwood Cemetery. There is a portrait of him in the classroom of the Livingston Johnson Bible Class of the First Baptist Church of Raleigh.