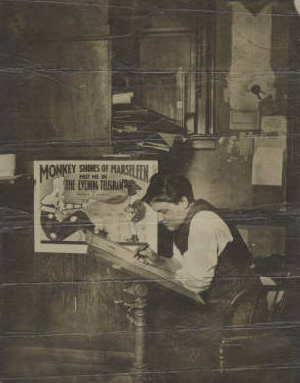 Norman Ethre Jennett, artist, illustrator, cartoonist, and author, was born in the Grantham community of Wayne County, the son of Elijah Stanton and Clarissa King Jennett. The boy was only a year old when his father died, and for several years he lived with his mother and grandmother at Grantham and attended Bethany Friends Meeting. Later his mother married William Rufus King, and young Jennett moved with them to Sampson County.

His education was limited to a few years in the common schools, but the youngster exhibited a particular talent for drawing. He whittled likenesses of people on blocks of wood, and at age fifteen he took one of his wood sketches to Marion Butler, then editor of the Clinton Caucasian. Butler inked the block and ran it with Jack Bennett's poem, "Summer's Comin'." The sketch of the jaunty black man attracted considerable notice, and Butler paid Jennett a dollar a week to work around the office and occasionally carve out other wood blocks. Soon, however, the competing newspaper, the Sampson Democrat, hired him away from the Caucasian. Some of his cartoons began to take on a political tone; and Butler, by then the leader of the newly organized Populist party in North Carolina, became his favorite subject for caricature. One cartoon showed Butler selling out to the Republicans; another pictured him as a giraffe reaching for a "senatorial plum."

Jennett's satirical characterization of the Populist leader attracted the attention of Governor Elias Carr who recommended the young man to Josephus Daniels, editor of the partisan Raleigh News and Observer. Daniels, the unofficial press agent for the Democrats in their political campaigns against the Populists and Republicans, hired Jennett as an office boy, and caricatures began to appear in the News and Observer in August 1895.

Having formerly worked with wood blocks, Jennett now perfected a technique of drawing a picture with a pencil, cutting it on a chalk plate, then making the cut from molten metal. Crude though it was, it introduced a new weapon into the political campaigns of the 1890s. Jennett's cartoons against the Fusionists became a popular feature in the News and Observer and won him the attention of many leading Democrats. His colleagues called him the "Sampson Huckleberry."

With loans from Julian S. Carr of Durham, Jennett in 1897 was able to accept a scholarship from the National Academy of Design in New York. The following year he attended the William M. Chase School of Art. Meanwhile, he sold many of his drawings to such publications as Life, Southern Tobacco Journal, and American Druggist and Pharmaceutical Record, and to such New York newspapers as the World, Herald, and Journal.

In the bitter off-year election of 1898, Jennett was persuaded to return to Raleigh for several months to draw cartoons for the Democrats. Daniels wrote, "I do not know how we could have gotten along in the campaigns of 1896 and 1898 without Jennett's cartoons," and in the fall grateful Democrats raised sixty-three dollars for a gift in appreciation for his "services in assisting in redeeming the state."

Jennett continued to draw for various national publications, and for several months in 1899 he worked for the St. Louis Star. He returned to New York, however, and for two years was an artist for the Brooklyn Eagle. In 1900 he painted six scenes that were exhibited at the Paris Exposition by the Mutual Life Insurance Company. The same year he spent several weeks in Raleigh drawing cartoons during the campaign for passage of the suffrage amendment.

From 1901 to 1917 Jennett was artist for the New York Herald, simultaneously working on the Evening Telegram in which one of his popular features was the colored comic strip, "The Monkey Shines of Marseleen." In 1906 McLoughlin Brothers published a selection of the strips in a book, The Monkey Shines of Marseleen, and three years later Cupples and Leon published an entirely new edition under the same title. Among Jennett's other activities during the period of his association with the Herald were the creation of the Pathe Freres' rooster, and of a comic strip called "The Arrow-Plane Girlies" for McCall's in 1912.

Jennett was art editor of both Aerial Age and Flying from 1917 to 1922, and from 1923 to 1939 he was assistant art director of the McFadden Publications. In 1948, he sold his Cedar Grove, N.J., home and moved to California. In his retirement he devoted himself to oils and watercolors, some of which were exhibited in New York, New Jersey, and California.

On 9 July 1901 Jennett married Helen Mary MacGinness, a native of Ireland. Their children, Norman Ethre, Jr., and Charlotte Clara, both lived in California. Helen Jennett died in 1967; she and her husband were buried in the Santa Barbara Cemetery.

Josephus Daniels, Editor in Politics, for a discussion of Jennett (with several factual errors).