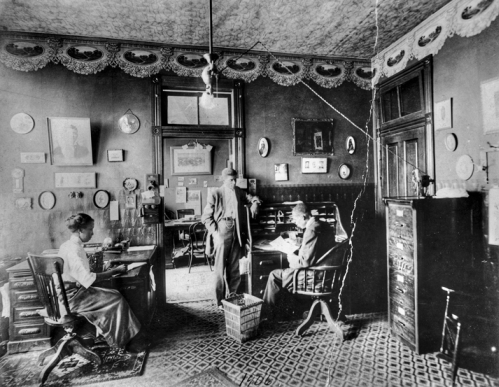 The North Carolina Mutual Life Insurance Company, the first black-owned insurance company in the state and the largest in the nation, was incorporated on 28 Feb. 1899 as the North Carolina Mutual and Provident Association. The bill of incorporation was introduced in the N.C. General Assembly by legislator Thomas Fuller, who was among the organizers of the association. Its stated purpose was "the relief of the distress of Negroes" in North Carolina. The association, led by Clinton native John H. Merrick, opened in the office of Aaron M. Moore, its medical director and treasurer, in the Kempner Corner Building at Main and Church Streets in Durham. Merrick was elected president and D. T. Watson handled daily activities as secretary and general manager. A spiritual descendant of the Free African Society founded in Philadelphia in 1787, North Carolina Mutual followed a tradition of mutual benefit associations as instruments of social welfare. Merrick had been an agent for a fraternal aid society, the Grand United Order of the True Reformers in Richmond, Va. The association grew from such roots and assumed its social welfare philosophy, becoming a catalyst for minority social and economic development through jobs, investments, loans, contributions, and support of social programs.

In the first year, all of the original organizers left except Merrick and Moore. Charles C. Spaulding was hired as general manager and the company moved into two rooms at 121½ East Main Street. These three men, known as the "Triumvirate," carried the company to unprecedented success. Merrick and Moore personally financed North Carolina Mutual for several years until 1903, when they were able to hire their first full-time agent. In 1904 the association hired its first out-of-state agent and moved into a new two-story building at 114 Parrish Street in the heart of Durham's banking and business district.

North Carolina Mutual expanded by absorbing other failing insurance companies and bought into Mechanics and Farmers Bank, another local black-owned business. The founders' business philosophy was compatible with the self-help advocacy of Booker T. Washington, a personal friend of Merrick and Moore, and the association was often touted as vindicating the principles promoted at Washington's Tuskegee Institute. The executives were ardent supporters of the National Negro Business League and faithful to the creed of mutual aid. During the early 1900s the three principals founded Lincoln Hospital (1901), the National Religious Training School and Chautauqua (1909), Durham Colored Library (1913), and the Rural Extension Department of the N.C. Teachers Association (1914). They served on the boards of a host of civic organizations, including Oxford Orphanage and Shaw University.

In 1919, after Merrick died, Moore was named president and the firm's name was changed to North Carolina Mutual Life Insurance Company. Viola Thompson was elected the board's first female member; Sadie Tanner Mossell, the first black female Ph.D. in America, was a member of Thompson's staff from 1921 to 1923. The company extended its reach in the 1920s to promote North Carolina College, the YMCA and YWCA, the Boy Scouts, White Rock Baptist Church, and St. Joseph's AME Church. After Moore died in 1923, Spaulding assumed the presidency, holding it until his death in 1952.

North Carolina Mutual became a clearinghouse for black politics, education, and philanthropy in the Upper South, and by 1937 it was one of the state's largest companies. Spaulding was a member of President Herbert Hoover's Federal Relief Committee and of the National Urban League, he supported the early efforts of the NAACP, and he was active in the influential Durham Committee on Negro Affairs. In the 1940s North Carolina Mutual wrote group insurance for such industrial concerns as Ford Motor Company. By 1945 it was worth $14 million and declared a dividend to policyholders from a $1 million surplus. It invested $4.45 million in U.S. Government Bonds during World War II, and officials watched with pride as the Liberty ship SS John Merrick was christened at Wilmington. North Carolina Mutual proclaimed itself the largest black-owned insurance business in the world.

Asa T. Spaulding guided North Carolina Mutual through the social upheavals of the 1960s and presided over the 1966 opening of the Mutual Plaza Building, one of the tallest buildings in Durham, erected on the soil of former Duke Tobacco holdings. Joseph W. Goodloe succeeded Spaulding in 1968 and steered the company to its $1 billion insurance-in-force level in 1971, making it the first black-managed company in America to achieve the distinction. James H. Speed Jr. assumed the company presidency in 2004. North Carolina Mutual in 2006 operated in 23 states and the District of Columbia and had assets of $151 million and $12.5 billion worth of insurance in force.

William Kenneth Boyd, The Story of Durham: City of the New South (1927).

Thank you for visiting NCpedia. Please email (slnc.reference@ncdcr.gov) our reference team with any questions.

I would like to purchase a life insurance policy.I am 62 and I am in good health, no prescription drugs.

Thanks for visiting NCpedia. Unfortunately, we are unable to fulfill you request since we are not affiliated with the company. You will need to contact the NC Mutual directly (www.ncmutualife.com).

We are not affiliated with this company. However, you can contact them at http://www.ncmutuallife.com.

I desire a Black owned and

I desire a Black owned and operated life insurance company. Please give me a quote for a 52 year old man in NJ. Thanks.

We are not affiliated with this company. However, you can contact them at http://www.ncmutuallife.com/.

Hi, thank you for your

Hi, thank you for your article but. But in North Carolina not only "North Carolina Mutual Life Insurance Company". There are a lot of insurance companies. Read more https://www.americaninsurance.com/north-carolina-mutual-life-insurance