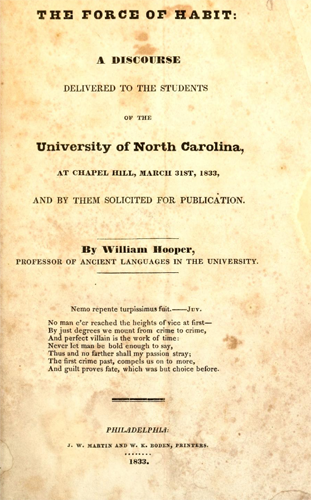 William Hooper, educator and clergyman, was born in Hillsborough, the oldest son of William and Helen Hogg Hooper. His father, a merchant, was the son of the William Hooper (1742–90) who was one of North Carolina's signers of the Declaration of Independence. His mother was the daughter of James Hogg, resident of Orange County, who was one of the commissioners appointed to select a site for The University of North Carolina. The first William Hooper—great-grandfather of the subject of this sketch—had emigrated to Massachusetts from Scotland about 1737; in Boston, he served as pastor of a Congregational church and, subsequently, as the second rector of Trinity Episcopal Church (1747–67).

After the death of her husband in 1804, Helen Hooper moved to Chapel Hill in order to provide the best educational opportunities for her three sons. Here William entered the preparatory school of The University of North Carolina in the winter of 1804 and was tutored by President Joseph Caldwell and Matthew Troy. The university awarded him the B.A. degree in 1809 and the M.A. degree in 1812. During the academic year 1812–13 Hooper studied theology at the Princeton Theological Seminary. He received additional degrees from Princeton University (M.A., 1817) and The University of North Carolina (LL.D., 1833; D.D., 1857).

Hooper entered the teaching profession as a tutor at The University of North Carolina in 1810. The greater portion of his next sixty-five years was spent as teacher and/or administrator at the preparatory, college, and university levels. His positions at Chapel Hill included principal tutor, 1810–17; professor of ancient languages, 1818–22 and 1828–37; and professor of rhetoric and logic, 1825–28.

Leaving his teaching post at the university in 1837, Hooper was named senior professor (president) at the newly formed Furman Theological Institute, Winnsboro, S.C. He remained at the institute during its first year of operation (1838–39) before becoming professor of Roman literature at South Carolina College where he taught from 1840 to 1846 and served for a time as acting president of the college.

In October 1845 the trustees of Wake Forest College elected Hooper to succeed Samuel Wait as president of the college. He accepted the offer—although he did not assume his duties until January 1847—on the condition that the friends of Wake Forest would make a concerted effort to eliminate its $20,000 debt. Hooper relinquished the presidency at the end of the fall term, December 1848. Thereafter, he served as teacher and/or educational administrator at the following institutions: Hooper's Family School, Warren County, 1849–51; Sedgwick Female Seminary, Raleigh, 1851–52; Chowan Female Institute (now Chowan College), president, 1854–62; Fayetteville Female Seminary, 1862–63, 1865–67; Mt. Vernon Female Seminary, Chatham County, associate principal, 1863–64; and Wilson Collegiate Seminary, associate principal, 1867–75. He retired to Chapel Hill in the latter year, spending the rest of his life with his daughter and his son-in-law, Professor John De Berniere Hooper, a member of the university faculty.

A deeply pious man as well as an erudite scholar, Hooper combined his career in education with a religious calling. Confirmed in the Episcopal church in 1818, he became a lay reader in 1819 and a deacon in 1820. Two years later he was ordained to the priesthood and assumed the pastoral charge of St. Johns Church, Fayetteville, on 24 Apr. 1822. He remained in this position until 1824, when doubts concerning the church's teaching on baptism, confirmation, and Holy Orders led to his resignation.

A concern for the provision of adequate educational opportunities, especially in the preparatory schools, had been expressed by Hooper during his tenure at The University of North Carolina. Invited to deliver a lecture before the North Carolina Institute of Education, meeting at Chapel Hill on 20 June 1832, he developed the theme, "Imperfections of Our Primary Schools, and the Best Method of Correcting Them." He noted three "imperfections" in particular: indolent and indulgent youth, who were not prepared for the rigors required to attain a sound education; the desire of parents and other patrons for an education that could be acquired both inexpensively and rapidly; and the scarcity of able teachers and tutors. Among the improvements he suggested for schools attempting to prepare men for the university were greater attention to the rudiments of English grammar and penmanship, concentration on "classical" studies, a more lively and spirited manner of instruction, and greater use of the oral lecture to supplement the texts required. Finally, he urged the establishment of a seminary for the education of schoolmasters.

Once he had cast his lot with the Baptists, Hooper was numbered among those advocates of higher education—for both men and women—within the newly formed Baptist State Convention of North Carolina. He was the author of the report to the convention in 1832 recommending the "establishment of a Baptist literary institution in this State"—a report that led to the founding of Wake Forest Institute in 1834.

Hooper's views on the education of women—to which he had made passing reference in the 1832 lecture—appeared in an article in the Biblical Recorder of 22 Apr. 1848 entitled "Importance of Female Education." Here, he contended that women ought to be educated because of the various "offices" and "relations" they occupied in society as daughters, sisters, wives, and mothers. But beyond the familial advantages accruing to the educated, he noted that new fields of philanthropy had been opened to educated women—visiting and instructing the poor, distributing religious tracts, composing juvenile books, teaching in "charity" schools, and cooperating in missionary and other religious societies. Then, in a sentence that might have been penned a century and a half later, Hooper added: "But education has lifted and expanded woman's views to take in the wide compass of her duty—to see that she is the 'daughter of God,' that she can[,] like him[,] diffuse happiness around her; that she can be man's equal if not his superior in the removal of crime and wretchedness in the world" [italics added].

Although he published no books, Hooper was a gifted and prolific writer. Many of his letters, articles, and essays appeared in the pages of the Biblical Recorder, the Baptist weekly published in Raleigh. He was also a popular and eloquent speaker—especially before the literary societies of various educational institutions—and at least twelve of his addresses (or sermons) were published frequently in pamphlet form. Fifty Years Since: An Address Before the Alumni of The University of North Carolina, delivered on 7 June 1859, was used extensively by Kemp Plummer Battle in writing his history of the university. The Force of Habit, originally delivered as a sermon before Chapel Hill students in 1833, is said to have been read often by President Swain to succeeding generations of graduating classes. Hooper's concern for the cultivation of the human spirit, together with the mind, was expressed in The Discipline of the Heart, to be Connected with the Culture of the Mind: A Discourse on Education, Delivered to the Students of the College, at Chapel Hill, North Carolina, August 22, 1830.

Hooper was buried in Chapel Hill beside the remains of his mother and his stepfather, President Joseph Caldwell, whom his mother married in 1809. Portraits of him are in the possession of The University of North Carolina at Chapel Hill, Wake Forest University, and Chowan College.

The Discipline of the Heart, To Be Connected with the Culture of the Mind : A Discourse on Education, Delivered to the Students of the College, at Chapel Hill, North Carolina, August 22, 1830, and Published by Their Request

Hooper, William. The force of habit : a discourse delivered to the students of the University of North Carolina, at Chapel Hill, March 31st, 1833, and by them solicited for publication. Philadelphia : J. W. Martin and W. K. Boden. 1833. https://archive.org/details/forceofhabitdisc01hoop (accessed January 11, 2013).