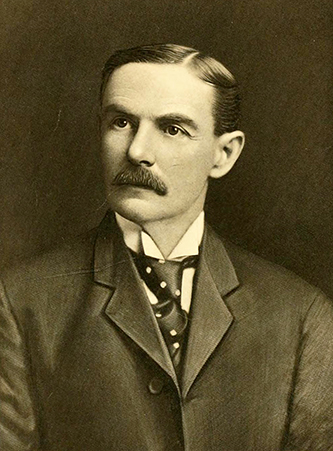 Daniel Harvey Hill, Jr., college president, teacher, writer, and historian, was born at Davidson College, the son of Isabella Morrison and Daniel Harvey Hill. His father was an outstanding lieutenant general of the Confederate Army, president of Arkansas Industrial University and of the Georgia Military and Agricultural College, and a mathematics teacher at Davidson College. His great-grandfather was Colonel William Hill of the Revolutionary War. His maternal great-grandfather, General Joseph Graham, also served in the Revolutionary War; and his maternal grandfather, the Reverend R. H. Morrison, was president of Davidson College.

After graduating from Davidson in 1880, Hill accepted a professorship of English at the Georgia Military and Agricultural College in Milledgeville, Ga., which he held for nine years. In 1889 he was elected professor of English in the original faculty of the newly established North Carolina College of Agriculture and Mechanic Arts (now North Carolina State University) in Raleigh. The young professor made many contributions to the academic life of the new college. Under President Alexander Q. Holladay he served as professor of English and bookkeeping, secretary of the faculty, and bursar. He took charge of the library in its formative years and served as its first librarian on a part-time basis for ten years. In 1905, as his reputation as an educator grew, he was elected vice-president of the college by the board of trustees. Three years later he became the school's third president, upon the retirement of Dr. George T. Winston.

Hill served as president from 1908 until 1916, a time of significant growth for the college. By the purchase of two adjacent tracts of land, the size of the campus was enlarged and several major new buildings were added, including the Nineteen-eleven Dormitory, the Engineering Building (renamed Winston Hall), the Dining Hall (renamed Leazar Hall), the YMCA Building (renamed King Religious Center), and South Dormitory (renamed Syme Hall). There were also dramatic increases in both student enrollment and faculty. The student body nearly doubled, increasing from 446 to 723. At the time Hill became president, the college had a staff of nine. At the time of his resignation, the faculty consisted of 20 full professors, 6 associate professors, 8 assistant professors, and 28 instructors. The Agricultural Extension Service, which has become an important channel for communicating research findings to the state's agricultural community, began on 1 July 1909.

During his tenure at the college, Hill did considerable historical research and writing. He was the author of the volume on North Carolina in the twelve-volume Confederate Military History, edited by Clement Anselm Evans and published in 1899. His Young People's History of North Carolina first appeared in 1907. With Charles William Burkett and Frank Lincoln Stevens, he wrote Agriculture for Beginners, a widely used textbook, and edited The Hill Readers, a series of five volumes published in 1906.

On 22 July 1885 he married Pauline White, of Milledgeville, Ga., daughter of Dr. Samuel G. White, a surgeon in the U.S. Navy. They had five children: Pauline, Daniel Harvey, Samuel White, Elizabeth (Mrs. Max Abernethy), and Randolph Isabel. Hill died in Blowing Rock, where he had gone with relatives in the hope that the mountain air would help restore his health.

In 1926 the new library at North Carolina State College was appropriately named the D. H. Hill Library. The original library building has been renamed Brooks Hall, but the present library building, which was built in 1954 and expanded in 1971, retains the name of the college's first librarian and third president.

David A. Lockmiller, History of the North Carolina State College of Agriculture and Engineering of the University of North Carolina, 1889–1939 (1939).