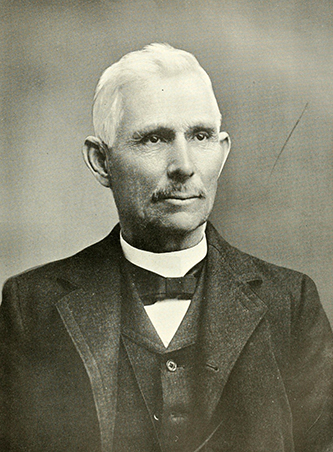 Robert Henry Ricks, farmer and capitalist, was born in the Stony Creek section of Nash County, the son of David and Martha Vick Ricks. His ancestor Isaac Ricks, an early settler on the south side of the great falls of Tar River, owned much of the land where the city of Rocky Mount now stands. Robert Ricks attended the local schools until age sixteen, and when the Civil War broke out, he was working as a hired hand on the farm of a neighbor. Enlisting in the Confederate army as a private, young Ricks saw duty in Manly's Battery and in other batteries of light artillery. After the war he returned to farming in his native county. He became unusually successful, eventually farming on a large scale, and was a pioneer in introducing bright leaf tobacco culture in eastern North Carolina.

As his capital increased, Ricks branched out into business and prospered in manufacturing and banking. He became a director (1889) and then president (1899) of the Rocky Mount Mills, the second oldest cotton mill in the state. In 1894 he was named director and vice-president of the Bank of Rocky Mount and in 1902, vice-president of the Washington Cotton Mills in Virginia. In Rocky Mount he established the Ricks Hotel firm and the Thorpe and Ricks Tobacco Company and was involved in many other smaller business enterprises. For four years a member of the Nash County Board of Commissioners, he served in the state house of representatives in 1903 and the state senate in 1905. For many years Ricks was a member of the State Board of Education and of the board of directors of the state penitentiary. He was one of the first trustees of the North Carolina Agricultural and Mechanic College at Raleigh (now North Carolina State University), and Ricks Hall on the campus honors his memory.

At his own expense Ricks erected a large marble monument to the memory of the Bethel Heroes, the Nash and Edgecombe men who fought at Bethel Church, an episode in the Peninsular campaign in Virginia at the beginning of the Civil War. Of these men, Henry L. Wyatt was the first Confederate soldier to be killed in that long and bloody conflict. The monument, placed in Battle Park on the north side of the falls of the Tar River and located a hundred yards from the first post office of the then village of Rocky Mount, was unveiled on Confederate Memorial Day, 10 May 1917.

Ricks married Tempie Thorne of Nash County in 1874; they had no children. The couple resided in a large Victorian mansion that they built on her ancestral property near the village of Gold Rock, some miles northwest of Rocky Mount. Here they were buried in a marble mausoleum. At the time of his death, Ricks was one of the wealthiest men in eastern North Carolina. In his will, considered unusually enlightened for the time, he left his business partners the controlling interest in joint enterprises. The residual estate was left in trust, the annual income to be used for the education of the lineal descendants of his nieces and nephews.

Thomas E. Ricks, ed., By Faith and Heritage Are We Joined: A Compilation of Nash County Historical Notes (1976).