Fabius Julius Haywood, physician and surgeon, was born in Raleigh of English ancestry. His father, John Haywood, born 23 Feb. 1755 at Dunbar Plantation in Edgecombe County, was state treasurer for forty years; his mother, Eliza Eagles Asaph Williams, was the daughter of Colonel John Pugh Williams, a prominent Revolutionary War leader. Eliza was John's second wife; his first wife, Sarah Leigh, died childless. Haywood's paternal ancestor, Colonel John Haywood, born in 1685 on St. Michael's Island, Barbados, British West Indies, emigrated to North Carolina in 1729 as surveyor for Earl Granville. It is said that the colonel, who was an engineer, laid off and supervised construction of the fortifications of the colony along the mouth of the Cape Fear River near Old Brunswick Town in Brunswick County.

Haywood is credited with being the first surgeon in the state to use a general anesthetic during an operation. The Raleigh Star of 9 Feb. 1848 had a vivid account of a procedure Haywood performed on Leroy Moore, a citizen of Wake County, in which was taken "a wen (weighing one pound, four ounces) which grew immediately under his arm. This is not the first time such operations had been successfully performed by Dr. Haywood; though it is the first time, we believe, that chloroform has been used in the state; and the effect was so perfect and happy as if an allwise and merciful providence had prepared it especially for the purpose. Dr. Haywood had previously used Letheon (Martan's trade name for ether) with happy effect in tapping a lady afflicted with dropsy, who twice submitted to the operation without suffering the smallest pain. . . . The anaesthetic properties of chloroform had been described by Sir James Young Simpson of Edinburgh only three months earlier (November 11, 1847)."

During the occupation of Raleigh by the Union Army in 1865–66, Haywood's property, valued at $27,000, was confiscated under the Federal Confiscation Act, and the War Department refused to return it until he had executed an oath of allegiance and received a pardon from President Andrew Johnson granting him amnesty from all acts of wrongdoing against the United States during the recent war.

Haywood was one of the seven original directors of the North Carolina Medical Society, which he helped organize on 17 Apr. 1849. Incorporated on 15 Feb. 1859 as the Medical Society of the State of North Carolina, it, in turn, established the state Board of Medical Examiners. 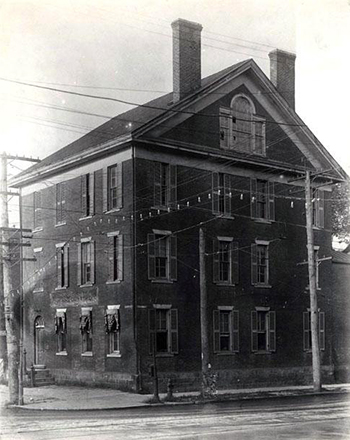 On 8 Dec. 1831 Haywood married Martha Helen Whitaker, daughter of Cyrus and Mary Rogers Whitaker. Cyrus, a wealthy Wake County landowner, was the son of Thomas and Mary Whitaker of Putnam County, Ga., and the grandson of John Whitaker (1732–84) of Halifax County, N.C. Mary Rogers Whitaker was the daughter of Michael Rogers, onetime Wake County sheriff and a member of the Provincial Congress from Wake County. Dr. Haywood and his wife had a son, Fabius Julius, Jr. (b. 1 Oct. 1840), who entered the Confederate Army soon after enrolling at The University of North Carolina. He was wounded in the leg and captured after successfully passing through enemy lines as courier for his commanding general.

Both Haywood and his wife were interested in the culture of silkworms and planted mulberry trees in their spacious backyard for them to feed on. The top floor of their three-story brick house, which stood on the corner of Fayetteville and Morgan streets opposite the state capitol, was used to store the cocoons from which their slaves spun the silk.

Haywood was a member of Christ Episcopal Church in Raleigh. With his papers in the State Archives is a certificate entitling him to a pew in that church. He died at age seventy-seven and was buried in Oakwood Cemetery, Raleigh. His wife, who died 30 May 1880, was buried beside him.

Actually Sarah Leigh Haywood, first wife of John Haywood, did not die childless. They had a son, John Leigh who died in New Bern at age 4. He is buried in New Bern, near his mother.

Doing research on the Michael

Doing research on the Michael/Berry Rogers Family. Find three of Fabius and Martha Haywood children are buried in the Haywood/Rogers Cemetery just off Forestville Road, at Wake Crossroads. There were two daughters and one son. The son was buried with Mary Whitaker, the wife of Cyrus Whitaker, dates not noted. Seeking information on Berry Rogers, who was listed as a Baptist Minister on 1860 Census. Cyrus and Mary Whitaker are buried in this cemetery, as well. This Historic Cemetery is in disrepair and needs to be put on a "Restoration" list. Especially since Michael Rogers, the first Sheriff of Wake County is buried here. We need an Historic Marker placed in this vicinity. Across the road from the cemetery was Rogers Tavern, pictured in Elizabeth Reid Murray's book entitled WAKE Capital County of North Carolina.pg vii. How would one go about requesting such a marker?

Thanks for your help.
Sylvia Watkins of Wake Crossroads.

Thanks for taking the time to post a comment in NCpedia. I've forwarded your request for more information about Berry Rogers to Reference Services at the Government and Heritage Library. Their contact information may be found at http://statelibrary.ncdcr.gov/contact.html.

Proposals for new NC Historical Markers are always welcomed. Information about submitting a proposal can be found here at the NC Highway Historical Marker Program site. I hope this information helps, and good luck in your research! Thank you!