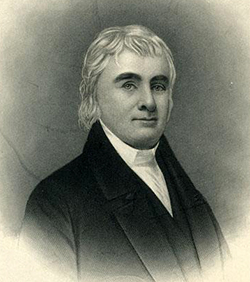 John Haywood, state treasurer and public official, was born in Edgecombe County, the son of William and Charity Hare Haywood. He first entered public life upon his election on 27 Jan. 1781 as clerk of the state senate. He served in that capacity until 30 Dec. 1786, when the legislature elected him state treasurer, a position he held for forty years.

With the passage of legislation requiring state officials to reside in Raleigh, the newly established capital, Haywood purchased two lots (190 and 191), bounded by Person, Edenton, Blount, and New Bern streets, where he built a house which is still standing. When the city of Raleigh was chartered by the General Assembly in 1795, Haywood was named one of the seven commissioners responsible for governing it.

As one of the original trustees of The University of North Carolina named by the General Assembly in 1789, he was a member of the building committee that located and was responsible for the construction of the first building on the campus and for laying out the village of Chapel Hill and selling lots there. He served on the board of trustees of the university until his death. He was also instrumental in establishing the Raleigh Academy and became a member of its board of trustees. In 1808, a newly created county was named Haywood in his honor. Following the organization of Christ Episcopal Church in 1821, he served as a vestryman.

Haywood was married twice. His first wife was Sarah Leigh, who died without issue. On 9 Mar. 1798 he married Eliza Eagles Asaph Williams (more commonly known and referred to in his will as Elizabeth), who bore him fourteen children. Haywood was originally buried in a private plot in the northwestern corner of the garden of his home on New Bern Avenue. Subsequently his remains, with those of his wife and seven of their children, were reinterred in Oakwood Cemetery, Raleigh.

After his death, a committee of the 1827–28 legislature examined Haywood's accounts and found that $68,906.80 was missing. All private claims to his property by his heirs, except his widow's dower rights, were surrendered; his land and and the people he enslaved were sold; and his stock in the Bank of Newbern was transferred to the state. His estate reimbursed the state a total of $47,601.37, but a difference in the Cherokee bonds increased the shortage to $21,735.96. Suit was entered against the estate for this amount, plus interest; however, the jury found that the executor had fully administered all of Haywood's assets except for $7,160.60 in bonds. The court rendered judgment for the state in this amount, with the balance to be recovered from any remaining lands of the deceased treasurer. Despite the shortage in his accounts, Haywood's popularity was high at the time of his death, and many citizens of the state believed that he was not guilty of wrongdoing.