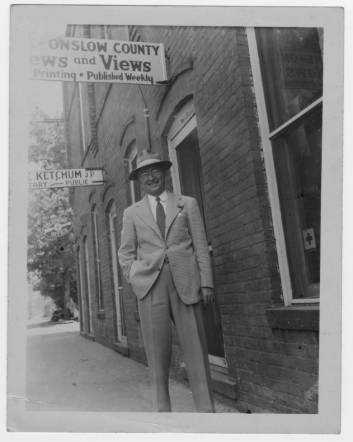 In 1933, Goerch moved to Raleigh and began publishing The State, a magazine promoting industry, tourist attractions, and the state's natural resources. In 1951 he sold the enterprise to Bill Sharpe and Bill Wright, yet continued to contribute to its columns regularly. Eighteen years earlier, in June 1933, he had also started a series of Sunday night broadcasts entitled "Carolina Chats" on radio station WPTF in Raleigh; this series continued for twenty-eight years until 10 Sept. 1961. As a third undertaking in 1933, he joined the Durham Life Insurance Company and broadcast for them on WPTF a series of programs called "Doings of the Legislature," which were aired for fourteen regular sessions and three extra sessions. In 1937, Goerch began the "Man on the Street" program, broadcasting from the front of the Wake County courthouse every Saturday morning. In addition to radio and television work, he spoke to civic organizations and groups in nearly two hundred communities in North Carolina and in thirty-one states. He was also a pilot and for fifteen years a member of the Raleigh-Durham Airport Authority. An inveterate traveler, he visited fifty-two foreign countries.

Goerch was the author of Down Home (1943), Carolina Chats (1944), Characters . . . Always Characters (1945), Pitchin' Tar (1948), and Just for the Fun of It (1954), each consisting primarily of short pieces taken from articles in The State and radio talks, usually "full of good humor." Ocracoke (1956) tells the story of the remote North Carolina island he learned to love. He also wrote feature articles for national magazines and various newspapers.

In 1965, Goerch was named "Tar Heel of the Week" by the Raleigh News and Observer ; in 1968, he was named "Distinguished Citizen of the Year" by North Carolina Civitans for "accurately informing North Carolinians of their history and progress" during his fifty-five years as a writer and speaker; in 1969, the North Carolina General Assembly commended him in a resolution for service to the state; and in 1971, the General Assembly designated him "Mr. North Carolina." For many years he served as reading clerk for the state house of representatives.

In 1916 Goerch married Sibyl Wallace, a teacher in the Orange, Tex., school system; they were the parents of two daughters; Doris (Mrs. Harry P. Horton) and Sibyl (Mrs. E. K. Powe). He was a Baptist. After his death at age eighty-three, funeral services were held at the First Baptist Church in Raleigh and burial was in Montlawn Cemetery.