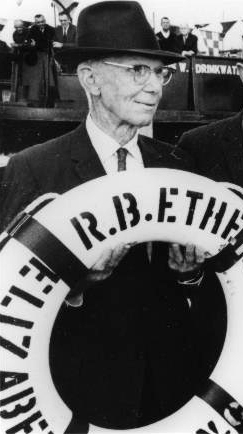 Robert Bruce Etheridge, legislator, government official, political leader, educator, and banker, was born at Mother Vineyard near Manteo on Roanoke Island. His father, Van Buren Etheridge, served for more than thirty years in the U.S. Lifesaving Service, most of the time as "Keeper" (non-commissioned officer in charge) of the Nags Head Station. His father and his mother, Matilda Tillett Etheridge, encouraged him to continue his education after he completed the limited academic courses then available in the public elementary and secondary schools of Dare County, so they shipped him off by boat to Elizabeth City, where he completed the equivalent of a high school education in the Atlantic Collegiate Institute. In 1895 he enrolled in Trinity College at Durham and in 1899 was graduated with a bachelor of arts degree.

In July 1899, one month after his graduation from Trinity College at age twenty-one, Etheridge was elected superintendent of Dare County schools, a position he held until 1907, when he resigned to become cashier of Dare County's first financial institution, the Bank of Manteo, of which he was an organizer. Never content to be involved in a single occupation, and concerned throughout his life with the peculiar problems resulting from the geographic isolation of his native Outer Banks, he offered himself as a candidate of the Democratic party and was elected to serve as the Dare County representative in the 1903 session of the state house of representatives. This was the beginning of service in the General Assembly spanning more than half a century. He was reelected to the house for the 1905 session, and then represented the Second District in the state senate in 1907, the only time he sought election to the upper chamber. Subsequently he represented Dare County in the house of representatives in 1929, 1931, and 1933, and again in 1951, 1953, 1955, 1957, and 1959.

Known affectionally by the home folks in Dare County as "Uncle Bruce," Etheridge was widely recognized elsewhere in the state as "The Duke of Dare," an appellation reputedly given him by a fellow legislator as much a result of his stately demeanor as for his championing of causes affecting his native coastal county. Active throughout his adult life in the Democratic party, he served for twenty-four years (1928–52) both as chairman of the Dare County Democratic Executive Committee and as a member of the State Democratic Executive Committee. He was clerk of superior court for Dare County from 1906 to 1910 and postmaster for Manteo from 1914 to 1922.

In 1933 Governor J. C. B. Ehringhaus appointed Etheridge director of the Department of Conservation and Development. He served until May 1949, by far the longest period of service for any of the directors of that department from the time of its formation in 1925 until it became part of the Department of Natural and Economic Resources when the state government was reorganized in 1971.

His active business life was centered around banking—specifically his position as cashier of the Bank of Manteo, 1907–33, which throughout that period was the only banking institution in Dare County. For a number of years he was also a partner, with the late Theodore S. Meekins, in an insurance and realty business in Manteo. He served on the New York World's Fair Commission; was ex officio chairman of the Cape Hatteras National Seashore Commission; and was a founder of the Roanoke Island Historical Association, producer of the Lost Colony drama at Fort Raleigh. He was a member of the Junior Order, Woodmen of America; Red Men; and Kappa Sigma, his college fraternity. His membership in Wanchese Masonic Lodge 552 covered a period of fifty-two years, including twelve years as treasurer. A lifelong Baptist, he was a member of the Manteo Baptist Church.

On 22 Apr. 1908, while serving as superintendent of Dare County schools, Etheridge married a teacher in the Manteo School, Elizabeth Webb, daughter of John and Francis Webb of Edenton. They had two children, a son, Webb, who died in 1942 while serving in the Merchant Marine, and a daughter, Matilda Etheridge Inge.

"Resolution 40: A Joint Resolution Honoring Robert Bruce Etheridge upon his 50th and Golden Anniversary as a Member of the General Assembly of North Carolina." State of North Carolina 1953 Session Laws and Resolutions Passed by the General Assembly at their Regular Session Held in the City of Raleigh Beginning on Wednesday, the Seventh of January, A.D. 1953. Winston-Salem, N.C.: Winston Printing Co. 1953. 1367-1368. http://digital.ncdcr.gov/cdm/ref/collection/p249901coll22/id/379720 (accessed February 24, 2014).