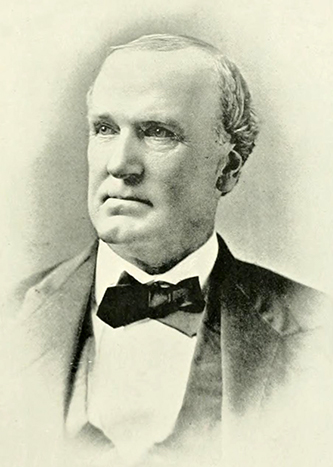 John Wilson Cunningham, planter, merchant, and political leader, was born in Petersburg, Va. His parents were Alexander Cunningham, a wholesale merchant of Petersburg, and Mattie Wilson Cunningham; the Cunningham family was of Scottish origin. In 1796, Alexander purchased a large tract of land in northwestern Person County and established a branch of his mercantile business at what by 1821 had become a post office known as "Cunningham's Store." John Wilson attended the famous Bingham's School, whence he entered The University of North Carolina, being graduated in 1840. At Chapel Hill he shared a room in East Building with Calvin H. Wiley, the future first state superintendent of North Carolina common schools (1853–65). Although Cunningham was a lifelong Democrat and Wiley an antebellum Whig, Wiley became Cunningham's fast friend and later served as his political adviser and the actual but secret author of many of his speeches, reports to his constituents, and letters to important political personages.

Following his graduation from the university, Cunningham settled on his father's Person County plantation, where he was to reside for the remainder of his life. He was much interested in the latest and best farming methods and eventually exerted a strong influence for agricultural progress in Person and adjoining counties. He tried each year to add some improvement to his own farm and acquired in time the reputation of owning one of the best-managed plantations and most attractive residences in his section of the state. He was also a successful merchant and served for many years as the presiding justice of the Person County Court. In 1844 he was elected to the House of Commons, and he represented Person County in the state senate from 1852 to 1860. During his tenure in each house he was a member of the standing committee on education and an influential advocate of public schools.

Although he favored internal improvements, Cunningham generally objected to the use of public funds to finance them, except in those instances where, in his opinion, the state was practically guaranteed a profit on its investment. He was strongly opposed to the accumulation of a large public debt and insisted that the state meet on schedule the interest on its bonds, by increased taxation whenever necessary. Such, he insisted, was both good ethics and good business management. In the bitter political and economic conflicts between East and West that characterized the antebellum period of the state's history, Cunningham usually sided with the East, opposing especially the demand for the creation of new counties in the West. Regarding banks as at best a necessary evil, he advocated a strong currency and raised his voice and vote in the legislature against the "bank craze" that seemingly demanded a legislatively chartered bank at "every village and crossroads," with full authority to flood the state with "worthless rags."

Although Cunningham considered Lincoln's election in 1860 an affront to North Carolina, and argued that the state's interests could be protected only by leaving the Union and joining a southern confederacy, his justification for such a course of action was the age-old right of revolution rather than the doctrine of secession. A strong supporter of Governor John W. Ellis, he was named to the council of state under Ellis and remained a member during the administration of Henry T. Clark, who became governor upon Ellis's death in 1861. Cunningham represented Person County in the Secession Convention that met in Raleigh on 20 May 1861 and continued in existence, with four periods of adjournment, until 1 Nov. 1862. For a brief time after 31 Aug. 1861, he served as Confederate receiver for the property of "alien enemies" in the eastern district of North Carolina, but he was forced to resign by the pressure of other duties.

In 1864–65 he again served in the lower house of the legislature. An ardent follower of Governor Zebulon B. Vance, he supported wholeheartedly Vance's resistance to encroachment of Confederate civil and military authorities upon the state's sovereignty. He served in the state senate in 1866–68 and in the legislatures of 1872, 1877, and 1879. In 1875 he was a member of the convention that revised the North Carolina Constitution of 1868.

Cunningham was an Episcopalian. In 1860 he married Helen Somerville of Warrenton; they became the parents of John Somerville (b. 5 Sept. 1861), prominent Person County planter and agricultural leader. John W. Cunningham died eighteen months after the death of his wife.

Samuel A. Ashe, ed., Cyclopedia of Eminent and Representative Men of the Carolinas of the Nineteenth Century, vol. 2 (1892 [photograph]).