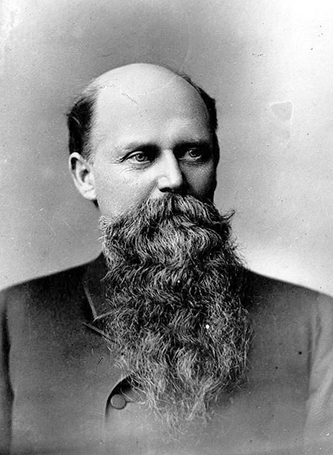 William Henry Harrison Cowles, attorney and congressman, was born in Hamptonville in the southern part of the present Yadkin County. His father, Josiah Cowles, was a native of Connecticut who had come to the South and begun a mercantile business at Hamptonville in 1816. His mother, Nancy Carson, was a member of one of the earliest families to settle in the territory between the Yadkin and the Catawba rivers; she was a daughter of Andrew Carson of Hunting Creek in Iredell County and a first cousin of Kit Carson, well-known Indian scout of the West. Both Josiah Cowles and Nancy Carson had been married earlier, Nancy Carson to Alvin Simpson Duvall of Hamptonville. W. H. H. Cowles can be understood only as a part of a large clan composed of brothers, sisters, half-brothers, half-sisters, and their families.

Before the Civil War the Cowles clan was staunchly Whig, opposed to secession as the war approached but warm in the support of the Confederacy during the war. Josiah Cowles had risen to be a member of the council of state under Whig Governor William A. Graham; and one of his sons, Andrew Carson, was a perennial member of the legislature from Yadkin County during the Civil War and Reconstruction. After the war the Cowles clan split politically; Josiah, Andrew Carson, and William Henry Harrison became Democrats. Andrew C. barely missed the Democratic nomination for Congress from the Seventh North Carolina District in 1872. Henry Clay Cowles, on the other hand, was a prominent Republican in Statesville; and Calvin Josiah, older halfbrother of W. H. H., was a leading member of the Republican party during Reconstruction and president of the North Carolina Constitutional Convention in 1868. One of Calvin's sons, Andrew Duvall, became adjutant general of the North Carolina State Guard under Republican Governor Daniel Russell. Another son, Charles Holden, was elected to the U.S. House of Representatives in 1908 as a Republican but was defeated two years later by Democrat Robert L. Doughton.

William Henry Harrison Cowles's youth was spent in Hamptonville, where he attended the common schools and the academies of the county. When the Civil War broke out, he entered the Confederate Army as a private in Company A, First North Carolina Cavalry, in the spring of 1861 and served in Virginia until near the end of the war, being gradually promoted to lieutenant colonel of the regiment. He was badly wounded twice, once at Mine Run in 1862 and near the end of the war at Petersburg. There he was taken prisoner and as soon as he could travel was paroled by Major Senaca R. Cowles of New York.

Back home, he read law under Judge Richmond Pearson at Richmond Hill in Yadkin County, was licensed to practice, and moved to Wilkesboro to practice in 1868. There he became active in politics as a Democrat. He was appointed reading clerk of the North Carolina Senate from 1872 through 1874 and then was elected solicitor of the Tenth Judicial District, serving for four years. For eight years he was a member of the Democratic state executive committee, exercising considerable influence on the party.

Until 1884, Wilkes County was in the Seventh Congressional District, dominated largely by Statesville and Salisbury influences. Factionalism gradually developed in the Democratic party between two Statesville leaders, W. M. Robbins and R. F. Armfield. Armfield, who had moved from Wilkesboro to Statesville, usually had the backing of Wilkes and Yadkin counties, and W. H. H. Cowles was largely responsible for pushing Armfield to the front in 1878 and 1880 to win the Democratic nomination and the fall election. The factionalism was finally to cost the Democrats control of the district, when Robbins was defeated in 1882 by Dr. Tyre York of Wilkes.

Before the election of 1884 a new Eighth Congressional District had been formed, which placed Wilkes with such counties as Cleveland and Gaston, rather than Iredell and Rowan. From that district, Cowles was elected to Congress for four terms, serving in the House of Representatives from 4 Mar. 1885 until 3 Mar. 1893. He declined to run for a fifth term and retired to his country place on the Yadkin River, about a mile and a half below Wilkesboro. He was living there when he died of pneumonia. He and his family were active Presbyterians, and he was buried in the Presbyterian cemetery in Wilkesboro.

Cowles was married twice, on 1 June 1870 to Rosomond Corinna Worth, from Creston in Ashe County, and on 16 Oct. 1883 to Mary Lura Bost of Newton. From the two marriages came eleven children, most of whom lived to maturity. Two sons, Miles Andrew and Stuart Lee, were educated at West Point and became career army officers; Miles Andrew served with distinction during World War I and became a brigadier general in 1942, and Stuart Lee retired with the rank of colonel. Another son, William Henry Harrison, Jr., served in World War I and became professor of mathematics at Pratt Institute. Cowles's oldest daughter, Caroline Elizabeth, married Judge T. B. Finley of North Wilkesboro. Corinna Albina married Joseph A. Gaither, an industrialist of Newton; Sarah Sherrill married R. O. Self of Raleigh; Esther married the Reverend Sidney S. Bost, Episcopal priest of Durham; and Mary Loretz married Neely Kincaid of Statesville. The younger children were reared in Statesville, where Mrs. Cowles moved after her husband's death for the better education of her children.

Calvin D. Cowles, Genealogy of the Cowles Families in America (1929).