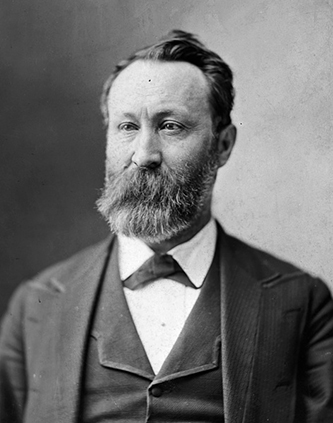 William McKendree Robbins, educator, lawyer, and legislator, was born in Randolph County to Ahi and Mary Brown Robbins. He received his early education at subscription schools and at a local academy before attending Randolph-Macon College, from which he was graduated in 1851. For the next two years he was professor of mathematics at Normal College (later Trinity College) near High Point.

On 7 Sept. 1854 he married Mary Montgomery of Montville, S.C. In 1855 the couple moved to Glennville, Ala., where Robbins opened a female college. He soon abandoned teaching, qualified for the Alabama bar, and started a legal practice in Selma, Ala. Robbins's young wife died in the autumn of 1858, leaving him with two small children.

In January 1861 Robbins volunteered as a private in the Marion (Ala.) Rifles. Two months later he helped organize the Fourth Alabama Regiment, in which he served as a first lieutenant in Company G. Robbins's first action in the war was with the conquering troops at the Harpers Ferry, Va., federal arsenal on 18 Apr. 1861. He served under General James Longstreet and fought in the major Virginia campaigns of the war, in Tennessee, and at Gettysburg; in 1864 he received a serious head wound at the Battle of the Wilderness. Robbins was present at the surrender at Appomattox Court House and by that time had attained the rank of major.

Robbins returned to North Carolina in December 1865 to open a law office in Salisbury. He had married his first wife's sister, Martha Montgomery, during the war.

Elected to the North Carolina Senate from Rowan and Davie counties in 1868 and 1870, Robbins supported the impeachment of Governor William W. Holden. In 1872 he was elected to the U.S. House of Representatives from the Seventh North Carolina District and soon afterwards moved his permanent residence to Statesville. He was returned to Congress in 1874 and 1876 and in his last term served on the Ways and Means Committee. An ardent conservative Democrat and prohibitionist, he was an out-spoken opponent of Republicanism, Negro suffrage, and the internal revenue tax on whiskey.

Robbins failed to win renomination for the congressional seat in 1878. He received the nomination in 1880 but lost the general election to the Liberal, antiprohibition candidate, Tyre York, in a bitterly contested campaign that focused on the Prohibition issue.

In 1878 Robbins returned to Statesville, where he began a law partnership with his son-in-law, Judge Benjamin Franklin Long. In 1894 President Grover Cleveland appointed him Confederate commissioner of the Gettysburg Battle Field Commission, a post Robbins retained until his death. He was a charter member of the Southern History Association in 1896.

Characterized by a local newspaper editor as "truly a great orator," Robbins participated in congressional debates on many issues of his day. His 1898 speech at Gettysburg in defense of secession was widely praised. A lifelong Methodist, he became a Presbyterian late in life to protest the Methodist Episcopal Church, South's procurement of a congressional appropriation for war losses.

Robbins died at the home of his son Frank in Salisbury after an acute stomach illness of one month and was buried in Oakwood Cemetery, Statesville. He was survived by his daughter by his first marriage, Mary Alice (Long), and by his second wife and their three children, Gertrude (Wood), Maude (McLaughlin), and Frank. Robbins's son Willis by his first marriage and his son Montgomery by his second marriage predeceased Robbins, as did his wards Congressman Gaston Ahi Robbins and Mamie Lafayette Robbins, the children of Robbins's brother Julius.