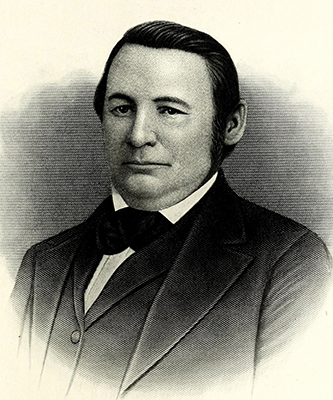 William Shepperd Ashe, lawyer, rice planter, state senator, congressman, and railroad president, was born in the Lower Cape Fear plantation community of Rocky Point, the third son of Samuel and Elizabeth Shepperd Ashe, both members of prominent planting families, and grandson of Samuel Ashe, governor of North Carolina and judge. Following a course in classical studies at Washington (later Trinity) College in Hartford, Conn., Ashe read law in the office of North Carolina Judge John de Rossett Toomen. He was admitted to the state bar only two or three days after his marriage to Sarah Ann Green of Brunswick County, in January 1836.

Shortly thereafter, he was elected county solicitor on the Democratic ticket for the four counties of the Lower Cape Fear, a position he seems to have held only briefly, for, as noted later by his son, Samuel A. Ashe, "his planting interests and his social disposition, which was at variance with the exactions of a professional life, led him . . . to abandon the practice of law." Then, doubtless with more leisure time on his rice plantation for reading and thinking, he kept well abreast of the political questions and happenings of the day and apparently remained quite active in the Democratic party. In 1844 he was selected a presidential elector on the Democratic ticket of Polk and Dallas.

In 1846, Ashe won election from New Hanover County to the state senate. In this body, he concerned himself principally with appropriations for railroad building and, more especially, with where these railways would be built. Feeling that railroads from the western part of the state should lead to the state's ports in the east, especially Wilmington, rather than connecting with lines that served the ports of South Carolina or Virginia, he advocated the construction of a railroad from Charlotte to Goldsboro, there to connect with the Wilmington-Weldon line for passage of goods to and from the port city of Wilmington. Mainly through his influence, this railroad ultimately materialized in the North Carolina Railroad, despite advocacy of other routes by such distinguished figures as governors John M. Morehead and William A. Graham.

In the election of 1848, Ashe won not only reelection to the state senate but also a seat in the U.S. Congress, which he entered in December 1849, as a freshman member of the body that would pass the Compromise of 1850. He contributed little to the compromise efforts, however, choosing rather to side with southern extremists to the extent of advocating secession as the proper course for the South. In the Congress, where he would serve two terms, his principal interests, as in the state senate, concerned internal improvements, especially the securing of federal appropriations for improving the channels of the rivers of North Carolina. Finding the Democratic members, who held the majority, opposed on principle to such appropriations, Ashe was able to persuade a good number of them to leave the chamber long enough to allow the Whigs, who had not earlier gone on public record as opposed to such measures, to pass his bill.

In 1854, Ashe became president of the Wilmington and Weldon Railroad, a fitting office in the light of his earlier legislation, which had done so much to promote the railroad, and one that he would hold for the rest of his life. He immediately set about promoting for the railroad a new era of progress and profits, concluding in England a very advantageous arrangement on the road's bonded debt, developing a large Florida travel for the line, arranging through freight trains to Charlotte via the North Carolina Railroad, and perhaps most interestingly, establishing regular steamship connections with the line in Wilmington and New York. In 1858, Ashe once again became a state senator, in order to help thwart former Governor Morehead's plan to pass legislation providing for a railroad from Greensboro to Danville, which would have cut the state in two and directed half the state's traffic away from Ashe's line.

At the Charleston convention in 1860, to which Ashe was a delegate, leading North Carolina Democrats, including Governor John W. Ellis, tried unsuccessfully to present Ashe's name for nomination for vice-president. In 1861, Ashe served in the state convention, where, in addition to being one of the most vocal spokesmen for secession, he strongly supported a constitutional amendment allowing Jews in the state to hold public office. He further advocated that the state cooperate wherever possible to promote the Confederate cause. Because of this stance, he was asked in the summer of 1861 by President Jefferson Davis, a long-time friend, to assume control of the Confederate government's transportation between New Orleans and Richmond. He accordingly took a position in the quartermaster's department, first as a major and then as a colonel, for a year. 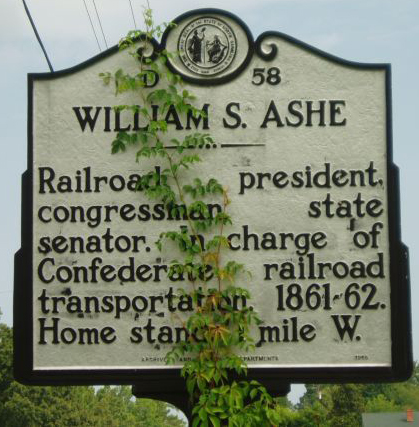 By the spring of 1862, however, with the eastern part of the state under armed invasion, Ashe was anxious to become more directly involved in the military aspects of the war. President Davis responded to his desires, first by asking him to collect guns from the citizens for the soldiers until the blockade runners could provide the needed rifles, and then by commissioning him as colonel in the field with the authority to raise his own legion of infantry, artillery, and cavalry. Hardly had he launched this latter project when fate, ironically at the hands of his own railroad, cut short his plans. In September 1862, when returning from the salt works at Wrightsville Sound that he and others had started, he received word that one of his two sons, both soldiers in General Lee's army, had been captured. Quickly commandeering a hand car, he hastened home in the hope of obtaining more information about his son's fate. During the trip, his car was struck in the darkness by an unlighted train. Ashe was mortally injured and died three days later. He was interred in the family cemetery at The Neck, near Rocky Point. Of the two sons who survived him, Major John G. Ashe moved on to Texas after the war, where he died in 1867, leaving descendants; Samuel A. Ashe would become one of North Carolina's most distinguished historians.