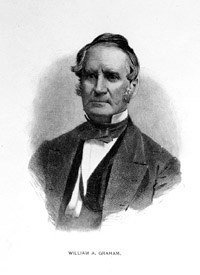 In addition to serving as governor, U.S. Senator, and Secretary of the Navy, William Alexander Graham (1804-1875) was the Whig nominee for Vice-President in 1852.  The son of Gen. Joseph and Isabella Davidson Graham, he was born on September 5, 1804, at “Vesuvius,” the family home in Lincoln County.  His father was a Revolutionary War soldier and a pioneer in the region’s iron industry.  Hillsborough Academy served as the forum for William’s college preparation.  He enrolled in the University of North Carolina in 1820 and graduated with honors in 1824.  He then studied law with Thomas Ruffin and opened a practice in Hillsborough in 1828.  In 1836 he married Susannah Sarah Washington; the union produced ten children.

Attracted to the political arena, Graham endorsed Henry Clay’s “American System,” the basic platform of the emerging Whig Party.  He served in the State House from 1833 to 1840.  As speaker from 1838 to 1840, he helped secure passage of the Public School Act of 1839.  He left for the U.S. Senate in 1840 and held that office until March of 1843.  Graham won the gubernatorial election of 1844 and took office on January 1, 1845.  Three problems confronted him: foreclosure of state held mortgages on the Raleigh & Gaston Railroad; collection of documents relating to the state’s Revolutionary War history, a task imposed by the 1844 legislature; and execution of the earlier law establishing a school for the deaf and mute.  Graham pushed the Whig agenda of internal improvements and education.  He advocated a central railroad to connect with the existing Raleigh and Gaston and the Charlotte and Columbia then under construction.  To help stabilize the fledgling school system, he proposed the appointment of a commissioner of education.

Graham returned to his law practice in Hillsborough in January 1849.  He accepted the appointment as Secretary of the Navy extended by President Millard Fillmore in 1850.  Achievements during his tenure included efficient reorganization of the coast survey and naval personnel, exploration of the Amazon, and the opening of foreign relations and trade with Japan.  In 1852 the Whig Party nominated William A. Graham for vice-president on the ticket headed by Gen. Winfield Scott.  Defeated in the general election, Graham returned to Orange County which elected him to the state senate in 1854.

Graham detested the idea of secession, equating it to Southern self-destruction.  He urged caution, patience, and compromise, earning him consideration as a presidential candidate by the Constitutional Union Party in 1860.  In the 1861 State Convention, he tried to divert the issue of secession but acquiesced when no honorable alternative remained.  As state senator from 1862 to 1864, his views frequently conflicted with those of the Confederate government; still, he sent five sons to fight for the South.  Graham was elected to the Confederate Congress and took his Senate seat on May 2, 1864.

The General Assembly elected Graham to the U. S. Senate in December 1865, but Radical Republicans gained control of Congress and refused to seat the Southern delegates.  Officially retired, he took a leading role in the effort to overthrow Republican rule in North Carolina.  Already in failing health, Graham accepted duties as an arbitrator on the Virginia-Maryland Boundary Commission.  He died on August 11, 1875, at a meeting of that group in Saratoga Springs, New York.  His body was returned to Hillsborough and interred in the cemetery adjacent to the Presbyterian Church. 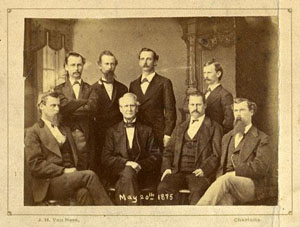