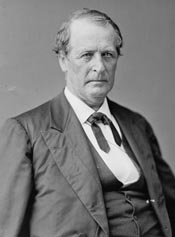 Thomas Samuel Ashe, congressman and state supreme court justice, was born at The Hawfields, his maternal grandfather's home near Graham in Alamance County, then part of Orange County. The Ashe family had been prominent in sixteenth- and seventeenth-century Wiltshire, England, and had given North Carolina many distinguished citizens since early colonial days. Thomas's parents were Pasquale Paoli Ashe and Elizabeth Shepherd Strudwick, and as as a boy he lived at The Neck, the Ashe home on the Cape Fear River in New Hanover, now Pender, County. When Thomas was about twelve, the family moved to Alabama, but he returned to North Carolina to attend the Bingham School in Orange County. He then entered The University of North Carolina and was graduated third in his class in 1832. He declined a university tutorship in order to begin studying law in Hillsborough, under Chief Justice Thomas Ruffin, and began practicing in Wadesboro in 1836. In the next year he married Carolyn Burgwin of New Hanover County, a granddaughter of Governor Abner Nash.

Ashe was elected as a Whig for a term in the House of Commons in 1842 and for a term in the senate in 1854. From 1848 to 1852 he served as his district's solicitor. In 1859 he declined his party's nomination for Congress, even though his district was Whig and he surely would have been elected. Meanwhile, he had bought and was managing a small plantation in Anson County.

In February 1861 the legislature submitted to the people the question of a constitutional convention and called for an election of delegates to it. Ashe was chosen as a Unionist delegate, but the voters rejected the call for the convention and the delegates never assembled. After Lincoln's call for volunteers in April, however, North Carolina quickly called a convention, and this time Ashe was elected to it as an immediate secessionist. In November 1861 he was elected a representative to the Confederate Congress.

In this Congress, Ashe was a member of the Committee on the Judiciary. During his two years' service he quietly but firmly opposed every major effort made there to enlarge the powers of the central government at the expense of the states or of individuals. He apparently believed, however, that the Confederacy could win its independence without such legislation and deplored the peace agitation that developed during 1863. In 1863, Ashe campaigned for reelection on these terms and lost to an avowed peace man. In December 1864 he was elected to the Confederate Senate over Edwin G. Reade, but the war ended before his term began.

In 1868, after both Zebulon B. Vance and Augustas H. Merrimon had declined the nomination, Ashe agreed to become the Conservative party candidate for governor, even though General Edward Canby's orders prevented him from voting at that time. Ashe campaigned vigorously against the ratification of the constitution proposed by the Convention of 1868, but he was defeated by W. W. Holden by a vote of 92,235 to 73,594.

In 1872, Ashe was elected to the U.S. House of Representatives as a Conservative. He served on the Committee on Coinage, Weights, and Measures, and his only speech of importance was one urging the continuance of the mint at Charlotte. Ashe was reelected in 1874 and this time was on the prestigious Committee on the Judiciary. He participated in preparing impeachment charges against Secretary of War W. W. Belknap and in framing the resolution providing for an electoral commission to decide the disputed election of 1876. He also participated in the investigation of James G. Blaine in the Mulligan Letters scandal. The principle of rotation in office then operating in North Carolina ruled that representatives should serve only two terms, and Ashe was not a candidate for reelection.

In 1878 the Democratic Party secured Ashe's election as associate justice of the state supreme court, where he was a dependable, conservative judge. In J. M. Worth, Treasurer v. Petersburg Railroad Company (89 N.C. 301), he ruled that the general assembly could in no way circumvent a charter exempting a company from paying taxes. And in William Horne v. The State of North Carolina (84 N.C. 362), he decided that the constitutional amendment of 1879 removed his court's jurisdiction from claims against the state involving Reconstruction bonds. He was reelected to the court until his death at home. He was buried in East View Cemetery, Wadesboro.

In addition to his public career, Ashe was a trustee of The University of North Carolina for thirty years and vestryman in the Calvary Episcopal Church of Wadesboro for thirty-one. Ashe was survived by an unmarried daughter, Josephine; five married daughters, Mrs. Richard H. Battle, Mrs. A. J. Hines, Mrs. J. A. Lockhart, Mrs. James McNair, and Mrs. James C. Marshall; and by a son, Samuel T. Ashe.

Journal of the Confederate Congress, 1905.

Image courtesy of the Library of Congress via the Biographical Directory of the U.S. Congress. Available from http://bioguide.congress.gov/scripts/biodisplay.pl?index=A000309 (accessed January 31, 2013).