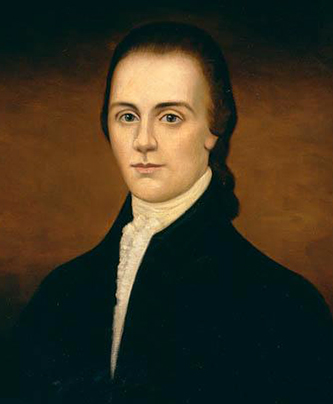 Abner Nash (ca. 1740-1786) succeeded Richard Caswell to become the second governor of the young state. He was born in present-day Prince Edward (then Amelia) County, Virginia. Of Welsh extraction, he was the son of John Nash and the former Ann Owen. Though little is known of his educational background, he began the practice of law in 1757 and in 1761-1762 represented Prince Edward County in the House of Burgesses. Nash was first married to Justina Davis Dobbs, the widow of Governor Arthur Dobbs. His second marriage was to Mary Whiting Jones of Chowan County.

Soon after leaving the Virginia legislature, Nash moved to North Carolina, residing briefly in Hillsborough and Halifax. Experiencing success in both law and politics, he represented the town of Halifax and Halifax County in the North Carolina assembly in 1764-1765 and 1771, respectively. In the early 1770s Nash relocated to New Bern, the seat of royal government, where his professional and public careers prospered. Moreover, as tensions with Great Britain mounted, Nash distinguished himself as a leading and zealous advocate for the Patriot cause. Indeed, when Governor Josiah Martin fled from New Bern for his own safety, he singled out defiant Nash for special censure.

From 1774 to 1776 Nash was a delegate to each of North Carolina’s five provincial congresses, while also serving as a member of the Provincial Council. In 1777 he represented New Bern in North Carolina’s first General Assembly as an independent state, serving as speaker of the House of Commons. During the two following years, he remained in the lower house of the legislature as a representative of Craven County. In 1779 and 1780 Nash sat for neighboring Jones County in the state Senate, serving briefly as speaker. On April 20, 1780, he resigned his seat upon his election as governor.

As chief executive Nash drew upon every resource to support the national war effort while protecting North Carolina against British attack from the south. Like Caswell before him, he found his constitutional powers woefully inadequate to the task that lay before him. Responding to his pleas, the legislature created an emergency Board of War to assist him; but Nash soon found that the Board’s creation had weakened his powers even further. Bitterly, he complained that “men, not knowing whom to obey, obeyed nobody.”

In August 1780 the disastrous defeat of Patriot forces at Camden rendered circumstances still more desperate, for North Carolina now lay open to invasion by Cornwallis’ army. Eventually, the tide of war began to turn following the battles of King’s Mountain and Guilford Courthouse, but the exhausted and frustrated Nash had no desire to serve longer in a position he considered untenable. When nominated for reelection in June of 1781, he cited “excessive Fatigues” and “want of health” in asking that his name be withdrawn from consideration.

Despite his departure from the governorship, Nash remained active in public life on both the state and national levels. He returned to the House of Commons in 1782 and 1784-1785; and three times accepted election to the Continental Congress (1782, 1783, and 1785), where he came to recognize the pressing need for a stronger central government. It was while attending Congress that Nash died in New York City, on December 2, 1786. Initially buried there in St. Paul’s churchyard, he was later moved to the cemetery of his Craven County plantation, “Pembroke.”

Hamilton, Joseph Grégoire de Roulhac. 1909. Presentation of portrait of Governor Abner Nash to the State of North Carolina in the hall of the House of Representatives, at Raleigh, November 15, 1909, by the North Carolina Society of the Sons of the Revolution. https://archive.org/details/presentationofpo00hami