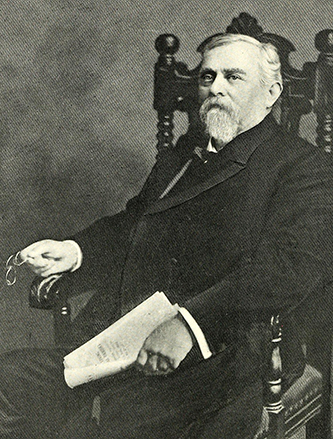 Thomas Munro Argo (Variant: Thomas Monroe Argo), Confederate officer, attorney, solicitor, and legislator, was born in Weteumpka, Ala. A few years later, his family moved to McMinville, Tenn., where young Argo lived during his boyhood and obtained his early education. He was the eldest of seven children of William Hammond Argo and Julia Cain. His parents were originally from North Carolina, and his father was of French Huguenot extraction. From Tennessee, Argo moved to North Carolina in 1860 to enter the university. He was graduated with honors in the class of 1863. Following graduation, he immediately entered the Confederate Army, enlisting in the First North Carolina Heavy Artillery, and was commissioned second lieutenant of Company D by Governor Zebulon B. Vance. He was wounded and captured in the defense of Fort Fisher in January 1865 and remained a prisoner until the end of the hostilities. He returned to Chapel Hill in 1865 and studied law under William A. Battle and S. F. Phillips. He received the LL.B. degree and was admitted to practice law in 1867, beginning his profession in Chapel Hill. In 1868 and 1870 he was elected from Orange County to the legislature as a Democrat (at that time called a Conservative). His ability was quickly recognized by his associates, and he was an active representative, although the Republican was the dominant party of that day. He figured prominently in the fight to drive the carpetbaggers from the state.

Argo removed to Raleigh in 1872, where he resided and continued to pursue his legal profession for the remainder of his life. In 1884 he was a leader in the formation of the state bar association, serving as secretary of the organization for some time. In 1886 he was elected solicitor of the fourth judicial district, an office he held until 1891. Running as an independent candidate against the regular Democratic nominee, he won by a wide majority. During his term, he was connected with much of the important litigation in the courts of Wake and the adjacent counties and frequently acted as leading counsel. Among his prominent cases was that of Samuel Coley against the Southern Railway. He also prosecuted the famous case State v. Cross and White ; Cross and White were officials of the State National Bank in Raleigh who had wrecked the institution and fled to Canada. Argo had decided political convictions and was for many years a conservative Republican on the national level. In state and local issues he was an independent. His political affiliation, as may be surmised, restricted his career to some extent, in a community so largely Democratic and characterized in former years more conspicuously than in later years by political intolerance.

Legal activities did not prevent Argo from taking part in civic and local affairs. He served as a member of the board of directors and of the executive committee of the insane asylum. He was a member of the William G. Hill Masonic Lodge No. 214. An Episcopalian, he was one of twenty-two men who signed a petition to form a second white Episcopal church in Raleigh. He was a charter member of the Church of the Good Shepherd, organized in 1874.

Argo was married first in 1864, to Mattie Hubbard; to them was born one son, Fordyce M. Following his first wife's death, Argo married Mrs. Kate Baker in 1876; she died in 1886. On 4 June 1893 he married Mrs. Ernestine Spears Perry. To this union were born three children, Thomas, Ruth, and Laura. In 1908 it became apparent that Argo's health was failing, but until this last illness he was an active member of the Raleigh bar. He died at the age of sixty-eight and was buried in Raleigh's Oakwood Cemetery.

Ernest Haywood, ed., Some Notes in Regard to the Eminent Lawyers (1936).