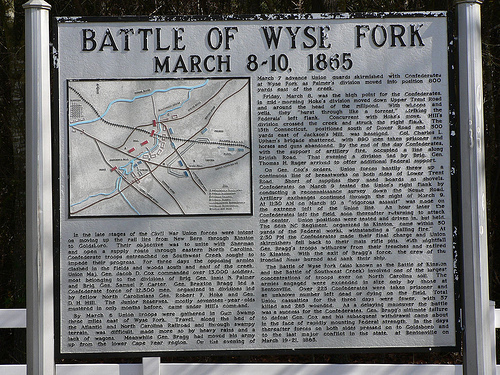 The Civil War battle of Wyse Fork, also known as the Battle of Southwest Creek, was a fierce engagement between Union and Confederate forces near Kinston on 8-10 Mar. 1865. The Union army of Maj. Gen. William T. Sherman had entered North Carolina in early March 1865 headed for Goldsboro. Three divisions under Maj. Gen. Jacob D. Cox had left New Bern to join forces with Sherman. Meanwhile, Gen. Joseph E. Johnston, who had recently assumed command of all Confederate forces in North Carolina, began to assemble an army with which to strike Sherman. Anxious to prevent a junction of the forces of Sherman and Cox, Johnston instructed Gen. Braxton Bragg to slow the progress of Cox's 13,000-man corps as it marched west from New Bern.

Bragg, a native North Carolinian, chose to make a stand several miles east of Kinston at Southwest Creek. Two seasoned major generals from North Carolina commanded his force: Robert F. Hoke and Daniel Harvey Hill. By the time Bragg, Hoke, and Hill met on the night of 7 March to plan an attack the next day, the Confederates were strongly entrenched on the west bank of the creek. Cox had positioned his troops across the waterway.

In the early morning hours of 8 March, Hoke made an undetected crossing of the creek, flanked the Federals, and slammed into their rear. Hill crossed over about noon, and by day's end the Confederates had secured one of the last southern field victories of the war. Not only had Cox sustained significant losses in killed and wounded, but also Hoke had captured 1,500 of his soldiers. Nonetheless, the Confederate success at Southwest Creek that day was merely temporary.

On 8 March, in the wake of the Federal debacle, much-needed Union reinforcements arrived on the scene, and Maj. Gen. John M. Schofield, Union leader of the Department of North Carolina, took command. During the next two days, Hoke and Hill attempted to exploit their success, but they encountered stubborn resistance, with neither army gaining further advantage. Bragg ordered the Confederates to fall back toward Kinston on the night of 10 March. Just over one week later, the same Confederate soldiers would take the field at Bentonville, the last and largest battle of the war in North Carolina.

Although the Battle of Wyse Fork did not play a significant role in the outcome of the war, it did provide General Johnston with the time he desperately needed to put together an army to confront Sherman. It also served as a lethal reminder to Union forces that the Confederate soldiers in North Carolina were still willing to fight.

Mark L. Bradley, Last Stand in the Carolinas: The Battle of Bentonville (1996).