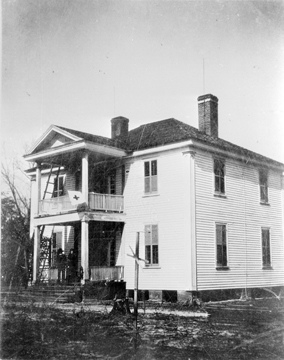 6,000 acres on which the Civil War Battle of Bentonville (19-21 Mar. 1865) was fought. This was the last major Confederate open-field offensive of the war and the largest land battle ever fought in North Carolina. A monument to mark the common grave of 360 Confederates was erected by the Goldsboro Rifles in 1893, and in 1927 the United Daughters of the Confederacy commemorated the battle by erecting the North Carolina Junior Reserves monument near the point where the main Confederate line crossed the Goldsboro road.

Frequent attempts were made to acquire, mark, and preserve the battleground, but only in anticipation of the centennial of the battle did the General Assembly appropriate funds and authorize the development of 51 acres as a North Carolina State Historic Site. Included in the purchase were the Harper House, which had been used as a hospital during the battle, the cemetery, and part of the Union earthworks. Interested citizens came forward and raised funds to erect a visitors center, and in 1961, the General Assembly provided additional funds. Further support from state and private sources became available. In 1996, with the assistance of the National Park Service, Bentonville Battleground State Historic Site was designated a National Historic Landmark. In the same year, a grant from the Recreation and Natural Heritage Trust Fund resulted in the purchase of an additional 21 acres.

Historical material is displayed in the visitors center, and on the grounds there are several monuments, reproduced field fortification exhibits, and historic entrenchments. Summer "living history" programs are held at the battlefield, as well as Confederate Memorial Day (10 May) ceremonies and artillery demonstrations. Every five years, the site sponsors a major reenactment of the battle on the weekend closest to its anniversary.

Mark L. Bradley, Last Stand in the Carolinas: The Battle of Bentonville (1996).