Granite is the official State Rock of the State of North Carolina. It was designated as the State Rock in 1979 by the N.C. General Assembly. 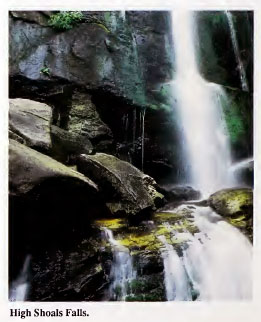 Granite is a massive igneous rock with a crystalline texture containing feldspar, quartz, and one or more dark iron silicate or ferromagnesian minerals, usually biotite or hornblende. The granite in North Carolina is described as first in quality in the southeastern states and second in quantity to that of Georgia. In 1980 the state's granite production was sixth in the United States, with ten quarries in five counties: Avery, Mitchell, Rowan, Surry, and Watauga. The earliest recorded granite quarry was in Wake County southeast of Raleigh about 1805 for local use. A second quarry east of Raleigh in a granite gneiss supplied stone for building the State Capitol in 1833-36. Rowan County had quarrying near Salisbury before the Civil War, as did Davidson County near Lexington for the courthouse in 1856 and piers for a railroad bridge. Stone for Davidson College was excavated in Iredell County in the same era.

Modern quarrying methods and improved transportation to markets encouraged expansion of the industry in the late nineteenth century with numerous openings extended or begun. Crushed stone from scrap has been sold for road metal as an important complement to dimension stone production.

Types of granite found in North Carolina include Balfour pink, a rose to pink granite from Rowan County that has been sold as "Salisbury pink" and "Arabian pink" since before 1860; gabbro, dark gray to black granite with dark minerals predominant that was quarried by the Old Consolidated Granite Company in Rowan County as black granite about 1902 and shipped as monument stock to locations up and down the eastern seaboard; orbicular diorite, granite in which dark green nodules of hornblende occur in a white matrix of feldspar, which is unique to Davie County near the Yadkin River; and Mount Airy granite, a white to light gray biotite granite of uniform texture and color found in Surry County northeast of the city of Mount Airy. In 1979 granite was designated as the official state rock.