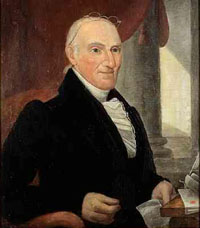 Montfort Stokes (1762-1842) served in the U.S. Senate prior to his term as governor, a post from which he resigned in 1832 to accept President’s Andrew Jackson’s appointment as chairman of a federal Indian commission. Stokes was born in Lunenburg County, Virginia, on March 12, 1762, the eleventh child of planter David Stokes and the former Sarah Montfort. He went to sea as a youth of thirteen, and during the Revolution enlisted in the Continental Navy. Following the Revolution, he settled briefly in Halifax and then in Salisbury, where he read law under his brother John and began a lifelong and politically important friendship with Andrew Jackson. His first wife was Mary Irwin of Tarboro, whom he married in 1790. His second wife, whom he married in 1796, was Rachel Montgomery of Salisbury. Together, the two marriages produced eleven children.

From 1786 to 1790 and from 1799 to 1816, he served, respectively, as assistant clerk, and clerk of the state Senate. In 1804 he declined an opportunity to complete an unexpired term in the United States Senate, and on numerous occasions was chosen a presidential elector on the Republican ticket. Stokes moved to Wilkes County about 1810, and during the War of 1812 held the rank of major general in the state militia. In 1816 he was selected by the General Assembly to fill the Senate seat vacated by James Turner’s resignation, after which he served in his own right until 1823. As a senator, his committee work focused on the District of Columbia and on postal and military affairs. Initially identified with the policies of John C. Calhoun, he later embraced Jacksonian democracy. Conspicuously more liberal than his Senate colleague from North Carolina, Nathaniel Macon, he opposed the further extension of slavery in the Missouri Compromise, and expressed his support for a constitutional amendment to abolish slavery. In 1823 he was replaced in the Senate by former governor John Branch.

Returning to North Carolina, Stokes chaired the reform convention of 1823, and in 1824 was defeated for the governorship by Hutchins G. Burton. In 1826-1827 and in 1829-1831, he represented Wilkes in the upper and lower houses, respectively, of the General Assembly. Stokes was elected to his first term as governor on December 17, 1830, defeating Richard Dobbs Spaight Jr., of New Bern. Despite strong opposition from the eastern part of the state, he won election to a second the following year.

As governor, Stokes was strongly identified with the interests of western North Carolina, political and constitutional reform, internal improvements, and a sound banking system. Only secondarily did he lend his support to the tentative efforts underway to provide for public education. During the widespread hysteria following the Nat Turner uprising of 1831, he acted with firmness and moderation to minimize violence. Against the backdrop of national politics, Stokes was a strong supporter of Andrew Jackson and a vocal opponent of nullification. Repeatedly he denounced that doctrine as inimical to the Union.

In November of 1832 Stokes resigned his governorship to accept President Jackson’s appointment as chairman of a federal commission charged with the resettlement of Indians from the southeastern United States. Relocating to Fort Gibson in present-day Oklahoma, he continued to work with Indian affairs for the remainder of his life. Stokes died at Fort Gibson on November 4, 1842, and was buried near the post.