Shipwrecks in past centuries were so prevalent along the North Carolina coast-the shallow waters offshore strewn with the ruins of wrecked vessels-that the area became known as the "Graveyard of the Atlantic." At one spot, part of the pilothouse of a recently sunken trawler almost touches the skeletonlike timbers of a wooden schooner. At another, the eerie hulk of a German submarine rises from the ocean floor. In the vicinity of the North Carolina capes, where the sand shoals are in constant flux, the outline of an entire vessel can be visible to a diver one day but indiscernible beneath the sand the next. 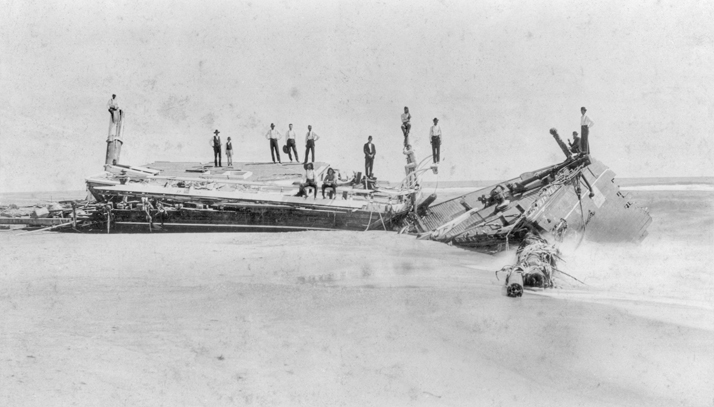 Conditions at Cape Hatteras, long dreaded by mariners, are a major reason for the large number of shipwrecks. There, the cold waters flowing down the coast from the north collide with the warm Gulf Stream current coursing up from the tropics. During the heyday of the coasting trade in the nineteenth century, southbound sailing vessels often were unable to round Cape Hatteras for weeks because of the combined forces of the steady northbound Gulf Stream flow and the prevailing winds from the southwest. Old-timers at Kinnakeet, north of the cape, have recounted seeing as many as 150 sailing ships, tacking back and forth, waiting for the wind to change. Often, when the shift finally came and the wind blew suddenly from the north, one or more of the tacking vessels would end up on the shore.

The absence of a dependable harbor of refuge between Chesapeake Bay and Beaufort Inlet, a distance of more than 200 miles, also contributed to the enormous toll of shipping, especially along the Outer Banks. Inlets had a tendency to close without warning, and the channels in even the more established ones shifted nonstop. Also, it was difficult for a mariner unfamiliar with the low-lying coastline to figure out the difference between an inlet and a low section of beach, and more than one shipwreck resulted when the master finally realized that the inlet toward which he had been heading was a mirage.

The loss of more than 1,000 vessels has been verified in the shipwreck inventory conducted at the Outer Banks History Center on Roanoke Island. Undoubtedly hundreds more were lost before accurate records were kept, or they simply disappeared without a trace. The carnage started early, with the loss of Spanish ships returning home via the Gulf Stream route after looting the treasure troves of the Caribbean and Central America.

Early explorers and colonists, including those sent by England's Sir Walter Raleigh, suffered their share of misfortunes. As the Carolina settlement grew, seaborne traffic increased between the ports of the colony and its trading partners in such divergent places as New York, Barbados, and London. The sailing vessels proved no match for the elements, especially when hurricanes struck; newspapers throughout the colonies frequently printed reports of shipwrecks during storms.

Even the largest sailing craft-brigs, barks, and schooners-seldom carried a crew of more than a dozen or so and only a handful of passengers, if any. The introduction of the steamboat resulted in a dramatic change, for the sleek new steam packets were designed specifically to carry passengers. These long, narrow craft-better suited for service on interior waters than for the run from northern ports to Charleston, S.C., or Savannah, Ga.-maintained steady speeds of up to ten miles an hour. Fitted out with what were often advertised as commodious accommodations, they appealed to ever-increasing numbers of travelers, who had to choose between an overland trip that could take weeks or the uncertainty of passage by sail.

The first reported wreck of a steamboat on the North Carolina coast occurred in October 1836, when the navigator of the packet William Gibbons, miscalculating that he had cleared Cape Hatteras on the run from New York, turned to the southwest heading and ran his vessel ashore. Residents of Chicamacomico, where the William Gibbons ended up at night on the inner bar, assisted with the rescue of its 140 passengers, including 32 women and 14 children, and no lives were lost. Less than a year later, when the Home ran aground at Ocracoke, those on board were less fortunate. Only about 40 of the 130 passengers and crew survived, despite a chronicle of heroism seldom equaled in the annals of North Carolina shipwrecks. The next year approximately 100 people died when the steam packet Pulaski foundered off the New River.

The carnage along the coast has been especially heavy during times of war. More than 60 vessels were lost, by shipwreck or gunfire, during the Civil War; at least 15, most sunk by German submarines, in World War I; and approximately 90 more in less than a three-year period during World War II, including three German submarines and many of their victims.

Two shipwrecks within a span of less than three months in the winter of 1877-78-the USS Huron at Nags Head with approximately 100 crewmen lost and the Metropolis at Currituck Beach with 85 dead-resulted in quick action by Congress to increase the number of lifesaving stations along the North Carolina coast. Surfmen from these stations, originally members of the U.S. Lifesaving Service and later the U.S. Coast Guard, saved hundreds of vessels and rescued untold numbers of shipwreck victims. There was little they could do, however, when the five-masted schooner Carroll A. Deering was discovered hard aground on Diamond Shoals one stormy night in January 1921, its sails fluttering in the wind, food set out in the galley, but no sign of human life on board. The mystery of this "Ghost Ship of Diamond Shoals" was never solved.

The advent of radar, loran, sonar, and other breakthroughs in technology ended the time when shipwrecks were the norm along the North Carolina coast.

Bland Simpson, Ghost Ship of Diamond Shoals: The Mystery of the Carroll A. Deering (2002).

James Sprunt, Derelict: An Account of Ships Lost at Sea in General Commercial Traffic and a Brief History of Blockade Runners Stranded along the North Carolina Coast, 1861-1865 (1920).

Graveyard of the Atlantic Museum: http://www.graveyardoftheatlantic.com/

The Mystery of the Graveyard of the Atlantic.  By Carole Marsh.