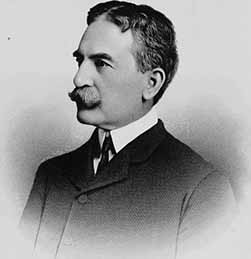 Joseph Ezekiel Pogue, Sr., tobacco manufacturer and Raleigh public official, was born September 13, 1851 in Rogersville Junction, Tennessee in Jefferson County, to Reverend John Pogue, a Methodist minister, resident of eastern Tennessee, farmer, and civil magistrate, and Priscilla Carter Pogue.  Joseph Pogue is known for his promotion of agriculture and the betterment of the State, especially in the Raleigh area.

Pogue was raised in the country on a farm where he worked for 7 years in his youth and was educated in Locust Grove, Hamlin County, East Tennessee.  He attributed much of his success to the practical experience and character development from his early days working on the farm.  In January of 1870 when he was 18, Pogue left East Tennessee and moved to Hillsborough, NC, where he clerked at a general store for his brother E. H. Pogue until September 1871.  He then connected with a tobacco factory and began traveling as a tobacco salesman throughout the South. In 1875 he moved to Henderson, NC, where in October of that year he began manufacturing plug tobacco, developing a reputation for high-grade tobacco and expanding his sales throughout the surrounding states.  In September 1885, Pogue moved his plant to Raleigh, where he expanded his business and became the first plug tobacco factory in the city, continuing to manufacture until selling out around 1904.  His tobacco was described as, “some of the most meritorious and popular brands of chewing tobacco ever put upon the market.”  Pogue was a part of an important era in the tobacco industry of North Carolina, joining the business in the very beginning of its rapid and auspicious takeoff.

Following Reconstruction, the South struggled to reach economic independence and to catch up to the highly industrialized North. Southern entrepreneurs striving for a “New South” advocated for and took part in the building of railroads and factories at a pace that was unprecedented. One of the states affected most by the post-Civil War industrial movement was North Carolina, and it was the dramatic increase in the manufacture of tobacco that caused the gradual urbanization within the state. Reasons for this sudden boom in the tobacco industry can be attributed to a combination of factors—declining cotton prices that incentivized farmers in the Piedmont region of North Carolina to plant more tobacco plants, technological advances that launched the mass production of cigarettes, a more connected system of railroads that allowed the transport of tobacco products to national and international markets, and the entrepreneurship of leaders in this blossoming industry.

Large manufacturers of tobacco products did at times build their facilities in North Carolina; however, local businessmen often owned and operated the North Carolinian tobacco facilities and warehouses. These businessmen were entrepreneurs who, much like Pogue, used their experience with tobacco culture to assume leadership positions in the industry and their communities.  The wealth and prestige they accumulated through their business gave them political and social esteem in the tobacco towns of eastern North Carolina, granting them the opportunity to hold seats in local chambers of commerce and boards of trade, as well as giving them the ability to donate to and become involved with many public works. They became highly influential members of their communities and often times of the entire state.

Just like many of the tobacco entrepreneurs of this time period, Pogue firmly established the confidence of his community, and became highly esteemed socially and involved with many public positions and programs. In 1891 he was elected onto Raleigh’s board of aldermen, where he served for two years.  As alderman, Pogue advocated for the improvement of streets and was “largely instrumental” in improving the fire department, which in turn lowered insurance rates in Raleigh. He also introduced the resolution for celebrating Raleigh’s 100th anniversary in 1892, which was adopted April 1, 1892. The mayor then appointed Pogue as part of the committee, which would devise the ways and means for the celebration.  The event was held October 18-20, 1892.  Additionally, Pogue was a member of “The Board of Managers of the Raleigh Centennial,” on the Committee on Programme and the Committee on Finance.  He was also a Field Marshal for the parade, commanding the Fourth Division, which featured the city’s fire department. 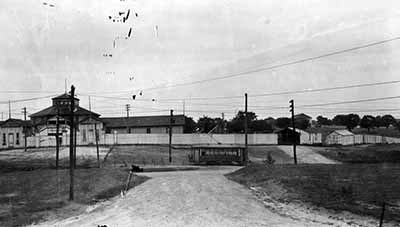 In the spring of 1899, Pogue became the Secretary of the North Carolina Agricultural Society, the organization sponsoring the State Fair. He maintained this position for many years until resigning in 1922.  While in this position, Pogue was instrumental in the enlargement of grounds, purification of the fair’s midway, and building up the event to become more attractive each year.  He accomplished this through active participation in the organization and through the investment of $40,000 in new buildings while in office. These measures, along with providing a premium list that attracted a wide and characteristic list of exhibits, paid off and quadrupled gate receipts. It was thought that under his management, the fair had “probably contributed more to the awakening of the capital city than any other one factor,” bringing in more than 50,000 citizens annually, and no less than $100,000 to Raleigh. The fair was advertised all over the country.

When the fair moved to its present location, the area it used to be held at was turned into the Fairmont developments that are located on the other side of Hillsborough Street from present day North Carolina State University.  This area was named Fairmont after the fair, with names of some of the streets given fair-related names. An example of this is Horse Track Alley, as well as Vanderbilt Avenue, Pogue Street, and Horne Street. These streets were given the names of important members and officers of the NC Agricultural Society.  Pogue Street is the location of the old racetrack, encircling the present day Raleigh Little Theater, amphitheater, and Rose Garden.

Pogue was also for a time the President of the Raleigh Tobacco Board of Trade and the President for the Board of Directors for the State School for the Blind in Raleigh.  On November 4, 1915, the school celebrated their 70th anniversary, and at the event Pogue read a historical narrative of the school.  As of 1915, attendance had increased from 186 to 414 since 1896.   Under the same management as the white department, and thus also under Pogue’s management, North Carolina was the first state to provide an institution for “the colored race.”

Pogue was made Commissioner-General for the North Carolina Commission of the Jamestown Exposition of 1907.  The event was to celebrate Jamestown, Virginia’s tercentennial and was held from April 26 to December 1, 1907.  Pogue was a “regular” member of the State Literary and Historical Association, which had a few years previously fought for the establishment of the North Carolina Historical Commission, a state organization established by the General Assembly. The Commission appropriated $100 to aid the History Committee of North Carolina Commission of the Jamestown Exposition for their exhibit.  Pogue was also featured in the acknowledgments for providing financial support to the historical exhibit.

In addition to his donations and leadership, Pogue played an important role in the protection of funds that were allocated to North Carolina’s exhibit in the separate Jamestown exhibit for black Americans. Congress appropriated $100,000 to the participating states for their exhibits on black culture and progress in America, and the Negro Development and Exposition Company of the United States of America, with headquarters in D.C. and Richmond, was formed to oversee the exhibit and dispense Congress’ funds. Charles N. Hunter, a prominent black advocator for stronger race relations, helped form the Negro Development Company, and through this group worked on North Carolina’s black culture exhibit for the Exposition.  Hunter realized that even with the money from Congress, they lacked sufficient funds to collect artifacts for the exhibit. He appealed to the pride of white North Carolinians for their state and lobbied in order to procure money from the state for their exhibit.  He was successful in his attempts and received $5,000, making North Carolina the only state whose legislature appropriated special funds for the black exhibits at Jamestown. Neither Hunter nor the North Carolina General Assembly believed the national Negro Development and Exposition Company was capable of managing the funds, so Pogue was selected to control their funds.

As expected, once learning of the special appropriation given by the state, the Executive Committee of the Negro Development and Exposition Company tried to take control of the funds, and later attempted to dispossess black North Carolinians of their fair share of federal funds. Pogue met with them regarding the matter, and told Hunter later that “whites would do anything possible to ensure the success of the black exhibit” and that “we are going to stand by you in every particular.”  Both Hunter and the then governor of North Carolina, Robert Glenn, saw the appropriation given by the state of North Carolina as an ideal opportunity to strengthen race relations and for whites to show their friendship and give encouragement to the black community.  Pogue’s role as protector of their funds was essential to the outcome of the situation.

Pogue was also a member of the Democratic Party, the Independent Order of Odd Fellows, the Improved Order of Red Men, and an honorary member of the Junior Order of American Mechanics, as well as the Country, Capital, and Rotary clubs in Raleigh.  In the Odd Fellows, he was a member of the Seaton Gales Lodge No. 64 and represented in the meeting of the Grand Lodge of the State, and in the Red Men, he was a Great Junior Sagamore in the State Council.  He is often referred to as Colonel Pogue in writings, and since there is no evidence of him having served in the military, it is likely that he obtained the title through the uniformed branch of one of these fraternal organizations of which he was a member.

On February 20, 1884 he married Henrietta Kramer of Raleigh, daughter of Nathan and Fanny Kramer.  Henrietta was educated at the prestigious St. Mary’s school in Raleigh. Pogue and his wife had one son, Joseph Ezekiel Pogue, Jr.,   who became an accomplished geologist, petroleum engineer, and economist.

At 74, Pogue died the morning of August 5, 1926 in Roosevelt Hospital, New York, where he had been for about a month undergoing treatment for stomach cancer.  He is buried in Raleigh’s Oakwood Cemetery along with his wife, Henrietta.

“Fairgrounds across from Patterson Hall on Hillsborough Street” circa 1910. https://d.lib.ncsu.edu/collections/catalog/0012854