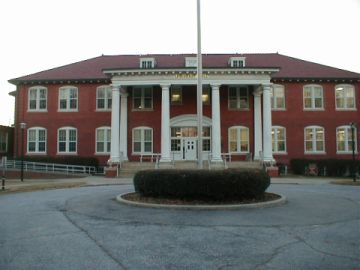 The Governor Morehead School, North Carolina's school for the blind, opened in 1845 as the North Carolina Institution for the Education of the Deaf and Dumb and the Blind. This state-supported, educational program for students with disabilities was one of the first of its kind in the South. William D. Cooke of the Deaf and Dumb Institution at Staunton, Va., wrote to North Carolina governor John Motley Morehead in 1843 suggesting that enough students could be recruited from North Carolina's "deaf-mutes," then estimated to be about 280, and from the overflow at the Staunton school to start a private school in North Carolina. Morehead, already an advocate of educating citizens with disabilities, brought his correspondence with Cooke to the attention of the Presbyterian Synod of North Carolina when it met in Raleigh in 1844 and gained their support. Later in 1844, Morehead sent a message to the General Assembly suggesting the establishment of a public school for the "deaf, dumb, and blind."

On 8 Jan. 1845, the legislature approved an act "to provide for the education of the poor and destitute deaf-mutes and blind persons in this State." This act provided $5,000 annually from the Literary Fund and established that $75 for each handicapped student be paid yearly by the county from which he or she came. A building on Hillsboro Street (modern-day Hillsborough Street) in Raleigh, two blocks west of the capitol building, was rented, four teachers were employed, and the North Carolina Institution for the Education of the Deaf and Dumb and the Blind opened on 1 May 1845. Cooke was elected principal (a title applied to the head of the school until 1918) and opened the school with 23 deaf students between the ages of 8 and 32 who attended classes in reading, writing, arithmetic, history, geography, domestic and industrial arts, and the Bible. With a $15,000 appropriation by the legislature, land for a new school was purchased around 1849 on Caswell Square in Raleigh at the intersection of Jones and McDowell Streets, and a board of directors was established.

Blind students were not enrolled in the school until 1851. Cooke established vocational classes for older students. Blind girls were taught knitting, and deaf girls were taught sewing; blind boys were taught broom making, and deaf boys were taught shoe making and printing. The Annals for the Deaf was published at the school for several years, and in 1851 the Deaf-Mute Casket appeared under Cooke's editorship. The Casket was the first paper printed for and by deaf students in one of their own schools. Books for the blind, using raised letters, were also produced. Printing was done for the public, and some tradespeople in Raleigh complained about the competition. In 1858, the school enrolled 39 deaf and 18 blind students.

In 1867 North Carolina first addressed the need for a school for deaf, dumb, and blind African Americans. The U.S. War Department agreed to pay rent for a suitable building and to supply rations, and the North Carolina Institution for the Education of the Deaf and Dumb and the Blind was asked to provide teachers and supervision. The "Colored School" opened on 4 Jan. 1869 in a building rented from the American Missionary Association in southeastern Raleigh with 21 deaf students and 7 blind students. This was the first school for African American blind students in the United States.

The General Assembly appropriated money for the establishment of a separate school for white deaf students in 1891. When this new school in Morganton opened in 1894, white blind students remained on Caswell Square in Raleigh, and black blind students and black deaf students remained on South Bloodworth Street in Raleigh. John E. Ray became principal of the North Carolina Institution for the Education of the Deaf and Dumb and the Blind in 1896. Enrollment reached 535 in 1912, making the school the largest of its kind in America at the time. Through Ray's efforts, the General Assembly passed a law for the compulsory school attendance of the blind, which now requires blind students between the ages of 7 and 18 to attend school. In 1905 the name of the institution was changed to the State School for the Blind and Deaf, and in 1913 $30,000 was appropriated by the General Assembly to purchase a 75-acre tract adjoining Pullen Park in Raleigh. With an additional $150,000 from the legislature in 1917, plans were made to move the school for white blind students to the current location on Ashe Avenue in Raleigh.

In 1967 the General Assembly and the board of directors announced plans for the phasing out of services for black deaf students at the Garner Road campus and for transferring those students to the "two other Schools for the Deaf in North Carolina" (in Morganton and Wilson). During 1968 new superintendent Samuel Cole began his term, and a study published by a private architectural firm indicated that the Ashe Avenue campus was the more desirable location for a one-campus site for black and white blind students. By 1971 the consolidation was complete. The newly formed Governor Morehead School received reaccreditation by the Southern Association of Colleges and Schools in 1972 and conducted its first summer camp in 1974 at the F. B. Simmons Future Farmers of America Camp in Swansboro. In 1979 the board of directors approved the school's seal, which featured a bell, and recommended the school motto be selected by the students and staff. The motto selected was "By Faith, Not By Sight." The modern Governor Morehead School offers complete educational and residential programs for visually impaired students from North Carolina, preschool through age 21.

Manuel H. Crockett and Barbara C. Dease, Through the Years, 1867-1977: Light Out of Darkness: A History of the North Carolina School for the Negro Blind and the Deaf (1990).

Governor Morehead School for Blind. Image available from the Department of Health and Human Services. Available from  http://www.ncoes.net/GMS.shtml (accessed September 18, 2012).

will be seeing you soon.

will be seeing you soon. waiting on finall papers.