Reprinted with permission from the Old Baldy Foundation, Inc., 2008. 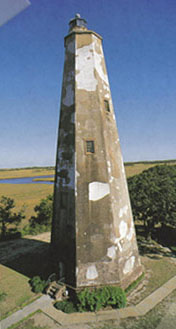 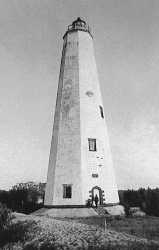 Old Baldy is the oldest standing lighthouse in North Carolina. It has maintained its original form and location for over 187 years. The most important purpose of Old Baldy was to mark the Cape Fear River entrance for the maritime sailors.  It was never intended as a light for Frying Pan Shoals.  Old Baldy was built in 1817 of soft red bricks covered with stucco.  In the early days the lighthouse keeper would white wash Old Baldy every two years. When Old Baldy was deactivated in 1935 the lighthouse was abandoned. The white wash protected the stucco. When it was discontinued large pieces of the stucco began to fall off the lighthouse. Occasionally someone would come along and patch the lighthouse with new stucco; however, they did not use the same stucco as was used in 1817.  Today Old Baldy looks like a patch work quilt of different stuccos.  In 1817 Old Baldy was completely white.

The original fixed light was powered by 15 lamps. It was built as a parabolic reflector with hollow wick lamps, fueled by whale oil, and arranged on a metal rack. Over the years, Old Baldy’s light has changed as a signal. In 1834, a new lighting mechanism was installed to flash red with a 30-second delay. During the Civil War, the lighthouse was encompassed within the earthwork walls of Fort Holmes, as 1,100 men were stationed and living at the fort under Old Baldy’s watchful gaze. Temporarily darkened, the light was relit in 1879.

In 1893, the flashing light of Old Baldy was changed to white and new lamps were installed. In1903, Old Baldy became a fourth order fixed light when the Cape Fear Lighthouse Station was activated. Old Baldy was kept as an active light station by the government until 1935, and was even used as a radio beacon in World War II. In 1988, the historic light was relit but no longer serves as an “official” navigational aid.

Today, Old Baldy Lighthouse and the adjacent reconstructed keeper’s cottage are open to the public. Throughout the year, you can take a ferry to Bald Head Island, and then climb to the top of Old Baldy. Every year during the first weekend in August, Pirates invade the island and Old Baldy in celebration of National Lighthouse Day. AARGH!!!

Old Baldy by the Numbers 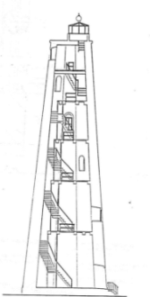 - A ladder into the lanthorn (lantern room)