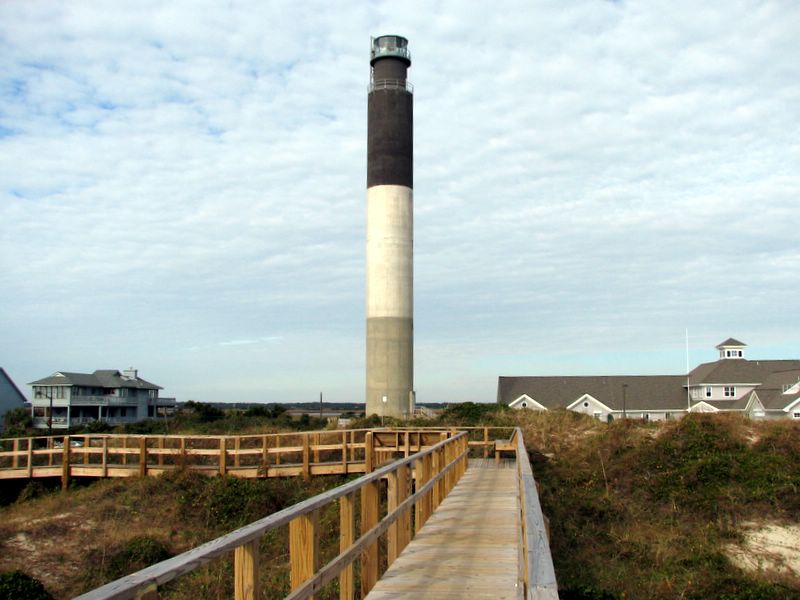 The automated Oak Island Lighthouse was completed in 1958 at a total cost of $110,000.00 to replace a manned lighthouse on Bald Head Island. The lights are 169 feet above the water and can be seen for 24 nautical miles. The actual structure is 153 feet tall, but it stands on a slight rise, and therefore, the height of the light above the water is 169 feet, as is reported on nautical charts. The tower is designed not to sway at all in a 100 mile per hour wind. There is no spiral staircase as found in most older lighthouses, but instead you find a series of ships ladders with a total of 131 steps to the gallery level.

The base is set upon 24 concrete-filled steel pilings 10 3/4 inches in diameter and 67 feet deep. The pilings are capped by a 30 foot wide by 3 foot deep octagonal concrete base upon which the tower structure was built. The main tower is 128 feet tall, built of monolithic reinforced concrete. It was poured continuously into a movable form that was raised by jacks at the rate of about one foot per hour. To accomplish this task a concrete mixing plant was set up on the site to allow for the continuous 24 hour a day operation for 7 days. The tower has a uniform inside diameter of 16 feet 4 3/4 inches. The wall is 8 inches thick, and the three stripe color pattern is permanently cast into the concrete. The first 40 feet is the natural gray of Portland cement. The next 50 feet was poured with white Portland cement and white quartz aggregate for the white color. The top 52 feet is gray Portland cement with black coloring. The smaller diameter concrete section at the top was formed with stationary metal forms after the top floor was poured. Windows in the tower were constructed of stainless steel but sashes have been replaced with vinyl. The 11 foot tall aluminum lantern housing was installed by Marine Corps helicopters.

The characteristic flashing pattern for the light is four one-second flashes every 10 seconds. There are two banks of four, 1000-watt, 125-volt GE Quarzline lamps, the same as those used in the film and theatre industries. The top bank of four lights is used for normal operation, and the lower bank is used only for backup.

When the lighthouse was activated in 1958 carbon-arc mercury lamps were used in 36-inch reflectors. These reflectors with their housings were adapted from aircraft spotlights used in World War II. When these lamps were in use, the Oak Island light was the second brightest in the world. Today the brightest light along this part of the Atlantic coast is the Sullivan’s Island Light near Charleston, South Carolina which was erected in 1962.

In 1888 the U.S. Congress authorized the transfer of a small parcel of land at the entrance of Fort Caswell from the U.S. Army to the U.S. Life Saving Service for the first Oak Island Life Saving Station. The original 1889 life saving station house has been moved across the street from the current Coast Guard station’s main gate and is now a private residence. In 1889 there was one station keeper, six surfman and one rowed lifeboat. This original building was used until a new larger 10,000 sq. ft. Coast Guard facility was built in 1992. However, this new structure was accidentally burned down February 1, 2002 with no loss of life or injuries. The replacement Coast Guard building was commissioned in July of 2004.

Photo by the Friends of the Oak Island Lighthouse in Brunswick County, December 2005. Courtesy and copyright of the photographers.