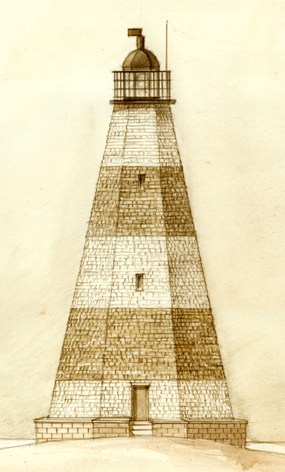 The dangers of the Lookout Shoals were well known to mariners. Early maps identify this area as Promontorium tremendum, which translates to horrible headland or cape terrible. The combination of shoals (shallow waters),the convergence of currents, and the tendency for rapidly developing stormsmade this area particularly dangerous. It became apparent that a lighthouse was needed to warn ships in the area.

In 1789, Congress established the Department of the Treasury and gave control of the lighthouses built by the colonies to this department. The light station at Cape Lookout was authorized in 1804 and four acres of land were purchased from Joseph Fulford and Elijah Piggot the following February. But, the first request for project bids only received one offer. It would be several years before the first tower was completed.

The project description called for an octagonal lighthouse with a brick interior, wood exterior, and stone foundation. It was to be built on a sand dune and rise 95 feet from the ground to the floor of the lantern room-107 feet in total height. By all indications, this designwas followed. However, the project called for the tower was to be painted with white and brown stripes while a 1847 record indicates that the stripes were red and white.

It did not take long before mariners realized that this lighthouse was insufficient. The tower was too short and the light was too weak for ships to see it in time to avoid the shoals. This problem was perhaps best summarized by Navy Lieutenant H.J. Hartstene, commander of the mail steamer Illinois, in a letter written in 1851: "The lights on Hatteras, Lookout, Canaveral and Cape Florida, if not improved, had better be dispensed with, as the navigator is apt to run ashore looking for them."

Extensive repairs were made to the tower in 1820. Both the tower and the keeper's dwelling were again in need of serious repair in 1851. Money was appropriated six years later for the construction of a new, taller lighthouse. 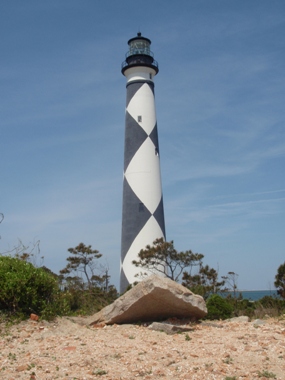 New Use for an Old Lighthouse

Once the second Cape Lookout Lighthouse was completed in 1859, the lamps were removed from the original tower. In 1860, the first lighthouse was converted to housing for the keepers of the new light.

War broke out less than two years after the second lighthouse was completed. Both towers came under Union control in 1862. The following year, a small group of Confederate troops attempted to destroy or disable the 1859 lighthouse, and possibly the 1812 lighthouse as well. Although they succeeded in destroying the oil supply and damaging the iron staircase in the 1859 lighthouse, both towers survived the raid. More information can be found on the Cape Lookout Light and the Civil War webpage.

It is unclear how long the 1812 lighthouse survived. It was included in a January 1869 list of lighthouses compiled by the Light House Board. However, it had disappeared by the time of the 1893 survey of the light station complex. It is possible that it was dismantled after the new Keepers' Quarters was built in 1873. Today, all that remains of the first Cape Lookout Lighthouse is a pile of rubble on a sand dune.

The second Cape Lookout Lighthouse, completed and lit on November 1, 1859, replaced the shorter 1812 lighthouse. The double wall structure--the first of its kind in North Carolina--allowed the tower to be much taller than previous designs. The first order Fresnel (pronounced Frey-nel) lens was installed in the new tower. The 1859 lighthouse was 163 feet tall and its light reached approximately 15 miles out to sea.

Shortly after the improved tower was activated, however, war broke out between the states. The light was extinguished to prevent Union ships from using it to navigate the treacherous North Carolina coast. The light was reestablished with a third order Fresnel lens in 1863 and shone for most of the remainder of the war. For more information, visit the Cape Lookout Light and the Civil War webpage.

The original Fresnel lens was sent to France for repairs following the war and was reinstalled in 1867. The iron staircase, damaged in a Confederate raid, was also repaired that year.

Whale oil was used initially to power the lamp. Due to rising costs, the Light House Board switched to using mineral oil (kerosene) in 1873. The wick lamp w 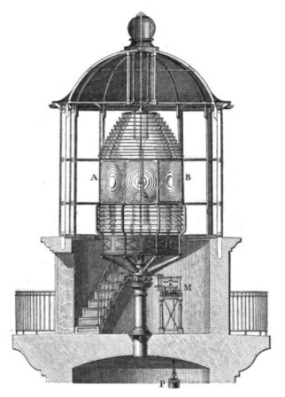 as replaced by an incandescent oil vapor (IOV) lamp in 1912, increasing the visibility to 19 miles. Generators supplied electricity for the new equipment. The light became automated in 1950: the light turned itself on and off automatically but required Keepers to fill the generators. Two aero-beacons replaced the Fresnel lens in 1975.

The lighthouse continued to use generators until an underwater cable from Harkers Island was laid in 1983. At that time, the Cape Lookout Light Station was decommissioned and responsibility for the lighthouse was transferred to the Coast Guard Station at Fort Macon.

On July 14, 2003, the Coast Guard transferred the tower and remaining property to the National Park Service in order to allow the lighthouse to be opened for public climbs. The light itself is still maintained by the Coast Guard. 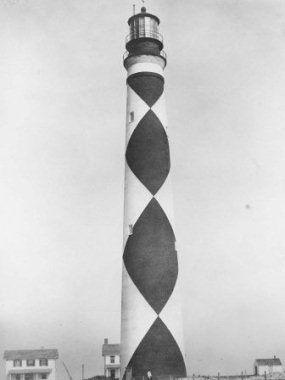 When it was first built in 1859, the second lighthouse was a simple red brick tower as was the Cape Hatteras Lighthouse (1870), the Bodie Island Lighthouse (1872), and the Currituck Beach Lighthouse (1875). The Light House Board decided that each coastal lights would be assigned its own distinctive daymark, or color pattern. This would allow mariners to determine their location during the day in the same way that light flash patterns did at night. In 1873, the Cape Lookout lighthouse was painted with its distinctive black-and-white diagonal checkers (or "diamonds").

The original light was steady with no flash pattern. In 1914, however, this changed when an occulting device was installed, driven by a clockwork mechanism, which established a flash pattern for the light. The chain for the clockwork was so long that a hole had to be cut in the lantern room floor and two of the iron steps had to be altered. With the installation of the electric IOV lamp in 1933, the flash pattern became more complex. It was on for 2 seconds, off for 2 seconds,on for 2 seconds, and off for 9 seconds. Today, the light "flashes" once every 15 seconds as the beacons rotate.

What about more info on the

What about more info on the fishies in the ocean nearby?

thank you so much

thank you so much