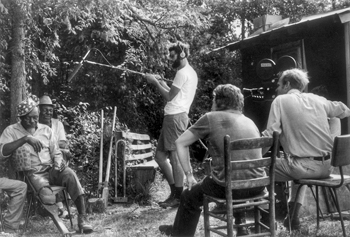 Medicine shows, from roughly the end of the Civil War through the 1940s, provided a frequent and vital form of rural entertainment throughout North Carolina and the South. Medicine shows also served as the training ground for hundreds of blues and "hillbilly" musicians and comedians, who lacked few alternate venues until the development of radio after World War I.

During the era before mass entertainment, medicine shows encountered little competition for audiences. Small-town residents flocked to see the free, touring shows with little regard to their quality. The announcement of a free show usually preceded the beginning of the musical presentation. The show's "doctor" generally served as master of ceremonies. Once the musicians had drawn a sufficient crowd, the doctor began pitching a cure-all product that rarely consisted of much more than a healthy dose of grain alcohol. The entertainers usually worked the crowd, actually handling the sales while the doctor told of the nostrum's wondrous powers. Sometimes medicine shows were led by an American Indian entertainer. A famous example is Leo Kahdot, a Potawatomie Indian from Oklahoma. As "Chief Thundercloud," Kahdot had begun his career as a vaudeville piano and trumpet player and became a fixture, along with other musicians, on the medicine show circuit.

Besides developing several generations of entertainers and spreading songs throughout the rural South before radio and phonograph recordings, medicine shows also shaped the early days of radio. Large-scale patent medicine companies, such as Crazy Water Crystals, transferred the medicine show concept to the broadcast medium by sponsoring live radio shows by "hillbilly" performers. In North Carolina, the Monroe Brothers on WBT in Charlotte and WPTF in Raleigh proved the most popular Crazy Water Crystals act.

A few medicine shows continued to tour increasingly smaller towns until about 1970. Pete Lowry recorded Peg Leg Sam and Chief Thundercloud in Pittsboro in 1972. The UNC Center for Public Television documented a number of medicine show veterans for its "Last Free Show" special in 1981.